Best of travel: Rampaging through Dartmoor in an Aston Martin 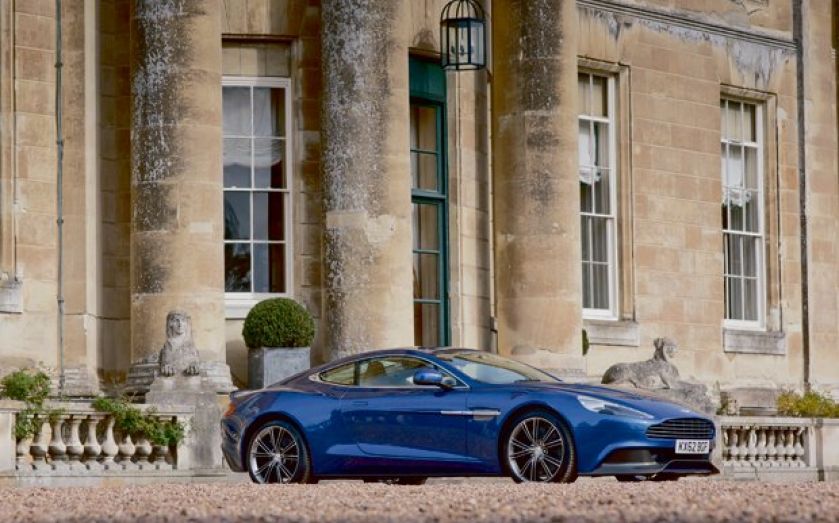 To tide us over until we’re able to travel again, we’re republishing classic travel stories from our archives. Today we revisit Adam Hay-Nicholls’ tour through the rugged terrain of Dartmoor in an Aston Martin Vanquish.

It’s the tail-end of dusk in Devon and silence is broken. Thundering down the twisting A382 from Exeter to Chagford, an ancient tin-mining town set on the upper reaches of southern England’s most rugged terrain, Dartmoor, the Aston Martin darts into a private road. Its V12 echoes through a dark tunnel of trees, skimming the edges of a stone bridge as it winds its way up to Gidleigh Park, the bark from its twin exhaust sending chills up the spine.

Read more: Should you look at Irish whiskey as an investment?

It comes as a surprise after such wild countryside to find Gidleigh Park, a Tudor-style Edwardian manor surrounded by woodland and set on the banks of the North Teign River, nestling in manicured grounds. Like the Aston Martin Vanquish in which I arrive, Gidleigh represents Blighty at its most picture perfect.

On the outside, both have beauty, character and heritage. And inside: luxury. I’d picked the right wheels, then, to take me to the hotel’s celebrated dining table – with none other than Michael Caines at the helm – and the Vanquish receives a glowing reception from the chef. Michael is a petrolhead, one I had previously met on the Formula One circuit where he sometimes cooks for the Williams team. He has a black 911 Turbo for the commute to Gidleigh, and a Porsche GT3 on order. The fact that his right arm is prosthetic – lost in a car accident 20 years ago – hints at the determination of the man who has picked up two Michelin stars along the way.

I opt for the signature menu: yellow fin tuna tartare, served with scallops, lime, Oscietra caviar, soused turnip and beetroot, and wasabi cream; foie gras terrine; salt cod with crab, chorizo and samphire; duckling with all the roast trimmings; beef fillet and cheek straight from a beast of the moor; cheeses from across the West Country; succulent apple mousse with apple jelly and sorbet; a lime and butterscotch banana parfait. When you’ve got Aston Martin’s range-topper for a bank holiday weekend, it’s not just the car that deserves premium fuel.

Read more: Pop quiz: How much do you really know about German wine?

Having made a small dent in the cellar’s 13,000 bottles it was time to retire to a room in the manor’s roof and plot the next morning’s driving route across the moor. The first destination was Padstow – for its renowned seafood – and, on my return eastwards, a night on another moor, Bodmin, at Jamaica Inn, a smugglers’ hang-out of literary fame. That allowed for a casual blast across Dartmoor, stopping off for walks between Tors – rocky outcrops over 100,000 years old.

The Vanquish burbled down tight country lanes, having to reverse for more than one startled tractor, and flew across the moor’s B-roads, overtaking packs of weekend cyclists. The roads are joyous, but you’re always covering the brake for sheep and ponies. Passing the perimeter wall of the notorious Dartmoor Prison it struck me that an Aston would be the dream getaway car for a 1960s gangster heist.

Parked above Princetown in view of that Dickensian fortress, wellies replacing driving shoes, I trudge around the car, taking in its shape for the first time in proper daylight. There’s a strong case for Astons being the most handsome cars on the road today. The Vanquish takes cues, as do all its family members, from those iconic DBs of the 60s but it’s actually the One-77 (a £1,150,000 hypercar of which just 77 were produced in 2009, and which was justly awarded the Concorso d’Eleganza design award for concept cars and prototypes) which is its main influence.

In the Vanquish, we have a meeting of the One-77 and the DB9, the more expensive car’s lines cutting into its flank. It is devastatingly attractive from every angle, a well-judged fusion of brawn and elegance, modernity and tradition. One criticism is that Aston’s styling progression since the DB9 (which is now 10 years old) has evolved too slowly. A decade on, is this new super GT bold enough? It doesn’t sting the eyes and singe the heart the same way the more brazen Ferrari F12 does. But that’s not really the point; Steinway pianos haven’t changed much in their history, and is there a more beautiful instrument? Rolex doesn’t feel the need to update the Submariner.

I’m in love with my car’s cobalt blue, which makes it stand out from the usual Aston roster of silver, grey, black, navy and green. It highlights the Vanquish’s black carbon fibre accoutrements. Indeed, what is under the paintwork is carbon also, to the benefit of its weight and handling. That goes some way to explaining its £190,000 price tag. The interior choices on this car come from what might be described as the Premiership Footballers’ option list, and it’s not entirely to my taste. Here we have a largely black hide interior (lovely) with yellow stitching that matches the brake calipers (I’m fine with that), yellow piping (hmm) and bright blue inserts in the seats and headrests that resemble leather bubble-wrap (pass).

Read more: Best of travel: The luxury yacht with more toys than Hamleys

The facia is faultless, the optional squared-off steering wheel (lifted from the One-77) is inelegant but functional, and the silver dials spidery and discrete. Well, as discrete as a speedo that goes up to (a rather fanciful) 240mph can be. Good job there’s a digital read-out or else you would never know how fast you were going within legal limits. The rear seats could barely accommodate the smallest of children. They could accommodate a brace of canopic jars, though, should you wish to be buried with your pride and joy.

There is no champagne cooler, my co-driver was disappointed to find, but I did discover the gap between the passenger seat and the sill is the perfect shape to snugly fit a standard-size bottle of fizz. The Vanquish’s key reminds me of the “Solex Agitator”, a solar energy device Roger Moore is tasked with hunting down in The Man With The Golden Gun. At one end is a glass top with the “scarab wing” logo inside. You push the fob all the way into the dashboard, the glass logo pulses red and all hell breaks loose. Just like the Solex Agitator, you see.

This car comes with one of the company’s longestserving personalised plates: 1 AML. It stands for Aston Martin Lagonda and, when stopping in Exeter for fuel, a man of around 50 got very excited, claiming he had seen that very same plate in a car magazine in 1980. It was probably cut out and stuck on his teenage bedroom wall. How on earth had I got hold of it, he wondered. In Padstow there’s a john dory with my name on it, so I gun the Vanquish towards Cornwall.

Read more: Best of travel: From Canada to Mexico to find Trump’s legacy

This is an incredibly usable supercar, with perfectly weighted steering and sublime ride. Its 565bhp ensures traffic is nothing more than a mobile chicane, while the carbonceramic brakes ensure that when you punch the stop pedal you actually go back in time. My final night’s lodgings at the Jamaica Inn are said to be one of the most haunted places in the country. It was the hideaway for a large portion of the rum that entered the country illegally in the early 19th century, hence the exotic name.

The Aston fits in just fine in this haven for English rogues, mavericks and risk-takers. Perhaps its most common stomping ground, though, is South Kensington and it’s there that I return from my West Country mission. Approaching a handsome dark grey Ferrari F12 at a set of traffic lights on the Brompton Road, I recognise the personalized plate. Sure enough, it’s Hugh Grant at the wheel. There’s a mutual nod of acknowledgement and a nervous, lopsided smile, as if to say: Are we really going to be so immature as to lay down rubber? I think the better of it. I’ve driven the F12 and I remember the way it throws your head back under acceleration like no other road car.

Despite being a direct rival to the Vanquish – both front-engined V12s – the Italian trumps it by 165bhp. The Aston is quick, no doubt about that, but it doesn’t feel supercar quick. I’ll let Hugh have this one. But, of all the cars I’ve driven, the Vanquish was the hardest to give back. It’s the only £200,000 car I can imagine living with.

Unlike other supercars, it elicits a hushed admiration everywhere it drives. How much abuse does Hugh Grant have to put up with for that extra 165bhp, I wonder.