Owlet and the appeal of wearable tech for babies 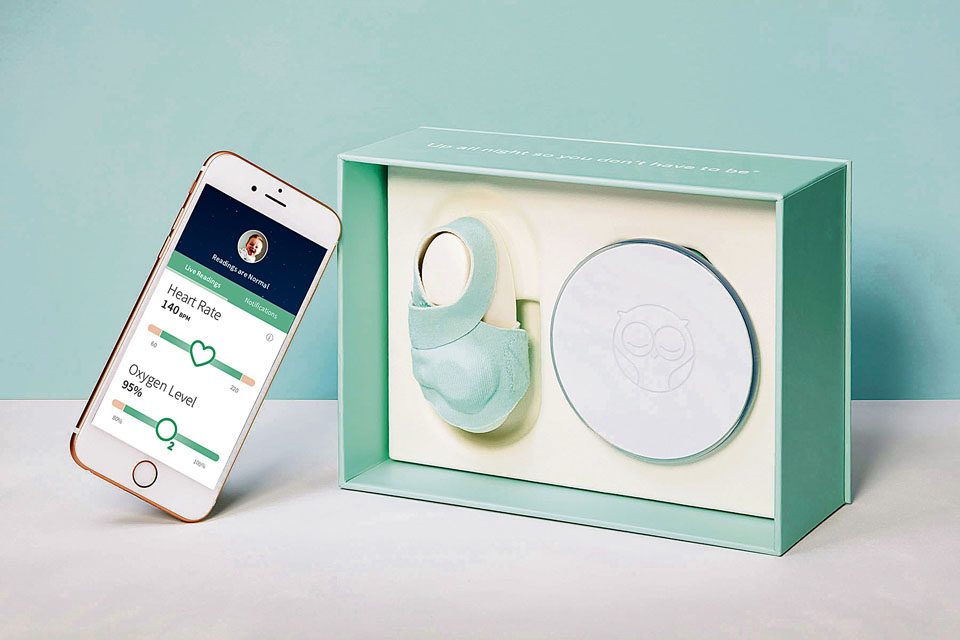 Wellbeing is a big business. Technology can now closely track our personal health, with apps and devices to monitor how many steps we take, what calories we’ve eaten, our blood pressure, and even how well we sleep.

Fitbits and other wearable gadgets have also exploded in popularity with health-conscious consumers.

Is there a limit to this trend? Well, as an indicator that there is not, you can now buy wearable tech for babies.

The Owlet “smart sock” is a piece of fabric with a sensor that wraps around a baby’s foot. The wireless monitor tracks the baby’s heart rate, oxygen level and sleep, and this data can be streamed live to parents via an app. It can then alert them if these readings become abnormal, prompting them to check on their child.

A cynic might think that such a product is designed to profit off the paranoia of new parents, but it’s worth mentioning that Owlet is run by four fathers who are well aware of the stress of parenting. Designed for infants up to 18 months old, the ethos of the company is to provide customers with peace of mind.

“Having a baby should be and can be the happiest time of their life, but it’s also the most stressful,” says Jake Colvin, father of three and co-founder and vice president of international operations at the US firm, which launched in the UK at the start of 2019.

“You get home from the hospital and you don’t know what to do with it. Overnight you become a sleep clinician, a doctor, a nurse, a nutritionist, and that’s a lot to take on. So we thought, ‘okay, are there any tools we can give parents to make that journey a little easier?’”

The birth of Owlet

Owlet was founded in 2013 by Kurt Workman, Zack Bomsta, Jordan Monroe, and Colvin. The four met while on a fellowship programme at Brigham Young University in Utah about starting a business and designing products. Colvin explains how Workman – now the company’s chief executive – came up with the original idea.

“It started as a wireless version of a pulse oximetry for a hospital – that thing you clip onto your finger which measures your blood’s oxygen level. Kurt had been working with a friend who was a nursing student, and they absolutely loved the idea,” he recalls.

Around that time, Workman’s relative tragically lost a baby to Sudden Infant Death Syndrome, and he and his wife worried about the health of their future children.

“He thought, why is there nothing for moms like that hospital monitor? Why can’t we have something for that? So we all got back together in the fall and he said, ‘I’ve got this technology I’ve been playing around with, wireless pulse oximetry, and am thinking about what if we used it in the home, specifically for infants’.”

Four men and a baby monitor

They spent the rest of the programme developing the idea into a  product and a business.

“It was a very messy, iterative process,” admits Colvin. “We’d gone through 400 versions of our product – and that’s just on the electronic side. Then you’ve got the mobile side, and the app, and the software, and then the actual fabric socks.”

The company shipped its first unit in 2015, and two years later expanded to Canada and Australia. Colvin recalls how keen parents around the world were to get hold of the product.

“At the very first trade show we did in Australia, I had a mom come up to me who said ‘I bought your original version years ago, I’ve got another child and I’d like to upgrade my sock’, so we gave her a new unit. She said she’d paid $500 to get the original one, more than double what it cost in the US, just to get it down to Australia herself and import it,” he says.

“If you’ve found a problem where people are willing to go to that extent to solve it, then that’s fantastic for a business – that’s huge.”

The bank of mum and dad

If you’re a parent reading this and think it might be useful for your own child, note that it’s not cheap – the smart sock currently retails for around £269. That one-off cost, however, does cover the analysis of the data and storage in cloud-based servers forever (well, until the baby grows out of the sock), and Colvin explains that the price has come down significantly from inception.

“The nice thing is that the cost of technology is constantly coming down. Our first units were thousands of dollars to make each, and now it’s coming down to where we can make it an affordable product that meets the market.”

But it’s not been plain sailing. Owlet faced a backlash from the medical community when it first started.

“Half of doctors would say ‘we don’t want to hear anything about it, you’re just going to create more panic, drive people to emergency rooms and cause more anxiety’. On the other hand, you’d have other doctors and nurses saying ‘this is absolutely brilliant, we need something like this’,” he recalls.

“But if you have experts saying ‘you can’t do it’, that can make it hard to get funding and to get people to believe you.”

Owlet did listen to these concerns, and made sure to design the customer experience to avoid causing undue stress. It also commissioned research into the sock’s impact on parents.

“96 per cent reported less anxiety, 94 per cent report a lot better sleep, and that was tested on over 50,000 parents through third-party research published in medical journals in the US,” Colvin says. “We’ve had over 400,000 people use our sock now, and it’s a very positive experience.”

It’s important to note that the monitor is not a medical device: it’s not telling parents when to take their child to the doctor, it is only reporting data.

“That’s the parent’s call: we’re not diagnosing for them,” Colvin reiterates. “We’re giving them information that they wouldn’t otherwise have, and letting them make a decision for how they care for their child the best, which is no different than any other type of technology in our lives.”

Pushback from doctors isn’t the only trouble the company has faced. Just this month, it was reported that the National Advertising Division in the US (the equivalent of our Advertising Standards Authority) was concerned that parents might misinterpret Owlet’s marketing and think that the monitor could prevent illness. It advised the business to make its disclosures – that the monitor only gathers information – clearer.

There may even be the risk of legal issues if parents act (or don’t act) based on information from the device.

But despite such setbacks, Colvin and his colleagues have made a success of the business, which generated revenue of $25m in 2017 and is now worth more than $100m. Owlet is also working on other products, including a pregnancy band for mothers-to-be to measure fetal heart rate.

Some may mock the extremes of the personal data tracking trend, but in this case Owlet does seem to have tapped into a massive consumer demand, and is catering to a market that is above all seeking peace of mind about their kids.