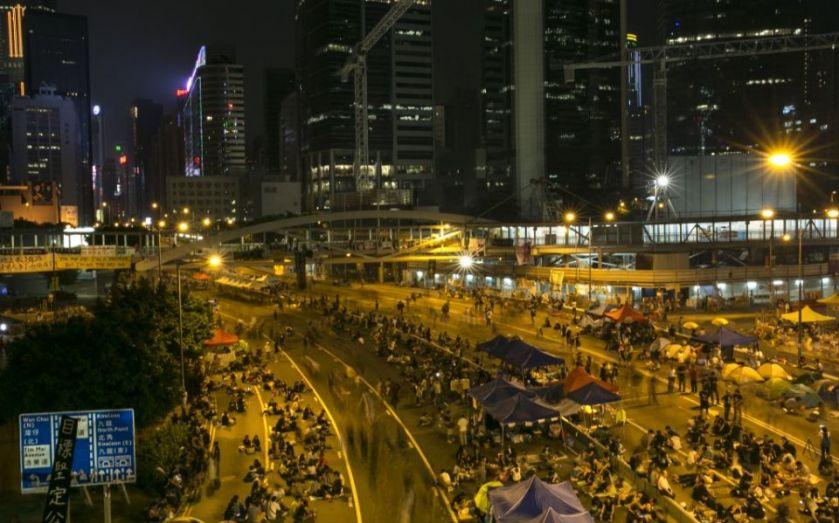 “We claim nothing but the liberty and privileges of Englishmen… we can not be deprived of them without our consent.” – George Mason, a founder of the American republic, 1776
“There is no room to make concessions on important principles.” – The People’s Daily, the official paper of the Chinese Communist Party, 3 October 2014
There is an unintentionally revealing picture that gives the game away as to the likely unhappy outcome of the protests in Hong Kong, after the Beijing-backed authorities issued an ultimatum that order must be restored in the territory. Protesters, dressed in the casual student garb that amounts to a worldwide uniform, are armed for battle with the riot police, carrying only umbrellas and goggles for the likely tear gas to come. They obediently sit around a city square – neatly in a row – without it ever entering their heads to walk on the grass, as a sign politely requests them not to.
Nor is this the only example of these would-be revolutionaries behaving as grandparents would like. They have not only picked up the garbage following their rallies; they have correctly sorted it. The protesters have politely handed out umbrellas (the unofficial symbol of the protests) to all who have come, but only if people wait their turn in the queue. For anyone who has ever been there, these are not the cultural habits of the Chinese. No, these are the actions of cultural Anglo-Saxons.
And that is precisely the problem. The Hong Kong protesters – whether they know it or not – see this conflict through an Anglo-Saxon lens, entirely removed from how Chinese President Xi Jinping and his fellow members of the Standing Committee of the Communist party view it. The Hong Kong protests are the expression of an irreconcilable conflict, between protesters trying to preserve their Anglo-Saxon rights of free expression, a free judiciary, and free assembly (rights culturally and painfully acquired during the specific process of 150 years of British rule), and a Chinese Communist party forthrightly committed to limiting these (from their point of view) dangerous aberrations.
This points out the fundamental tension in the “One Country, Two Systems” mantra that served as the basis for the deal that saw Hong Kong revert to Chinese rule in 1997. The problem with this formulation is that it is really “One Country, Two Cultures” that we are talking about.
From their different cultural perspectives, it is easy to see why both sides feel so aggrieved. As unpopular Hong Kong Chief Executive Leung Chun-ying and his masters rightly argue, universal suffrage in the election for Chief Executive of the territory in 2017 (promised in 1997) is an unheard-of concession by the centre for a region that has never experienced democracy. In their eyes, not only is China living up to its word, it is bestowing upon Hong Kong an almost unimaginable degree of autonomy.
To put it mildly, that is not how the protesters see it. Rather, they strongly feel their promised rights are eroding before their very eyes. Having already beaten back Beijing’s efforts to control Hong Kong textbooks, and seen off a draconian internal security directive, they feel the meagre democratic concessions on offer are merely another effort to chip away at their promised rights.
Sounding as indignant as Thomas Jefferson, the 17-year-old student leader Joshua Wong makes it clear what he and his allies want: Leung to go; the people and not just a committee of Communist party allies to be allowed to nominate candidates for Chief Executive. In other words, real democracy, not managed democracy.
The trouble is that Xi is culturally conditioned as well, as his touchstones are at best Deng Xiaoping and at worst Mao. He has managed to accumulate more power for himself than any previous Chinese leader in a generation. Further, he seems to understand the gloomy iron law of revolutions: if you temporise with demonstrators (as Louis XVI of France and Nicholas II of Russia did), you are toppled; if you shoot to kill (as Nicholas I and Deng Xiaoping did), you die in your bed.
The best outcome here is cosmetic change (perhaps Leung will go or the party may be amenable to broadening the nominating committee just a tad); beyond that, there’s only force. Xi must save face, from his point of view, first to secure his own position but also to reinforce the image of a strong China that is central to the party’s continuing “Mandate of Heaven”, to its legitimacy. Tragically, George Mason will not be allowed to get in the way of this.
Dr John C Hulsman is senior columnist at City A.M. and a life member of the Council on Foreign Relations. He is president and co-founder of John C Hulsman Enterprises (www.john-hulsman.com), a global political risk consultancy, and available for corporate speaking and private briefings at www.chartwellspeakers.com. Eva Hulsman-Knoll is director of Asian analysis at John C Hulsman Enterprises, and is an expert on the study of China’s foreign policy.