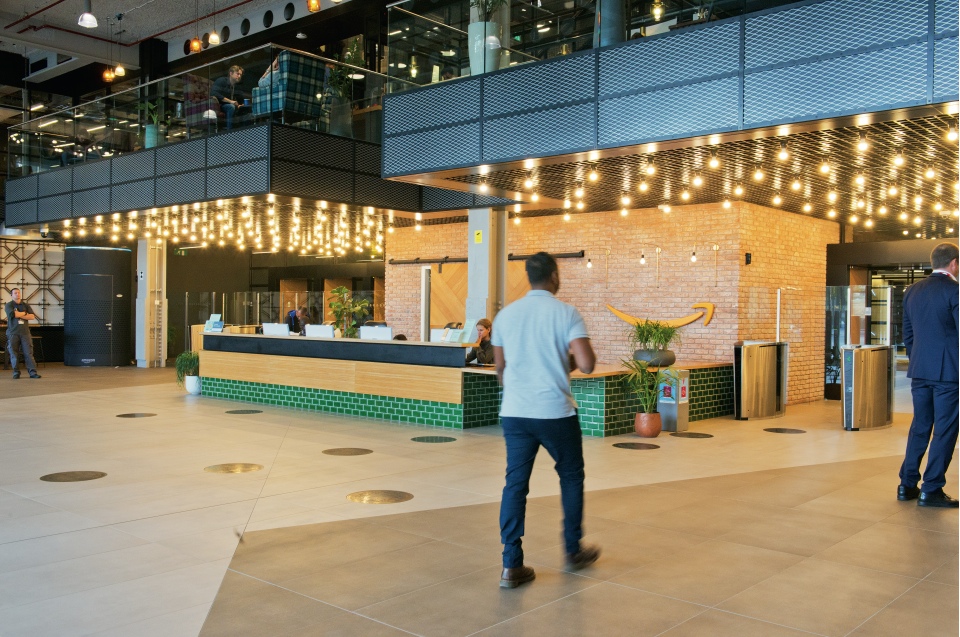 There’s always money in the banana stand. Or at least there would be, were the bananas not being handed out for free. Each morning outside Amazon’s HQ in Shoreditch a fruitmonger dispenses complimentary bananas to Amazon staff, peckish commuters and anybody who cares to take one.

The tradition was started by Jeff Bezos himself on the company’s sprawling Seattle campus, a vast complex of more than 45 buildings across the city, covering between 8.1m and 13.6m sqft, depending on who you ask. That’s the equivalent of ten Shards.

The tech giant’s London operation is relatively modest by comparison, though still one of the largest footprints of any tech company in the capital. Situated over all 15 storeys of the recently completed Principal Place on the edge of Shoreditch, Amazon’s headquarters occupies 600,000 sqft of floor space, and joins an existing office in Farringdon in employing a total of around 5,000 staff. Amazon had planned to take two thirds of the building, before deciding to take the whole lot in 2017. An indicator, if one were needed, of the firm’s ambitions for accelerating growth in the UK.

The vast, atrium-style lobby is bustling when we arrive, with employees streaming in through the revolving doors of the glass-fronted entrance, and onwards through a wall of airport-style security gates. The ceiling is a starry expanse of hundreds of warm Edison bulbs, the waiting area is furnished in mismatched mid-century chairs and coffee tables, and on the floor are a series of round tiles commemorating different parts of the business. An Amazon Echo speaker the size of a phone booth stands in one corner of the reception area. You can get inside it and chat with Alexa, or just take a call in its soundproofed confines.

Past the security gates is one of several event spaces, designed to be easily adapted to meet the wildly varying needs of a business that’s spread across industries as diverse as fashion, music, web services and grocery shopping. Pinning down exactly what Amazon does here is tricky, because it does a little bit of everything, and the result is an office layout that is consciously more generic and function-led than most smaller, more focused companies.

“We’re a global business,” says Ben Farmer, head of HR for Amazon UK. “We’re incredibly diverse. We really think that being able to collaborate in real-time is important for both our business and for how people learn and develop here. So we didn’t want to have too much formality and structure around our spaces. We’ve got meeting rooms, as you’d expect, but there’s lots of other spaces that people can use either as individuals or as teams.”

Riding the elevator up to the 15th floor reveals one such space, a bright and airy lounge with wide views out over east London. “This is set up fairly informally today,” says Farmer, “but, for example, we had Dido performing here on International Women’s Day, and we had a completely different setup then. It’s actually quite cool coming up here because on any given day you’ve got no real idea how it’s going to be set up or what’s going to be going on.”

A curved brown wall disguises a mini auditorium in the corner of the lounge, where a new hire orientation is in full swing. As we descend through the building, it’s possible to peer down the full height of the structure through an impressive interior atrium that rises from the café on the first floor to a huge skylight above. Ensuring plenty of natural light was a specific consideration when designing the office in London, where daylight can be a rare commodity, says Farmer. The vantage point is one of the few times you get a true sense of the building’s population, too.

There are all the usual trappings of a large, 21st century technology company. Every desk can be adjusted to a standing position at the push of a button, there are gender neutral toilets and multi-faith prayer rooms, nursing rooms for breastfeeding mothers and meditation spaces for relaxing.

On the 10th floor is a fully equipped fitness studio with a busy schedule of classes. Next to that, the recruitment team has its own set of dedicated meeting rooms for interviewing candidates. There is no post room as such, instead dotted about the place are bright yellow Amazon lockers for taking in parcel deliveries to employees.

There are two rooftop terrace gardens, which aren’t terribly pleasant places to be in December, but find regular use in warmer weather for company gatherings. Could they also one day function as landing pads for Amazon drone deliveries?

“That’s not happening here,” say Farmer, “but we do have a research and development facility in Cambridge, where the first ever drone flight to a customer took place. We’re proud to say that’s come out of the UK.

“Beyond that we’ve got a fair number of our technology teams here. The Prime Video team is here, and there’s a big technology team based in this building.”

We wander through the Amazon Fashion department, past racks of clothes from the company’s latest fashion line and towards the Prime Video floor. There are shelves packed with different cables, televisions, mobile phones and games consoles – every feasible combination of devices is routinely tested to ensure Amazon’s video app is working smoothly across all platforms.

Last year Amazon bought the rights to broadcast Premier League matches starting in December, and the company will no doubt be pulling out all the stops to ensure their streaming software works flawlessly on even the most obscure hardware.

Rounding another corner, we find a few more nods to Prime Video’s eminence in the building. Walls are adorned with movie posters for Amazon Originals such as The Man In The High Castle and The Marvelous Mrs Maisel. A life-sized stuffed buffalo, a prop from American Gods, dominates one room. Most eye catching however is a bright red Mini Cooper converted into a set of plush leather chairs. It’s a nod to the Italian Job, and the origins of Prime Video itself.

“This is a nod back to one of our subsidiaries,” says Farmer. “LoveFilm was a business that we acquired a while ago, and, along with others parts of our business, became what Prime Video is today. These seats actually belonged to the original LoveFilm offices.”

Back on the second floor, the piazza style lunch area is beginning to fill up as hungry employees descend from the dozen floors above. Stalls sell pizza by the slice, a laid back coffee shop with low-slung lights and comfortable seating overlooks the reception area. Like almost everywhere else, the space is designed to be versatile, and regularly used for networking events: here and there are dart boards, table tennis and pool tables.

Amazon’s HQ has the population of a small town, and a cursory tour of its floors can only yield a snapshot of the breadth of its UK operation. But if anything is clear, it’s that the office space is intended to be as adaptable as Amazon itself.

“What works for us here is not being too prescriptive about the spaces we’ve got,” says Farmer, “but providing a real variety that people can use as they see fit. We employ lots of very smart and inventive people, and they use space in ways that work for them.”