Barack Obama's State of the Union address: "The shadow of crisis has passed" 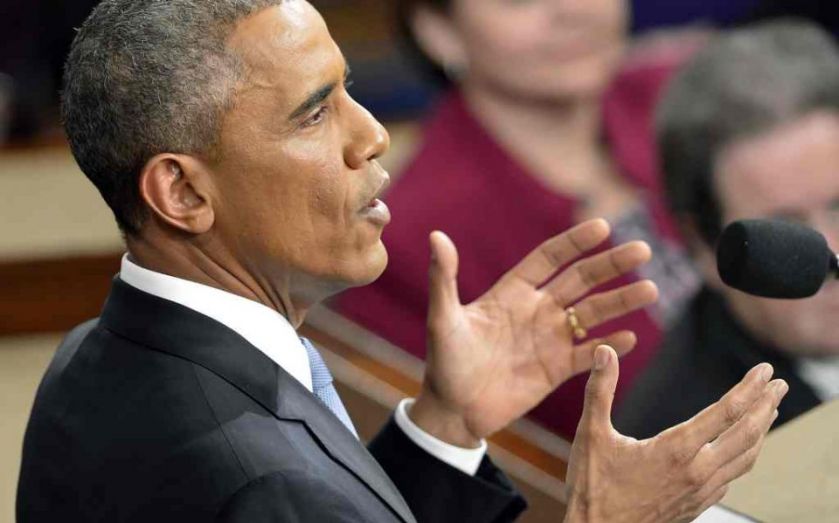 It was a triumphant moment for Barack Obama last night, when he stood up to tell his country "the shadow of crisis has passed".

His closely-watched State of the Union address followed months of strong growth in the US economy – in stark contrast to its neighbours across the Atlantic.

In a speech firmly designed to appeal to the middle classes, he told a crowded House of Representatives now is the time to cut taxes to those who need it most in order to give workers "a fair shot", even if such a move hurts the rich. "Middle class economics works," he added.

How will he spend his final two years in office? Obama said he was keen to "commit ourselves to an economy that generates rising incomes and chances for everyone to make an effort".

With a growing economy, shrinking deficits, bustling industry and booming energy production – we have risen from recession freer to write our own future than any other nation on Earth.

Plans included $235bn (£155bn) in new spending, to be focused on women, in the form of childcare tax credits, and a new tax credit for families with two working parents, plus paid maternity and paternity leave. He also proposed free community college, and earlier this month announced plans to cut annual mortgage insurance premiums, making it easier to buy a house.

He also reinforced his plans to raise the minimum wage.

To everyone in Congress who still refuses to raise the minimum wage, I say this. If you truly believe you could work full-time and support a family on less than $15,000 a year, go try it out. If not, vote to give millions of the hardest-working people in America a raise.

But Republicans remained sceptical about his ability to fund the new programmes, which he said would be covered by an increase in the top rate of capital gains tax, as well as taxes on inheritance.

"Rather than outlining pro-growth policies that would provide more opportunity for hard-working families and job creators that have been left behind in the Obama economy, the President slipped back into the role of Campaigner-in-Chief," he said.

Finding common ground is what the American people sent us here to do, but you wouldn’t know it from the president’s speech tonight. While veto threats and unserious proposals may make for good political theater, they will not distract this new American Congress from our focus on the people’s priorities.

@BarackObama #SOTU pointed way to an economy that works for all. Now we need to step up & deliver for the middle class. #FairShot #FairShare