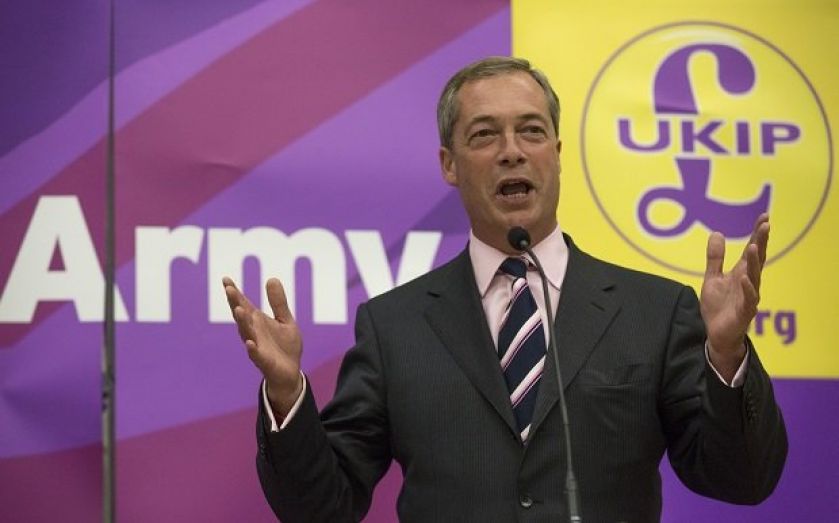 Nigel Farage has delivered his last conference speech before the 2015 general election.

Speaking to Ukip delegates, he celebrated the party's success in the European elections and congratulated Douglas Carswell for abandoning the Conservative party for Ukip.

He praised Carswell's defection as the bravest act he had seen in British politics. In keeping with the spirit of the conference, he said Ukip was making inroads into the Labour heartlands of the northern England.

Farage told a packed audience that the choice of Doncaster for the party's conference was to challenge Ed Miliband and parking "Ukip's tanks on the Labour party's lawn".

Emphasising Ukip's cross-party appeal, he told the audience that Ukip was not about left or right but about "right and wrong".

Farage elicited widespread laughter from the conference hall by taking a swipe at Miliband's failure to remember the deficit during his conference speech..

Ukip's leader took the opportunity to position his party as the natural party of the opposition to Labour in the north. Farage added that Ukip posed a threat to the entire British political class.

Speaking of the debate between himself and Nick Clegg on Britain's EU membership, he said it was the biggest boost that had been given to him and his party. He proceeded to ask the conference hall to applaud Nick Clegg for all the help he given to Ukip, a request the attendees were delighted to grant.

Here are some of the key points from Farage's speech:

Farage said Labour's "one party state" in the north had failed to tackle child abuse thanks to political correctness. Farage said Rotherham authorities had become so fearful of being branded racist that they failed to deal with the "evil" in their own town.

The Ukip leader said the party would not tax people on the minimum age, raising the personal tax allowance to £13,500. Furthermore, Ukip has promised to cut income tax for those earning up to £55,000 from 40p to 35p.

Farage said it was time for the UK to take control of its borders and cut down on the numbers of people coming into the country. Earlier in the day, Ukip's spokesman on migration and financial affairs Steven Woolfe told the party's conference in Doncaster that net migration would be limited to 50,000 a year under an Australian-style points based system.

As was expected, Farage reiterated Ukip's pledge to leave the EU. However, Farage also criticised the government's military intervention in Libya and called UK foreign policy an "utter shambles". He added that it would be a grave mistake to think bombing the Islamic State would solve the problem of Islamic extremism.

Turning to the result of the Scottish independence referendum, Farage said Ukip supported the United Kingdom but insisted that only English MPs should be allowed to vote on English laws.

Farage said the party would support postal voting for the elderly and the infirm as well as the armed forces but that others should vote at a polling station.