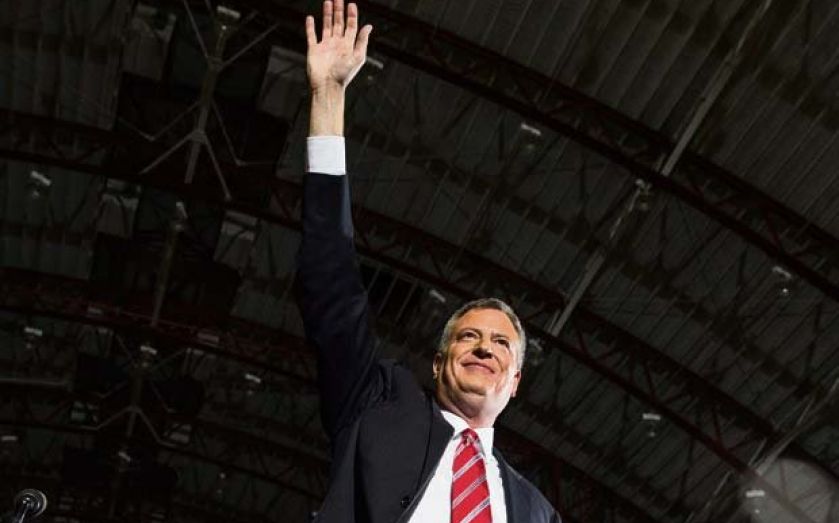 De Blasio – the first Democrat to be elected as mayor in two decades – grabbed 73.3 per cent of Tuesday night’s vote after a lengthy campaign in which he pledged to address economic inequality in New York, dubbing it “a tale of two cities”. He will take office on 1 January, following Michael Bloomberg’s 12-year term in City Hall.

During his campaign, the 52-year-old repeatedly criticised the increasing gap between the city’s wealthy and poor residents, raising fears among the corporate community – particularly real estate developers – that de Blasio would make New York a less attractive place to do business.

Though de Blasio slammed the proliferation of “luxury condos” more than once in his speeches, he also backed development, saying: “If we aren’t doing everything possible to spur on development … we risk nothing getting built at all, and that is the worst possible outcome.”

One of his key policies is a plan to raise the city’s top income tax rate for those earning over $500,000 by 0.6 percentage points to fund more kindergarten education – raising an estimated $530m a year.

PROFILE: NEW YORK’S NEW MAYOR-ELECT
BOSTON-raised de Blasio launched his mayoral campaign back in January from the steps of his Brooklyn home, a modest family house a world away from the 18th century grandeur of Gracie House – the upper east side residence of the New York City mayor. Born Warren Wilhelm Jr in Manhattan in 1961, the mayor-elect reverted to his mother’s maiden name after his parents divorced when he was eight, though he didn’t make the legal switch until 2002. After returning to study at New York University and then Columbia University, where he graduated as a master of international affairs. De Blasio first dipped his toes in City politics during David Dinkins’ 1989 campaign – working as a volunteer coordinator for the city’s last Democrat mayor.  After working on Hillary Clinton’s first run for the senate in 2000, de Blasio then spent eight years on the City Council until he was sworn in as Public Advocate in 2010. Since announcing that he would run for mayor at the start of the year, de Blasio’s family – wife Chirlane McCray and children Dante and Chiara – have taken centre stage in his campaign. A video starring his 15-year old son Dante backing de Blasio’s plan to end the controversial police tactic of “stop and frisk” has had almost 300,000 YouTube hits, and led to his campaign slogan being changed to Go With The Fro after his son’s afro hairstyle. Dubbed Che de Blasio by the New York Post, one of the Boston Red Sox fan’s first tasks in office will be to prep a preliminary budget for the 2015 fiscal year, due at the start of February. “Let me be clear, our work, all of our work, is really just beginning,” he said yesterday.