Nestled deep within the Ecuadorian cloud forest, Mashpi Lodge is a hotel at one with the nature surrounding it 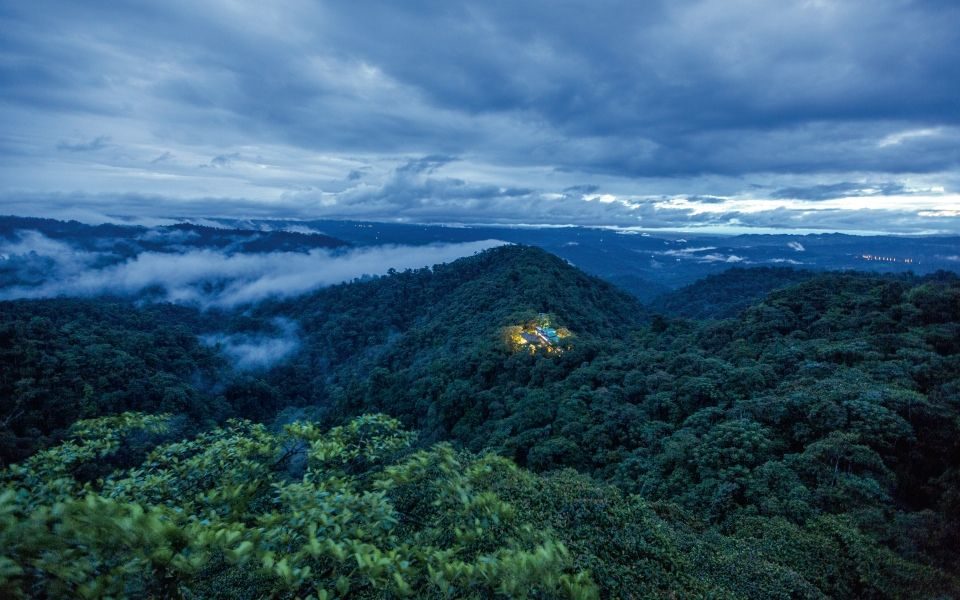 Shortly after the turn of the century the former mayor of Quito, Roque Sevilla, bought up a vast chunk of the Ecuadorian cloud forest from a local logging company, and turned the land into one of the largest privately owned conservation areas in the country.

Somewhere in the centre of it all, on the site of a defunct sawmill, he built Mashpi Lodge, a $10 million box in the dense jungle that’s part futuristic research station and part 24-room boutique hotel.

Opened in 2012, the lodge now attracts naturalists and conservationists from around the world, contributing to and leading scientific missions and academic studies. The work done there has led to the discovery of new species in the region, and helped the local community by hiring and educating those from the nearby village that gives the lodge its name. Many of the staff are ex-loggers.

Getting there is a mission. I descended from the nausea-inducing altitudes of the capital, where I’d spent a few days acclimating, whiling away the time by exploring local shops, churches and museums. At Casa Gangotena hotel, a sign by the staircase warns visitors to watch their breath as well as their step.

Bounding up a single flight of stairs on your first day in Quito (at 2,850 metres above sea level, it’s the second highest capital city in the world) feels like sprinting a hundred metres in a gas mask – the thin air never quite fills your lungs. My taxi driver advised me to avoid booze until at least my third day, and the hangover that kicked in part way through my second bottle of beer in the hotel bar was testament to his unheeded advice.

So it was with physical relief that I dropped a clear 2,000 metres on the way to Mashpi. Crossing the equator, the atmosphere was beginning to feel more nourishing, and by the time I reached the cloud forest the wet air was as thick as custard. To protect the forest and avoid felling trees, Sevilla refused to widen the two-and-a-half-mile-long mud path that joins the main road to the lodge, so we waited for a moment at the towering, Jurassic Park style entrance gate while my driver radioed ahead to ensure there was no oncoming traffic.

Rooms at Mashpi are dominated by windows that look out onto the lush canopy, where primordial-looking bugs and iridescent hummingbirds buzz just outside from the glass

With the road confirmed clear we tumbled and bounced along the path, which undulated and looped back on itself, crossed small rivers and clung to the sides of steep hills. It’s almost like Mashpi Lodge doesn’t want guests.

And then it appears through an opening in the trees, a steel-stone-and-glass construction reflecting the tangled forest in which it sits like a futuristic shoebox, its floor-to-ceiling windows camouflaging its true shape. It looks almost absurd, this man-made object plonked in the middle of nature, and if you were to wander just 100 metres away in the wrong direction it would vanish back into the dense vegetation like a mirage, the fleeting hallucination of some delirious survivalist. Fresh juice, cold hand towels and a warm welcome from the lodge’s chief expedition leader assure you that you haven’t, in fact, gone mad on jungle mushrooms and are face down in a tropical ditch somewhere.

Rooms at Mashpi are dominated by windows that look out onto the lush canopy, where primordial-looking bugs and iridescent hummingbirds buzz just outside from the glass, but there’s hardly time to hang around once you’ve unpacked. Days are structured around evening briefings, long hikes into the forest, scientific lectures on the local flora and fauna, and visits to areas of specific interest linked together by a handful of trails that criss-cross the landscape.

You stop just long enough each day to eat lunch and dinner in the atrium-style restaurant, the two outer windows of which overlook the rolling hills and valleys of the Andes and become carpeted in large moths once the sun goes down and the warm glow of the lodge’s eco-friendly LED lights begin to attract nocturnal critters.

Small group expeditions are led by guides with a seemingly supernatural sense of the world around them, who’ll stop mid-sentence to ask if you can spot any animals nearby, before pointing out the previously invisible iguana chilling out by your shin. At dawn each day, determined to see as much as I could despite the jetlag, I’d blearily make my way to the lodge’s upper terrace for some early morning bird watching and strong coffee. Armed with a monocular, the lodge’s resident naturalist would identify the forest’s various endemic species as they appeared – sparrows, tanagers, quetzals and toucans – and then point them out in a well-thumbed bird book. Birds, it turns out, come in a few more colours than just black, brown and that greasy mix of green and purple you get on pigeons’ necks.

The rest of the day I hike for hours with an expert guide, wading upriver to take a plunge in a remote waterfall pool, or pedaling a tandem zipline bike through the canopy hundreds of meters above the ground, or trekking along narrow paths through the trees after dark to spot tarantulas and glass frogs, so called for their transparent skin, through which you can see their organs. It gets, as you might guess, very dark in the forest – switch off your torch and the inky blackness is almost suffocating – but wait a few moments for your eyes to adjust and the forest floor reveals itself to be smattered in a bioluminescent fungus, with odd logs and rocks that glow a faint blue. It’s a little hackneyed to describe the scene as magical, but it’s some real Harry Potter stuff, and the kind of thing that would have gone unnoticed had we not been instructed by our own personal David Attenborough.

To the west of the lodge there’s the Life Centre, a butterfly tent housing many examples of the 300-odd identified species of moth and butterfly that are found in the reserve, and where you can observe the process of metamorphosis from egg to adult. Most remarkable among the residents here is the owl eye butterfly, whose tricked-out wing pattern is a convincing enough replica of an owl’s face to momentarily startle would-be predators.

On the opposite side of the lodge is the hummingbird house, where hundreds of the thumb-sized birds congregate and do battle around half a dozen sugar-water feeders. Their buzzing wings flap hundreds of times per second, and burn through so many calories that they need to gorge themselves constantly, using their specialised beaks to sip nectar from long-stemmed flowers. That said, they still find time to fight one another over mates and territory, dive bombing and swooping their foes like little feathery biplanes.

My guide, an ornithologist, reeled off hummingbird trivia that I’ll be recounting in pubs for years to come. They don’t sleep. Instead they enter a coma-like state each night called torpor, in which their metabolism slows way down and their body temperature drops. They’ll often hang upside-down while in this state, and it can take them up to an hour to fully wake up again.

When Roque Sevilla began the two-year construction of Mashpi Lodge, his priority was for the project to be low-impact, and to avoid disturbing the local wildlife. To that end the noisiest work was carried out off-site, and entire sections of the lodge would be delivered along that tiny, unpaved track he refused to widen.

His efforts worked. Now 19 of the 32 species of hummingbird found in the cloud forest still regularly visit Mashpi Lodge, and the extreme bio-diversity of this part of the world is content to live alongside the lodge, just inches from its windows.

A trip to Ecuador costs from £3,695 per person with Rainbow Tours, based on four nights in a Plaza View Room at Casa Gangotena in Quito on a bed and breakfast basis, three nights in a Wayra room at Mashpi Lodge on a full board basis (also including activities) and including international flights (via Bogota) and transfers. To book with Rainbow Tours call 020 7666 1266 or visit rainbowtours.co.uk