Mortgage approvals soared to a six-month high in February, data released by the Bank of England today shows.

Threadneedle Street said mortgage approvals rose to 61,760 in February, which was up from 60,707 in January.
This marks the third consecutive month of growth since approvals hit a 17-month low of 58,944 in November.

Despite the gains mortgage approvals still remain below January 2014's 74-month high of 75,453.

"There is mounting evidence that housing market activity is edging up from its recent lows," Howard Archer, chief UK and European economist at IHS, said.

"This underpins our belief that house prices will rise by around five per cent in 2015."

The burst comes after average house prices fell 0.2 per cent in January the Office for National Statistics said. This was in line with other surveys from Nationwide and Halifax showing the housing market has cooled. 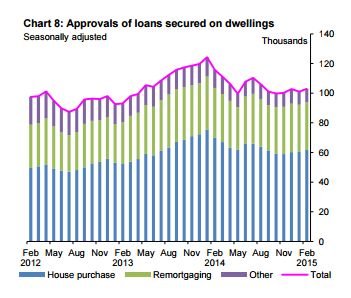