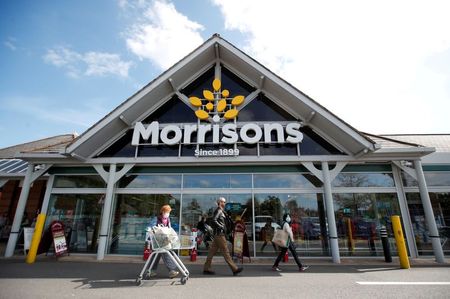 Morrisons, the fourth biggest UK supermarket, will cut sick pay for unvaccinated employees who need to self-isolate in a bid to limit the “biblical costs” of the pandemic, according to reports.

The news comes as the supermarket readies itself to be auctioned off next month and after it reported a slide in interim profit before tax, of 43.4 per cent from £145m to £82m, yesterday.

The high street staple also reported lost earnings of £80m from its cafes, fuel and food-to-go as a result of the pandemic.

Morrisons said the changes to pay for unvaccinated workers would also help mitigate supply chain issues, according to the Guardian, who first reported the news.

Shortages of HGV drivers and the rising prices of commodities, such as beef and bread, have also contributed to what chief executive David Potts described as, the “biblical costs of managing Covid,” in an interview with the Guardian.

The supermarket warned that it expects industry-wide retail price inflation in the coming months as a result of the HGV driver shortage, global commodity price increases and higher haulage costs.

In addition to helping reduce costs for the company, Potts said the new policy was partly aimed at encouraging employees to get Covid-19 jabs.

“Seventy-one per cent of folk already have [had the vaccine],” he reportedly said, “and we are all in this together.”

The reduction to sick pay will, according to reports, not apply to staff who have had the opportunity to receive two does of the vaccine, or to employees who have symptoms of the virus.

“From 1st October, following Government confirmation that all adults have had the opportunity to get double vaccinated, we will no longer be paying full sick pay for pinged colleagues who have chosen not to be vaccinated,” a Morrisons confirmed with City A.M.

Morrisons has been at the centre of a bidding war over the past two months, which has seen private equity firms Fortress and Clayton, Dubilier & Rice, race to one up each other’s offers.

With both bids not yet declared final, the bidding battle has gone to auction.