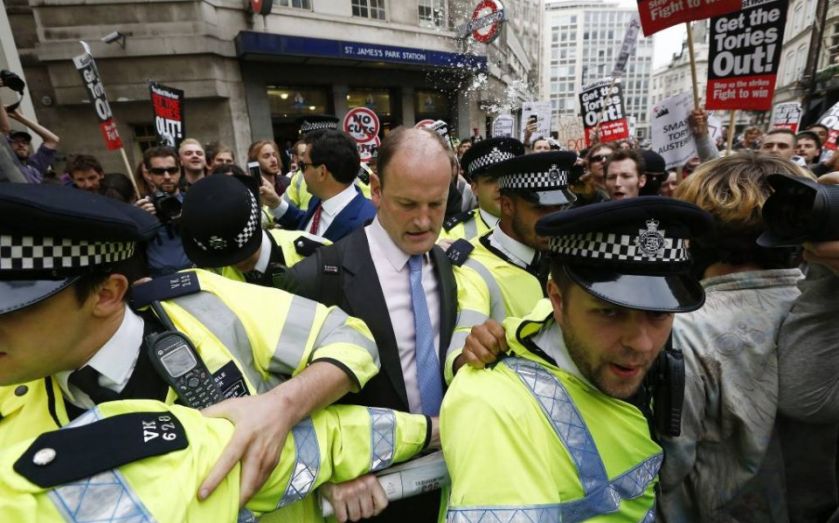 Police have released the images of three men in connection with the verbal attack on Ukip MP Douglas Carswell last week.
Carswell was caught up during the anti-austerity protests that took place around Whitehall and St James' Park following the Queen's Speech last Wednesday.

Demonstrators chanted “Ukip racist” and “don't come this way fascist”. Police had to push their way through the crowd to get the sole Ukip MP to safety. He later described it as being stuck in a “lynch mob”, adding it was “very, very nasty”.
https://twitter.com/DouglasCarswell/status/603616815017795585
https://twitter.com/DouglasCarswell/status/603617436160647168
Police are calling for the public's help to identify the three men who they “wish to speak to”. Any information provided will be treated in strictest confidence, they said.
The statement, which does not name Carswell, but identifies him as a 44-year-old man, continues:

The man had left the station and was making his way to a nearby bus stop when protesters who had attended and earlier demonstration began to threaten and intimidate him.

He was trapped by the group and was prevented from retuning to the tube station or getting to the bus stop.
Police arrived to provide assistance to ensure that the man could safely move away from the protestors. He was escorted to a police vehicle which a number of people attempted to prevent from leaving. The man was driven a short distance away from the group.

Anyone who recognises those in the images or anyone who has any information is asked to contact the Public Order Investigation Team on 0208 246 0076 or Crimestoppers anonymously on 0800 555 111.