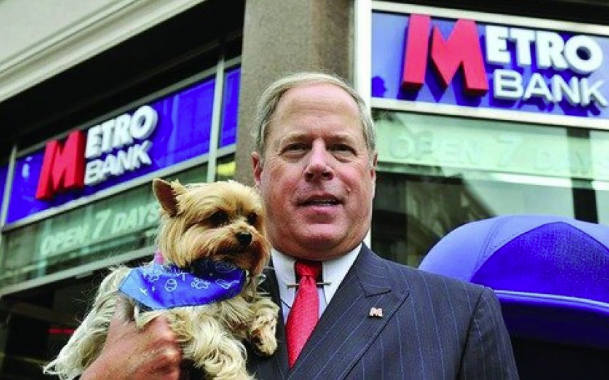 Metro Bank shares have fallen back sharply after two days of gains as investors continue to call for changes to the board following a major loans blunder.

Shares had surged 10 per cent this morning as the bank’s stock continued to recover following its annual meeting earlier this week, before falling back sharply to trade seven per cent down for the day.

The board avoided a full-blown shareholder rebellion at its AGM but more than 28 per cent of investors voted against the re-election of two directors in charge of risk – Stuart Bernau and Eugene Lockhart.

Under-fire chairman Vernon Hill also survived but 12 per cent voted against his re-election, up from the 3.7 per cent who rebelled last year.

Royal London Asset Management, which holds a 0.39 per cent stake in the bank, said the shareholder revolt was a clear demand for an overhaul.

“The high number of votes against directors at Metro Bank’s AGM should send a strong and clear signal that many of the company’s shareholders want to see decisive governance reform,” head of responsible investment Ashley Hamilton Claxton said.

The fund manager welcomed the Metro Bank’s decision to cut ties with Hill’s wife’s architecture firm Interarch, which has received more than £20m from the bank since 2010, but maintained calls for him to step down.

Hamilton Claxton said: “We still strongly believe that the appointment of a new independent chairman to lead governance reforms would go some way towards strengthening oversight, and restoring investor and customer confidence in the bank.”

Metro Bank’s stock fell as low as 475p recently before it carried off a successful £375m capital raise last week.

Shares reached as high as 886p earlier today before plunging again to 750p.

The challenger bank’s share price has now fallen 66 per cent since its admission in January that a massive accounting error resulted in £900m of commercial loans being incorrectly classified, when they should have among its risk-weighted assets.