London boasts some of the best football clubs in the world but the reputations of these institutions are not limited to what happens on the pitch.

English football fans gained a reputation for violence from the 1970s and was once dubbed the "English Disease". Since the mid-1980s, efforts by clubs and the government have helped cut football hooliganism making football today safer than its ever been.

However, the game remains far from squeaky clean and old memories still linger in the minds of fans and the public at large. Polling company YouGov has released  a survey examining how Londoners rate the fans of the capital's top football clubs.

The hostility between West Ham and Millwall fans means the Met puts derbies between the two teams in the C category, indicating a greater risk of violence.

Millwall fans are hardly alone in eliciting a bad public image. Chelsea fans trail their Millwall counterparts by just two per cent with 43 per cent having a poor impression of the central London club.

"Chelsea fans have taken the spotlight, after the police launched an inquiry into reports of two incidents of racist behaviour, one on the Paris Métro and one on a train to Manchester", writes YouGov's Will Dahlgreen . Arsenal fans are seen as the most gentile by Londoners followed closely by Fulham. 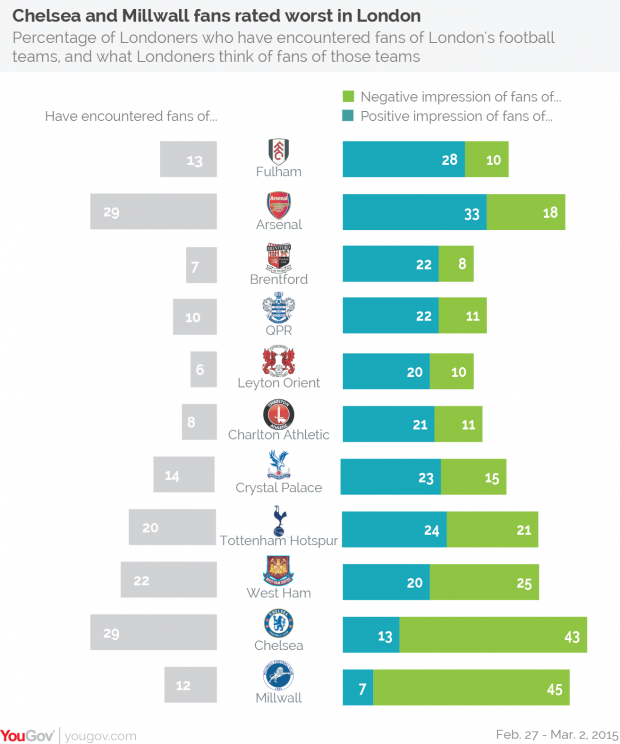