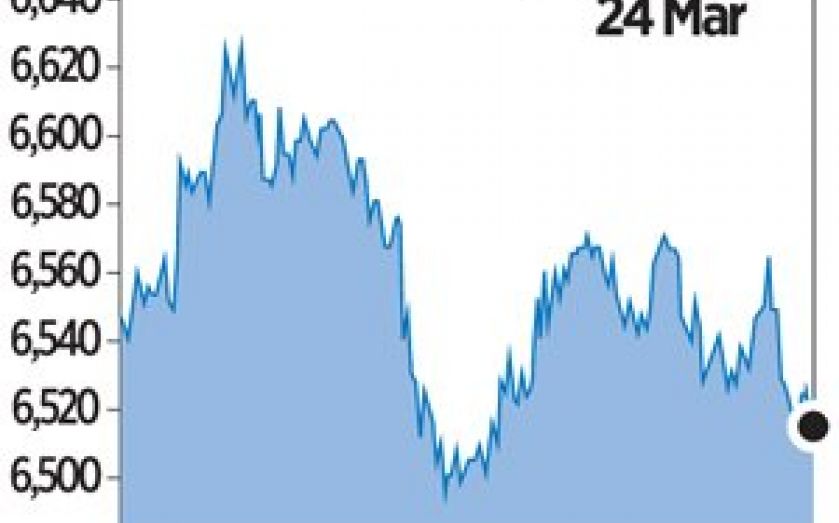 BRITAIN’S top share index fell yesterday on concerns about the situation in Ukraine and a slowdown in Chinese growth, while energy providers were hit by worries they may be forced to break up their businesses.

The blue-chip FTSE 100 index ended 0.6 per cent lower at 6,520.39 points, falling for nine of the past 12 trading sessions. It has lost more than four per cent this month.

Analysts said that overall sentiment remained fragile due to Chinese growth concerns and tensions in Ukraine. US President Barack Obama began crisis talks with his European allies after Ukraine announced the evacuation of its troops from Crimea, yielding the region to Russia.

Mining shares came under pressure on the prospect of slower growth in China after a lower-than-expected Chinese purchasing managers index. Miners Rio Tinto, Randgold Resources, Antofagasta and BHP Billiton were down 0.5 to 4.2 per cent.

“Some caution is still required given concerns about a growth slowdown in China and what’s going on in Ukraine,” Keith Bowman, equity analyst at Hargreaves Lansdown, said.

“We are seeing signs of a slowing Chinese economy. But weaker economic indicators also raise hopes that the authorities will take further action to help stimulate growth. That explains why losses in mining stocks are limited today.”

Energy firms fell on concerns of a break-up. SSE and Centrica dropped 2.3 per cent and 1.9 per cent respectively after the Sunday Times said the Competition and Markets Authority could force big energy firms to separate power-generation and retail arms.

Among other movers, plumbing supplies group Wolseley , fell 2.6 per cent on caution ahead of its results today, with investor focus shifting to margins at its US business and its outlook on 2014 profitability.

International Consolidated Airlines Group, which owns British Airways and Iberia, dropped 2.3 per cent after Morgan Stanley removed it from its “Europe Best Ideas” list and said it preferred low-cost carriers as they had scope to outperform.