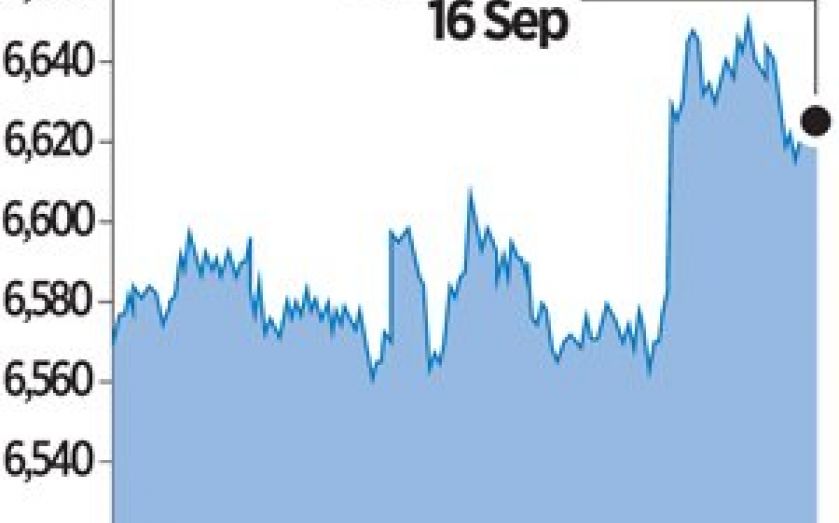 The financial sector contributed the most points to the FTSE’s rise, adding 10.6 points to the index, although miner Fresnillo slumped 12.8 per cent to the bottom of the FTSE after failing to enter a key exchange tracker fund.

Equity markets worldwide were boosted by Summers’ decision to drop out of the race to become the next head of the Fed, with Janet Yellen now seen as the new front-runner.

Yellen is regarded by investors as more supportive than Summers of the Fed’s bond-buying programme known as quantitative easing (QE), which has driven much of this year’s global equity rally, with the FTSE 100 up 12 per cent since the start of 2013.

Prospects that the Fed will this week start to scale back or taper its bond-buying programme has led to a recovery in bond yields, which in turn has boosted bank and insurance shares, since higher yields could see them make more money on interest margins and their bond investments.

In a further sign of growing confidence towards the financial sector, the British government said it planned to start selling down its stake in Lloyds, the bank that was part-nationalised after a bailout during the 2008 financial crisis.

Lloyds closed up one per cent at 77.36 pence, before the government made its statement.

“If you think bond yields are going to rise from here, you’ve got to load up with financials,” said Leigh Himsworth, head of UK equities at City Financial.

The Fed meets today and tomorrow, with many expecting the start of a scale-back to its quantitative easing programme. A Reuters poll of 69 economists showed a $10bn reduction in the Fed’s programme is expected.

Terry Torrison, managing director at Monaco-based McLaren Securities, said the FTSE 100 could retreat in the run-up to the Fed meeting but added that on a longer-term basis, he was betting on further gains on the market with “long” positions.