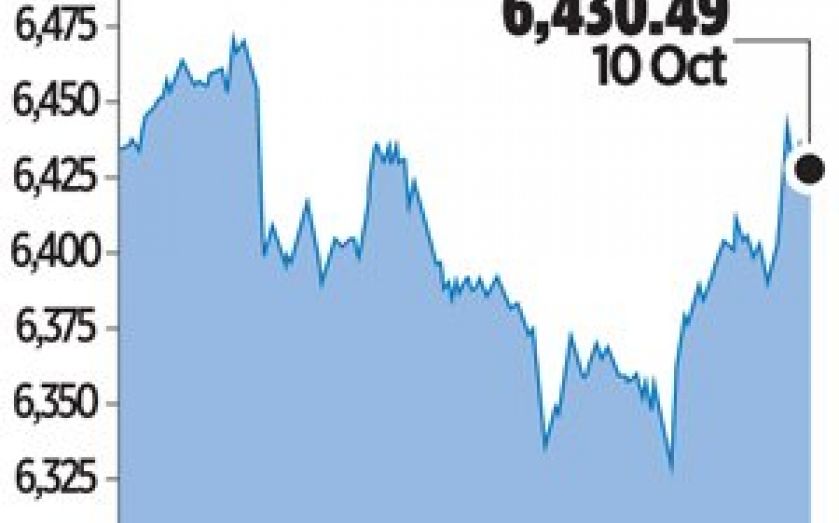 THE UK’S top share index bounced off three-month lows yesterday as signs of progress on ending the fiscal stalemate in Washington buoyed sentiment, with banks in particular leading the index higher.

Shares in Ladbrokes jumped 2.9 per cent boosted by bid speculation after software firm Playtech, was rumoured to be behind the purchase of a 2.3 per cent offloaded by Schroders.

Banks rose two per cent, while financials, which include banks, insurers and asset managers, added 31 points to the FTSE 100 – a third of its rise.

The UK’s FTSE 100 closed up 92.58 points, or 1.5 per cent, at 6,430.49, with 96 per cent of stocks in positive territory in its strongest day since early July. Equities in Europe mirrored a rebound overnight on Wall Street, which traders attributed to reports that US Republicans were looking to a short-term increase to the government’s borrowing authority to buy time for talks on broader policy issues.

“The banks are receiving a lift from the hope that the Republicans and the White House can come to some kind of agreement,” Jeremy Batstone-Carr, analyst at Charles Stanley, said.

“But putting a sticking plaster over the problem doesn’t really solve it.”

The index had fallen over the three previous days to its lowest level since 3 July on worries the US could default on its debt, and traders were wary about reading too much into today’s rise given the recent poor performance of the index.

“We haven’t really taken part in any rallies that have taken place… and we’re hardly in a strong position,” Nick Dale-Lace, sales trader at CMC Markets, said. The index broke back above the 200-day moving average that it had dropped below earlier in the week and hovered near the downtrend line from the September high.

Among the top gainers was GKN, which rose 4.3 per cent after RBC raised its target price on the stock and on news that Informa’s current finance director Adam Walker is joining next year. Earlier, while the Relative Strength Index fell deep into “oversold” territory – indicating the potential for a broader recovery in the market – the morning rebound was not enough to break a downtrend from September’s high of 6,660.

While volatility – a crude gauge of investor fear – fell 7.5 per cent early on, SecurEquity sales trader Jawaid Afsar, predicted that it would rise again as the 17 October deadline for getting a debt deal done drew closer.