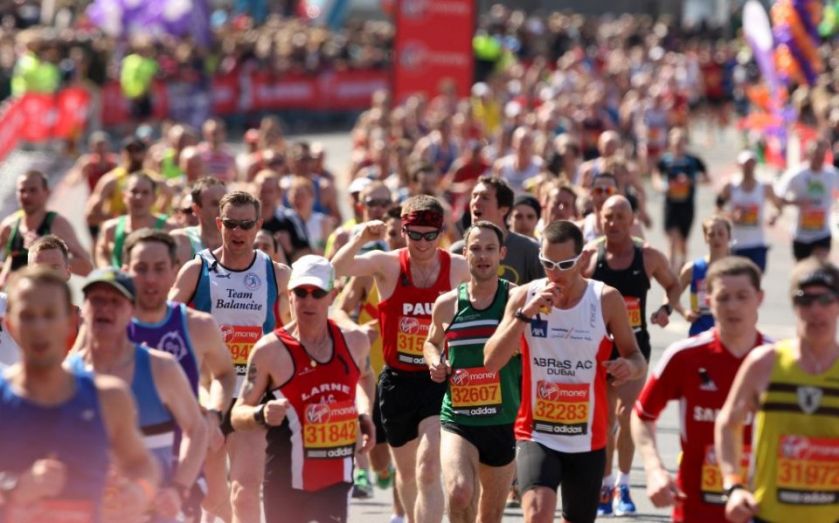 It's that time of year again. Sunday 24 April will bring chaos, pain and hopefully an overwhelming sense of achievement as 35,000 runners line up to take part in the 2016 Virgin London Marathon.

If it's your first race, or you're just a bit forgetful, here's everything you need to know to survive the 26.2m course (even if you are just watching).

It is – as always – a relatively early start for a Sunday.

The first race to set off will be the elite wheelchair race at 8:55am. Then the IPC Athletics Marathon World Cup (ambulant athletes) starts at 9am.

Elite women will begin at 9:15m, while elite men will start at 10am, along with the mass start.

For those who prefer to watch it all from the comfort of their own sofa, BBC coverage starts at 8:30am.

The 26.2 mile route snakes around some of London's best sights (Source: Getty)

Naturally the roads around the route are all closed from early morning so the only way to arrive at the start line (or indeed, get to a place to watch the spectacle) will be on public transport.

Buses, however, will not be a good alternative, as many routes will be affected by road closures. Here's the full list:

The DLR is your best bet for much of the route, but TfL has warned that the following stations will be particularly busy:

As will the following Tube stops:

"If you can, allow more time for your journey or re-route to avoid these stations," says TfL.

If you have zero interest in the London Marathon and simply want to drive across the capital… well, check out the map below for the places to avoid.

Read more: Get the full lowdown on travelling in London during the marathon.

Runners will be feeling raring to go after a double helping of pasta last night.

Those taking part have a checklist of things to make sure they have before they leave home: their running number and some safety pins; a kitbag with their running number printed on so they can find it at the other end; a sports tag and wires, an essential otherwise the time won't be recorded.

It's hugely crowded, so pre-plan a place to meet friends and family who are running, or watching you run. You may have run out of battery or there may be no signal in the crowds.

Runners should also take gels, water and so on  – but shouldn't introduce new features to the routine on the day. Race organisers warn that hydration is a “fine balance”, so don't “aggressively over-hydrate”.

Likewise, runners should not introduce new running gear – t-shirts, trainers etc – on the day. If you haven't done it before, don't do it today is the advice.

4. I'm watching – is there anywhere to avoid?

So far, it looks as though Sunday is on course to be a relatively cool day – the Met Office is forecasting cool temperatures of around 6*C for the 10am kick-off, heating up to around 9*C by 1pm, when the bulk of runners are likely to be crossing the finish line.

If you are still running (or waiting for your runner) at 4pm it looks as though things will start getting stormy. Good incentive to get those legs going.

This year the male elites include 2015 champion Eliud Kipchoge, who will take on 2014 winner Wilson Kipsang. In case you're wondering, you'll be looking at Kipchoge's time of 2:04:42 if you want to take him on.

Kimetto, who ran the Berlin Marathon in 2:02:57 in September 2014, returns after failing to make much of a splash in his London Marathon debut. Kipsang is running for the fifth time having won in 2012 and 2014.  The top 10 male runners all have personal bests of  under 2:05:30, so no pressure.

The elites are expected to go the extra mile (not literally) in the run-up to the Rio Olympics, with places up for grabs this summer.

Among the women, Tigist Tufa will be back to defend her title at the 2016 Virgin London Marathon. The second Ethiopian ever to claim the women’s title, she beat two-time winner Mary Keitany by just one second. Keitany will be back in the running and is expected to be Tufa's biggest rival.

But nine women in the elite field can boast sub-2:22 personal bests. Other challengers include reigning world marathon champion Mare Dibaba and 2015 Berlin Marathon winner Gladys Cherono, both of whom are making their London debut.

London 2010 champ and three-time winner of the Dubai Marathon Aselefech Mergia is also expected to be a strong contender.

That depends on your fitness levels, but most people would say "pretty bad".

Still at least runners won't have to keep answering that annoying question any more. You know, the one your friends and family bring up when you pull on your trainers in the middle of a hail storm, or leave a party at 9pm because you have a long run planned for the next day.

Elation, exhaustion and the overriding joy at knowing you never have to run a single metre again if you don't want to… until next year comes around of course.

On a serious note, some people might need medical attention, but there will be St John Ambulances and other medical professionals dotted throughout the course and at the finish line who will be on hand to deal with everything from blisters and sprains to exhaustion and dehydration.

But all being well, a pint and a pie will probably be in order. But you might want to book because it's going to be pretty busy….

Read more: Find a pub along the marathon route.

Eliud Kipchoge as he crossed the finish line last year. This year, you'll be in front. (Source: Getty)