London crypto leader’s book is flying off the shelves 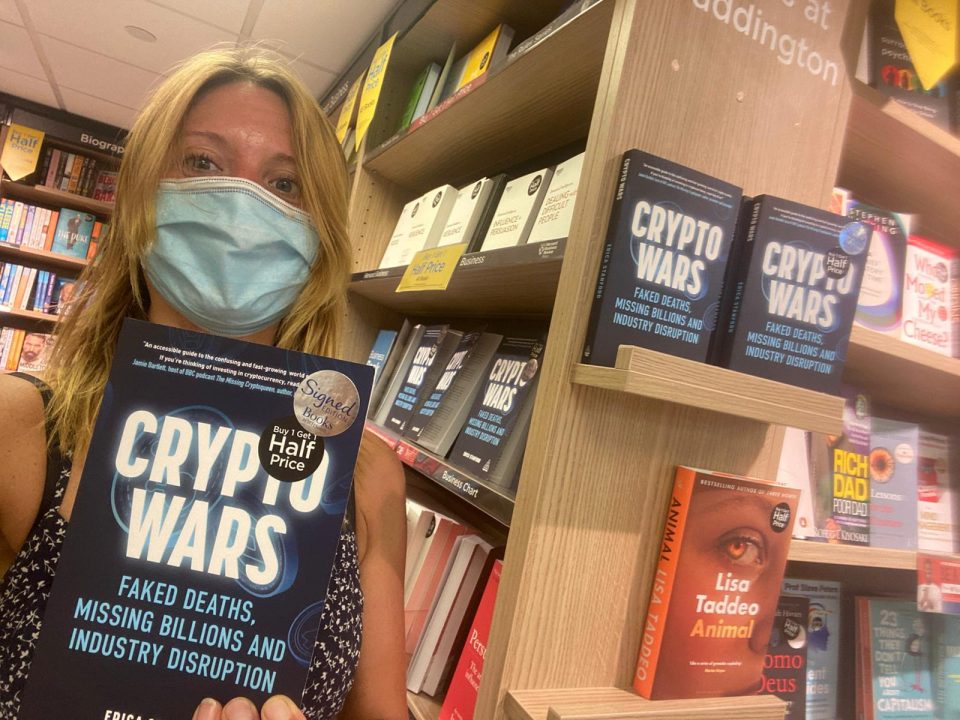 Well-known cryptocurrency figurehead Erica Stanford has become an instant literary hit with her debut book about the dark arts of crypto.

Called ‘Crypto Wars: Faked Deaths, Missing Billions and Industry Disruption’ the book has been given pride of place in the windows of shops across the capital – something that has seen the Londoner shake her head in disbelief.

“It’s been unreal – walking around the city or going into a bookshop and seeing the book you wrote right there in front of you,” she smiled.

“I went into WH Smiths in Paddington yesterday and they’ve made it ‘business book of the month’ and I was so gobsmacked that I went to the manager and said “you’ve got my book”, so I even signed a few while I was in there.

“It was a mind-blowing sensation.”

The idea for the project was suggested to the crypto enthusiast in early 2020 by the publisher, but it was the enforced incarceration of lockdown that really drove the 33-year-old’s focus to get it done.

“If it hadn’t been for lockdown, I’m not sure where I would have found the time, the energy or the motivation,” she said.

“I was researching and writing throughout the whole of lockdown – literally the best part of a year.”

Erica, who is well-known as the driving force behind the Crypto Curry Club – a popular networking group for London’s cryptocurrency enthusiasts – explores the vast array of cons and horror stories that blemish the landscape of digital currencies.

“It’s about the scams and the darker side of crypto,” she explained.

“There are some chapters about the Ponzi schemes, and also some insight into pump and dump schemes, with a focus on John McAfee and some of the things he did.”

The work skilfully navigates the problems that have hindered mass adoption of cryptocurrency yet, at the same time, explains the benefits and positive aspects that could form the future of money, without getting tangled in the complex technical data.

“I took out all the complicated techy stuff to make it easy reading and attempted to be amusing,” she added.

“What I wanted to do was, in a balanced way, explain why all the crypto hype got so big and how Ponzi schemes brainwashed people.

“It explains all the bad things, but separates them away from the good things that Bitcoin can and will do for the future – the final chapter is very much pro crypto – which I am.”

It’s certainly proving to be a winning formula – the book is flying off the shelves, and has also this week been made ‘business book of the month’ at WH Smith’s Heathrow store. It’s also been well received by plenty of readers.

“Loads of people have reached out who are really grateful for the way I’ve been able to explain it,” Erica added.

“Today, in terms of the current scams, because they’re so good, they could literally take over your website, email address etc and pose as you or your organisation to the point where you wouldn’t know it was a scam.

“They’re so sophisticated, that you might see something that is promising and you get into it to the point where you are getting money back, so you invite friends, families and associates to get involved. They too start getting rewards and then eventually it turns on them.

“And this is where the problem lies for cryptocurrency because, currently, the shadow of people associating Bitcoin with crime still hasn’t gone away.

“People are also more susceptible to falling for scams because they have lost money during the pandemic, so they’re vulnerable… and this book is, hopefully, a way of helping people understand how to avoid being targeted.”

‘Crypto Wars: Faked Deaths, Missing Billions and Industry Disruption’ is available in several bookstores across London, or on Amazon here.