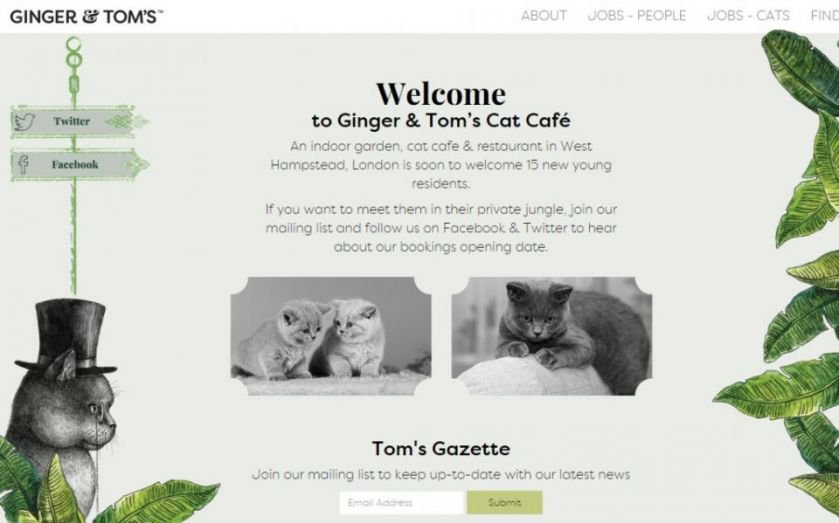 Cat lovers will be purring at the prospect of London's second cat-themed café opening its doors later this year – and this time it's jungle-themed.

Ginger and Tom's café is due to open at a site in West Hampstead in October.

Read more: London now has its own £1 café

It's being set up by Anna Kogan Nasser who is the co-founder of Lady Dinah’s Cat Emporium in Shoreditch – London's first cat café which opened last year after raising over £100,000 in public donations on IndieGoGo.

While Kogan Nasser is no longer involved in Lady Dinah's, she thought a cat-themed café would bring some "excitement and quirkiness" to West Hampstead.

"The idea will be to create a space that sells nutritious and healthy food with a decor that is very green. It will be a very cosy place with lots of happy cats," Kogan Nasser told the Ham&High.

"I have been around animals my whole life and seen cafés like these all around the world."

"Cats are very therapeutic animals and visitors will get to have an experience that’s not just eating and drinking but having something to talk about as well."

Read more: Here are the capital's most gimmicky cafes

The cat café craze started in Japan but has since swept across the world, with similar outfits opening up in France and Italy.

A wave of gimmicky cafés have opened up across London recently – including cheese-themed establishment The Melt Room in Soho as well as the infamous Cereal café dedicated exclusively to the breakfast food.