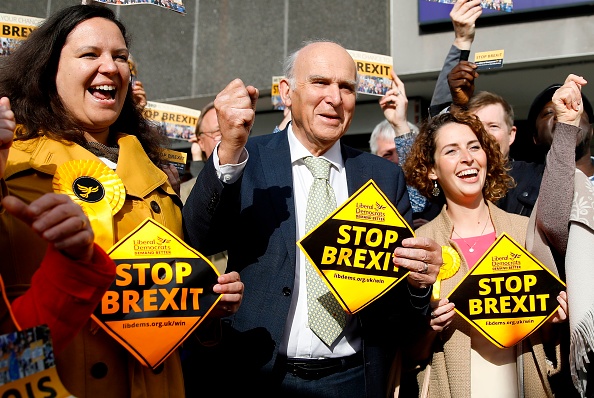 A FLOOD of cash is set to be released to the Liberal Democrats from wealthy donors if the party signs up to a Remain-focused electoral pact, City A.M. can reveal.

The cash-strapped party received just £4.8m in funding in the 12 months to March 2019 – £12.4m less than Labour – following an announcement last year that it was cutting staff at its London headquarters and scaling down its autumn conference in a bid to save money.

City A.M. has been told that the party has been offered a financial lifeline by a slew of anti-Brexit donors who were originally prepared to pump cash into Change UK, the pro-Remain party created by 11 former Labour and Tory MPs in February.

However, the splitting of Change UK – with six of its MPs walking away from the group after a disastrous European elections campaign – means the money is up for grabs by resurgent Lib Dems, but only if the party agrees to a non-aggression pact with other Remain parties.

Former Change UK MP Heidi Allen is acting as a conduit for the wealthy anti-Brexit donors, and two weeks ago briefed Lib Dem MPs on the resources available to them if they backed the plan.

A key part of the proposal involves the Lib Dems, the Green Party and Plaid Cymru agreeing to be led by new polling that would drill down into which pro-Remain candidates have the best chance of winning each constituency in a general election.

The Brecon by-election, in which the Greens, Change UK and Plaid Cymru have agreed not to field a candidate to give the Lib Dems the best chance of victory, is being used as a test case for the new alliance.

The by-election will take place on 1 August, just days after a new Tory premier arrives in Number 10.

There is funding exhaustion, they don’t want another march or campaign or petition.

– Gina Miller on why Remain donors are tightening the purse strings

One source close to the Lib Dems told City A.M. the party had seen donations pick up since the European elections in May, in which it finished second with 16 MEPs and 20 per cent of the vote.

“We saw a very significant uptick in financial support since the local elections, and then much more since the European elections,” they said, adding: “The smaller donations of around £2,500, we’re seeing dozens of new people giving that, which is good in Lib Dem terms.”

Despite the new flow of cash, the source admitted the Lib Dems “have always been desperately underfunded” and admitted the party does not have the financial firepower to seriously mount a challenge in every seat.

The attempt to form a political peace treaty comes as City donors are increasingly reluctant to put money into anti-Brexit groups, according to outspoken pro-Remain figurehead Gina Miller.

The businesswoman set up a website in advance of the European elections giving advice on how people should vote to maximise the number of anti-Brexit MEPs.

She told City A.M. that some donors are holding back from injecting more cash into various anti-Brexit campaigns as they are not seeing enough results.

Miller said: “It’s very difficult to say ‘release’… There is funding exhaustion, they don’t want another march or campaign or petition.”

Miller said the debacle over the Peterborough by-election in June did not play well with many potential donors.

DEBATE: Does it really matter who becomes the next leader of the Liberal Democrats?