European banks embroiled in the FX-rigging scandal saw their shares rise yesterday after regulatory fines came in lower than unexpected, despite further legal woes looming on the horizon in UK courts.
FTSE-listed Barclays rose 3.37 per cent and RBS increased 1.78 per cent, while in Zurich UBS ended the day 3.23 per cent higher after the fines levied came in below the amount forecast by management.
Barclays, which was fined $1.53bn, had made provisions of $2.05bn while RBS made provisons of $1.1bn and fines were at $669m (£430m).
However, lawyers in the UK are already advising potential clients, including pension funds and money managers, over potential civil actions against banks for manipulating the $5 trillion FX market, opening the door for further censure.
US legal firm Hausfield, which has already settled $410m of civil claims in the US against Bank of America, JP Morgan and UBS, said it was advising UK claimants over the prospects of a claim. They were given ammunition yesterday with the publication of transcripts showing traders colluding to fix the price. 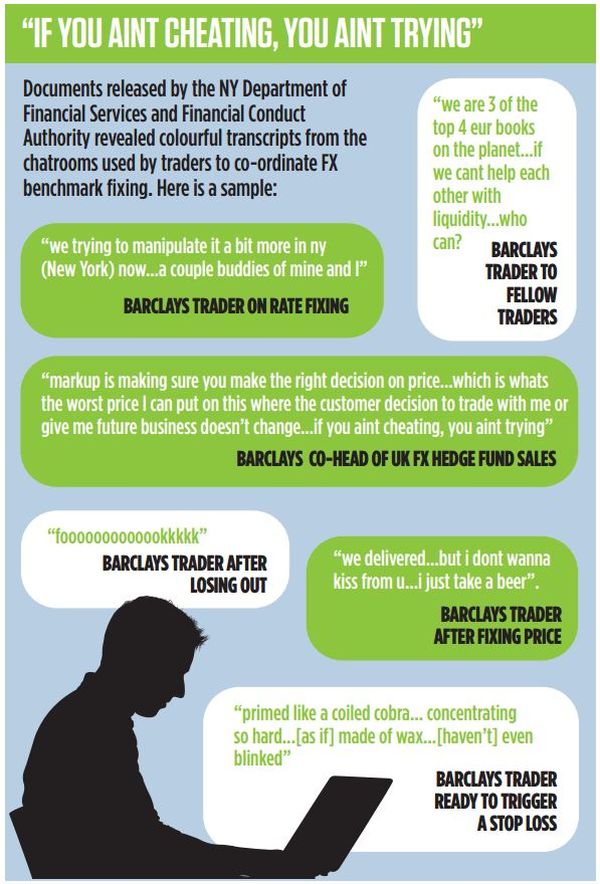 “There is no doubt that anyone who traded FX in or through the London market – and there is $5.3 trillion of business here everyday – will have suffered significant loss as a result of the actions of the banks,” Hausfield managing partner in London Anthony Maton said.
Elsewhere, Barclays and others faces further probes into other allegations of benchmark fixing.
US state and federal regulators are still probing the electronic foreign exchange market while a $115m fine paid by Barclays yesterday for allegedly fixing the ISDAfix benchmark – a global derivatives benchmark – is the first time a bank has been fined amid a long-running probe into the alleged manipulation.
US authorities are understood to be investigating around 10 banks over allegations traders rigged precious metals markets, while UK authorities are probing commodity benchmarks.