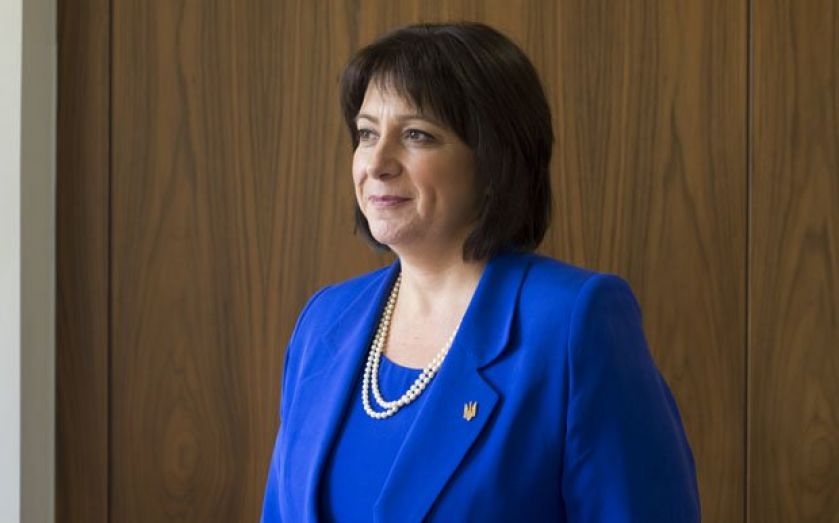 “I am facing very different challenges to those he faces,” says the Ukrainian finance minister hours after meeting George Osborne, the UK chancellor.

Natalie Jaresko is in the middle of a whistlestop tour of London and New York, during which she hopes to put her case to her war-torn country’s creditors and also to enlist the support of national governments for more humanitarian support.

She said the chancellor afforded her a good reception. She was pleased he managed to fit her in to his busy schedule ahead of an election and described the meeting as positive.

“I’m very grateful for the support we have received from the UK and the US. He talked of helping with anti-money laundering measures and we discussed the sanctions regime. It was a very good conversation with a good deal of support.” Later she added: “Personally, I think it’s hard for most people in Europe or the US to understand what war really is.”

She couldn’t help comparing the contrasting fortunes of the two countries. As Jaresko sat down to speak passionately about her task to City A.M., in between taking sips of Diet Coke, she rattled off a few statistics that make chilling reading.

There’s the nine quarters of recession, inflation of more than 20 per cent – contrast that with the zero per cent announced yesterday in the UK – and a 70 per cent depreciation of the currency. “You’ve got to realise we’re in a recession,” she says.

Jaresko is urging the nation’s bondholders, including Russia, to negotiate a debt-restructuring agreement now or risk facing bigger losses in the future.

She’s hoping that before a crucial deadline in May she can negotiate a deal involving a mixture of interest rate reductions, cuts in nominal terms and maturity extensions. “We need to improve our debt sustainability and need to shift the balance of payments outwards.”

Jaresko faces tough talks in the days ahead, especially with the two biggest holders of Ukraine’s bonds, Franklin Templeton and Russia, but she gives the impression of being more than equal to the task. Formal negotiations on the debt talks are set to begin next week.

The American-born former private equity executive has been on the challenge of her life since taking over at the ministry of finance in December last year. “When I was asked to serve it was an easy decision to make because so many people have been sacrificing so much.”

She has two daughters who live with her at home in Kiev. “My 10-year-old daughter says to me sometimes: ‘At least you can come home at night.’”

When she took the post, Jaresko visited soldiers, some of the near 11,000 people wounded because of the war being waged against her country by pro-Russian separatists. “I felt this was part of my job. I have a responsibility to the soldiers and their families.”

She says the military activities, in the seven per cent of her country that has been annexed by Russia, has brought out a tremendous spirit amongst the people of her homeland.

“There’s voluntarism and a sense of community that is striking in its strength.”

She is upbeat about the potential of the Ukraine, especially if the country can put its troubles behind it. “The challenges are immense, but I am trying to encourage new investment. We need both domestic and foreign businesses to invest in the country.”

The devaluation of the currency has given Ukrainian businesses a big boost and she sees the country’s resources base as a major asset. “This is a fantastic platform for developing manufacturing potential.”

But she’s also determined to make other changes to the economy, including bringing in what she calls the large shadow economy into the tax net.

“You cannot expect the average citizen to pay more taxes. We need to broaden the tax base and tax the wealthy more.”

As she sets off to Chatham House to deliver a lecture on the subject of the Ukraine economy, Jaresko says she feels she is doing “something of real value”. Her regret is she doesn’t currently see much of her children.

“But I tell my daughters three things when they ask me about their way forward. ‘Believe in god or fate. There’s always something greater than you are. Follow your passion. If you do that you will end up in the right place. Leave something behind when you leave this earth. Even if you want to be a clown you will be sure to leave behind some smiling childrens’ faces’.”