Just what the doctor ordered: The tech that is freeing NHS staff from pagers, landlines and WhatsApp 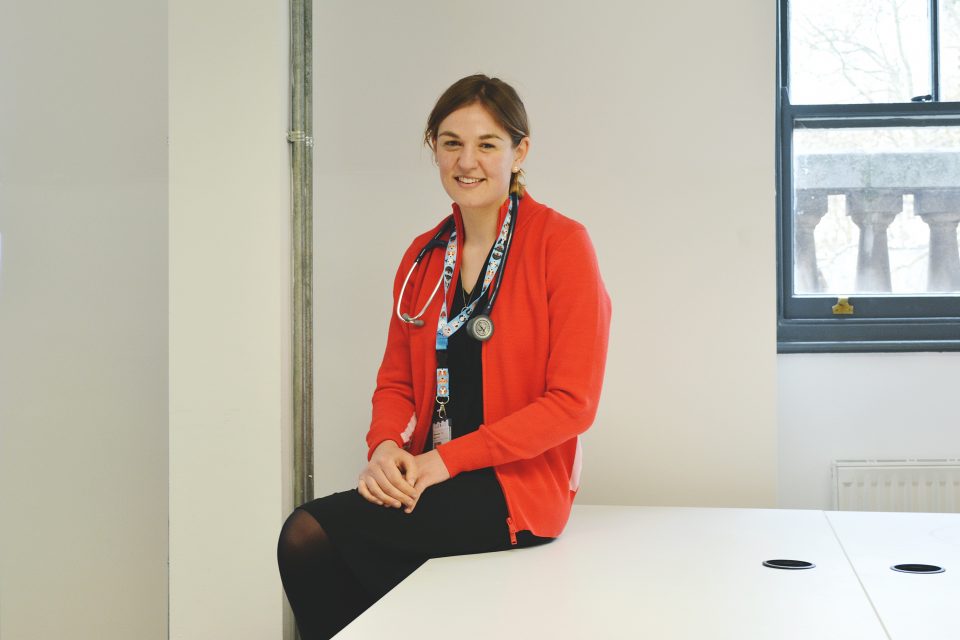 When Lydia Yarlott started working as a junior doctor in 2015, she was handed a pager. With this retro piece of technology, she was expected to communicate with her colleagues in the hospital.

For anyone unfamiliar with (or too young to know) how a pager works, the device beeps when someone wants to contact you, sending you an extension number. You then have to find a landline. But as Yarlott explains, that’s easier said than done in a hospital.

“There might be two phones in the ward and both are ringing, or you’re in the middle of a task so you can’t go and answer your pager immediately. There is a high chance that you end up missing the person who is sitting there waiting by their phone, which may also ring, or someone else might pick it up. There is lots of potential for interruption and it’s very inefficient.”

The paediatrician describes a page text as a message in a bottle, because the caller has no way of knowing whether it has been received or not, with no option but to wait until the recipient calls back.

With this in mind, perhaps it’s not surprising that so many healthcare professionals today have turned to twenty-first century software like WhatsApp to help them communicate more efficiently with each other. But this modern method is also riddled with problems.

First, WhatsApp is reliant on doctors exchanging their personal phone numbers to connect with each other.

Second, WhatsApp groups have no way of organising messages about patients in any sensible logical order.

“There is no way of prioritising, and you can’t find people by role,” Yarlott explains. “Imagine that you’ve moved hospital, you certainly don’t know that the orthopaedic registrar on call that day is called David – you have to be able to search by role.”

The other issue is that there is no way of separating personal WhatsApp chats with confidential conversations about patients – so doctors could have messages to their families mixed in among patient information. Yarlott warns that this has the potential to be really dangerous.

“There is a lot of confusion about how secure WhatsApp really is and whether it should be used to hold patient data, but the answer is it really shouldn’t be used.”

With WhatsApp being seen as a sort of sticking plaster to the communication problem, in true doctor fashion, Yarlott started concocting a cure.

We can’t afford to be inefficient about communication, because we don’t have extra doctors to pick up the slack

With the help of a team of technologists, she has built a secure instant messaging service called Forward Health designed for doctors, nurses, midwives, and other clinicians. Through the app, NHS staff can search by name or role in a hospital or clinic, share patient notes and photos, with everyone working off the same list.

On average, the app saves each clinician 43 minutes per shift, which is time that would usually be wasted waiting for a colleague to call them back. It means that doctors can access the info they need anywhere in the hospital, ultimately allowing them to move away from paper notes.

It’s a simple idea, and remarkable that nothing like this existed in the NHS already, which just goes to show how far behind official hospital technology – still heavily reliant on pagers – really is. And it’s worrying that old-fashioned and counterintuitive tech is exacerbating existing issues in the NHS, making the working lives of staff even harder.

“Software should be a joy to use, rather than something that gets in your way,” says Yarlott. “We can’t afford to be inefficient about communication, because we don’t have extra doctors to pick up the slack. People who work in the NHS should feel like they have a choice or some autonomy about the tools that they use.”

The NHS is populated by people who really care, but it’s losing staff because people are getting burnt out

Forward has raised $5.4m to date and is now being used by over 15,000 clinicians at 150 NHS hospitals and care commissioning groups – impressive given that it only launched officially last year. But it’s hardly surprising that overstretched NHS workers are jumping on the chance to use software that could make their jobs easier.

Yarlott, who works part-time as a paediatrician while running her startup, says the sad truth is that the systems in place don’t help the doctors, and therefore are a hindrance to patients too. “The NHS is populated by people who really care, and that makes it an amazing place to work, but it’s losing staff because people are getting burnt out. There are ways to help people do their jobs more efficiently, so ultimately they get more time with their patients.”

The scope of the Forward software goes even further. More succinct communication between specialists working in different fields of the healthcare system could prevent patients from being readmitted, and ultimately free up hospital beds.

Readmittance is a huge problem, particularly among elderly patients. Yarlott explains that before a patient is discharged, the doctor, physio, and occupational therapist need to get together and have a discussion in order to coordinate their transition out of hospital back to their home.

That communication is made a lot easier through the app, which even enables photos to be shared virtually as evidence of whether a patient’s home needs to be modified to make it safe for them to return.

“Keeping people out of hospital takes collaboration between local authorities and social services to make sure people can be discharged to safe, equipped houses. That’s where I would like to see Forward go – because healthcare includes social care, and we should be operating a lot more holistically than we do already through preventative measures.”

Yarlott would also like to see her app used to connect healthcare professionals with patients. “At the moment, we’re focused on how useful professionals are finding the platform, but we would eventually like patients to be connected and given updates on what’s happening to them. I really believe in democratisation of healthcare.”

While bringing NHS tech into the modern era is vital, the organisation is such a vast and complex web that updating the system is painfully difficult – not to mention the fact that trusts tend to make standalone decisions, rather than learning from each other.

“Everyone talks about this holy grail of overarching system that will pull in data from everywhere, but realistically that’s still a long way off,” says Yarlott. “To solve the problems, you need to go right back to basics and find out how it’s working today.”

Trying to overhaul the NHS is not for the faint-hearted, and even this young entrepreneur admits that many doctors often feel like it’s never going to change. But Yarlott clearly has her finger on the pulse, and her business is already making a difference.