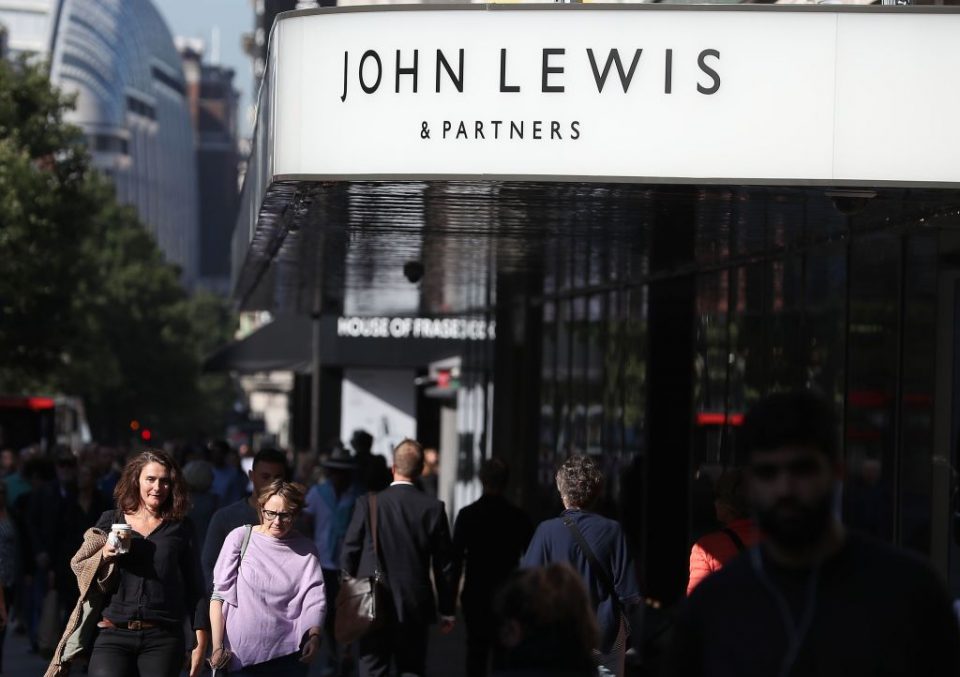 The retail partnership warned full-year profits will be “substantially down” on last year as it revealed significant drops in both John Lewis and Waitrose revenue.

It also said managing director Paula Nickolds will step down in February, calling it “the right time for her to move on”.

The department store chain also warned it may not pay a bonus to staff for the first time since the 1950s.

“The Partnership Board will meet in February to decide whether it is prudent to pay a partnership bonus,” John Lewis Partnership chairman Sir Charlie Mayfield said. “The decision will be influenced by our level of profitability, planned investment and maintaining the strength of our balance sheet.”

Waitrose also suffered a 1.3 per cent decline to £1.03bn due to shop closures, though like-for-like sales rose 0.4 per cent.

Meanwhile, digital sales at Wairtose rose almost 17 per cent, with Christmas grocery orders up 23.4 per cent. But John Lewis reported a subdued 1.4 per cent rise in online shopping.

Mayfield said: “We saw a good sales performance in Waitrose & Partners, despite a weak grocery market, with like-for-like sales up 0.4 per cent.

“In John Lewis & Partners like-for-like sales were two per cent down on last year. Operationally – across availability, service, delivery and online – we saw a strong performance in both brands.”

Mayfield hailed a 4.7 per cent rise in beauty sales to put the division “comfortably ahead” of rivals. But home sales and electrical sales dropped 3.4 per cent and four per cent respectively.

While the partnership expects Waitrose profits to be broadly in line with last year’s results, at John Lewis, “profits will be substantially down on last year”.

“ We therefore expect that Partnership profit before exceptionals will be significantly lower than last year,” the company warned.

MD Paula Nickolds to step down

Nickolds was set to become executive director of brand and marketing as well as service and digital innovation across the group but the board and Nickolds have had a change of heart.

John Lewis said: “After some reflection on the responsibilities of her proposed new role, we have decided together that the implementation of the Future Partnership structure in February is the right time for her to move on and she will leave the Partnership with our gratitude and best wishes for the future.”

Read more: John Lewis to axe a third of senior managers to save £100m

The restructure at the partnership will unite the John Lewis and Waitrose leadership teams under one structure in time for the arrival of former Ofcom boss White.

The shake-up has reportedly cut one in three senior management roles.

John Lewis initiated the overhaul after recording a pre-tax loss of almost £26m in its half-year results.

Richard Lim, chief executive of research firm Retail Economics, said: “These figures confirm that trading is tough and news that the MD is stepping down could signal just how uncomfortable life is getting.

“Excitable Edgar did little to fire up Christmas sales with declines across non-food and a woeful performance in the online business which barely showed any signs of growth.”

While the later timing of Black Friday last year could have led to shoppers buying their Christmas presents early, Lim warned John Lewis’ motto never to be beaten on price may have also hurt the retail giant.

“In this hyper-competitive industry, their price matching promise is likely to have eroded margins further against the backdrop of rising operating costs,” he warned.

Read more: 2019 was the worst year on record for the retail sector

“The retail environment is obviously strained,” he added.

“The issue here is one of relevance, as with all retailers,” said Peel Hunt analyst John Stevenson. He criticised John Lewis’ longstanding price match promise, saying it is harming profit. “The price promise, which excludes many online players, is not relevant to consumers, whose first place of price comparison is online,” he pointed out.

Kantar’s principal fashion analyst,  Anusha Couttigane, concurred, adding that shoppers taking advantage of the price match on Black Friday “has had a noticeable horn effect on the rest of the period”.

She pointed to “subdued demand in the run-up to Christmas compounding the retailer’s investment in competitive pricing”.

“The competitor intensity with Mike Ashley’s House of Fraser starting to get his act together in recent months continues to pose challenges,” Shore’s research note read.

“Meanwhile Debenhams limbs on after a rescue cash call of £50m from its lenders pre-Christmas.

“In our view, John Lewis department stores should be performing better in trading terms given that its two principal competitors have struggled in recent years and will both downsize their store portfolios. We get the sense that Sharon White will instigate a big change programme, which is perhaps, long overdue at the John Lewis Partnership.”

As it stands, analysts concurred that many things must change at John Lewis, which could cancel its employee bonus at the end of the financial year.

Last year the retail partnership came close to doing just that, and in the end paid its 84,000 staff a small five per cent bonus, down from 18 per cent in 2011.