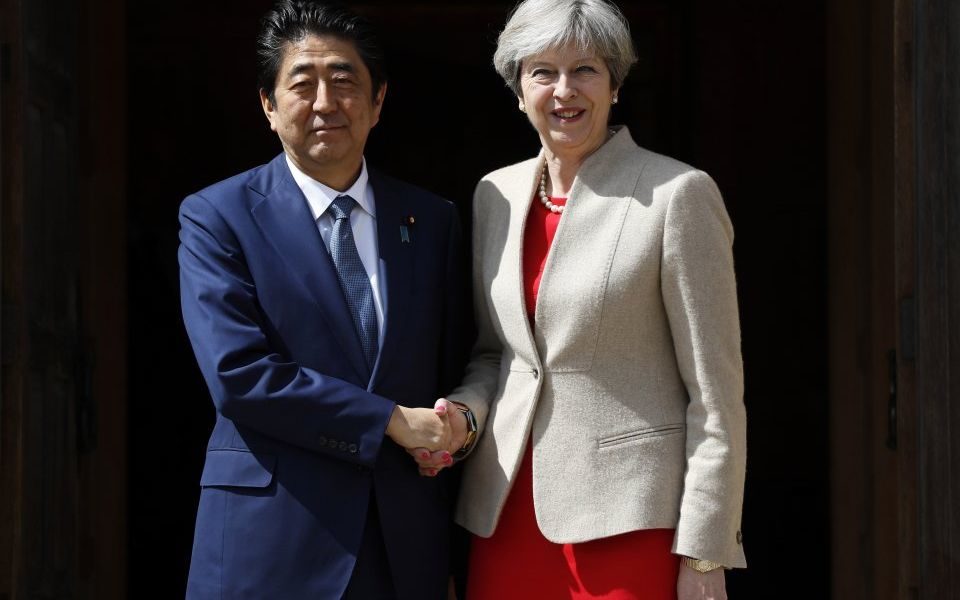 The “whole world” wants to see a ‘no deal’ Brexit avoided, according the Japanese Prime Minister Shinzo Abe.

Flanking Theresa May at a press conference in Downing Street on Thursday evening, Abe dialled up the pressure on MPs planning to vote down the Brexit agreement.

Around 1,000 companies in the UK are funded with Japanese money, employing 142,000 people, and in April last year the country’s ambassador warned May companies such as Nissan, Toyota and Honda could leave if Brexit hit profits.

May has repeatedly claimed her deal with the EU would enable trade with the bloc to remain as near to frictionless as possible and would see no tariffs imposed.

If her Brexit agreement is defeated by MPs in parliament next Tuesday, the prospect of the UK leaving the EU without a deal – and therefore incurring tariffs – greatly increases.

After praising the economic ties between the UK and Japan, Abe said: “It is the strong will of Japan to further develop this strong partnership with the UK, to invest more into your country and to enjoy further economic growth with the UK.

“That is why we truly hope that a no deal Brexit will be avoided and in fact that is the whole wish of the whole world.”

The intervention from Abe came as a two Conservative MPs who had previously vowed to vote against the deal announced they would now back the agreement.

Mid Norfolk’s George Freeman and Copeland’s Trudy Harrison told parliament they would vote with the government next week, with Harrison claiming the threat of no deal was too big to ignore.

However, with more than 100 Tories still opposed to May’s plan, the Prime Minster made phone calls to trade union leaders on Thursday in a bid to win their support.

Downing Street confirmed May spoke to Unite’s Len McCluskey and the GMB’s Tim Roache for around 10 minutes each in what were described as “constructive” phone calls.

Her efforts to woo the union leaders seemed to have failed, with Roache tweeting: “After nearly 3 yrs, glad PM finally picked up the phone. I was crystal clear about GMB’s position – her deal is a bad deal and flaky assurances on workers' rights won’t cut it.”

Labour leader Jeremy Corbyn used a speech in Wakefield on Thursday morning to reiterate his MPs will be told to vote against the deal.