Outside, the sun is blazing hot, a white glare cast across a vast expanse of snow. Inside the ice cave, it’s one degree above freezing; a gleaming cool blue cut through with a trickling lake of glacial water. Centre stage is a moulin, a frozen “straw” of ice that glows as the sunshine above ground seeps down.

It’s an awesome sight, and so alien a landscape that filmmakers used it as a stand-in for the arctic in the X-Files. But this is no extraterrestrial world. The Pemberton Icecap is a 20-minute helicopter ride from Whistler, in Canada’s British Columbia region.

A day out like this, with Head-Line Mountain Holidays, is one of an increasing number of high-flying, high-octane, high-everything holidays organised for, you guessed it, high-end customers.

“The sky’s the limit,” says Matt King, Head-Line’s director of operations and tour guide for the day. “We have corporate events up here with fully catered barbecues and a chance to hit a few biodegradable balls over the icecap.

“A few days ago we had ice climbers hauling themselves up through the caves. Then there was a fashion shoot. My job was to give out ski boot warmers for the models to tuck under their armpits to keep warm,” he says with a grin.

Pointing to a rather nervous looking man who has just arrived on the next helicopter, he says: “There are a lot of proposals up here. I think that guy’s about to pop the question to his girlfriend.” 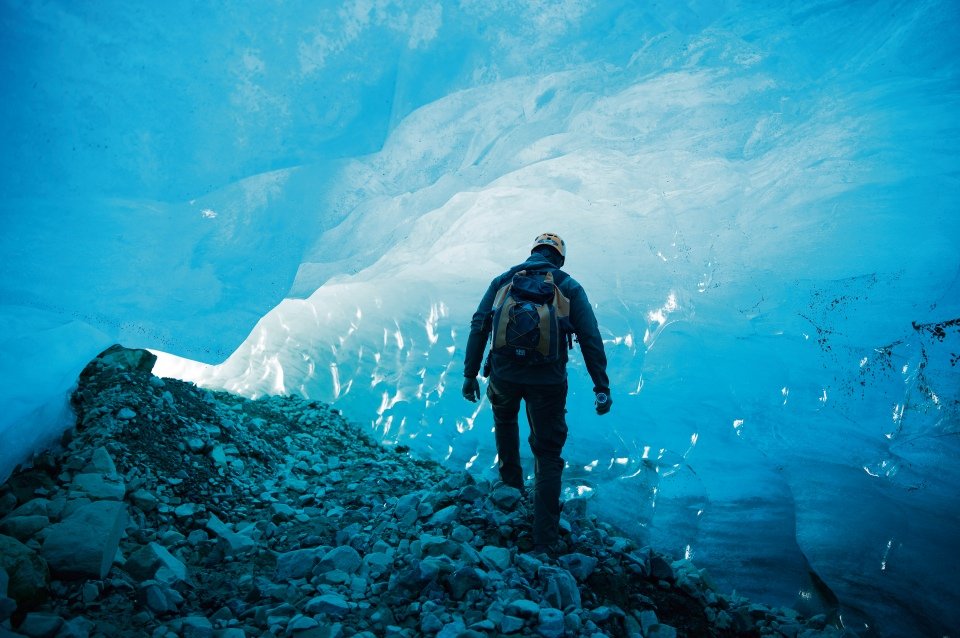 A scheduled visit to the ice caves costs around CAN$1,300 per person, but Head-Line is also tapping into a different market, with bespoke tours (some costing up to $500,000) that range from stays aboard luxury yachts and in specially built igloos, to flights over desert canyons and scenic mountain ranges. You can stay in a snow castle, as Seal did when he proposed to Heidi Klum, go snowmobiling or even charter a submarine.

“There’s so much to do here,” says Matt. “More than anything you need a taste for adventure.”

Doug Washer, founder of Head-Line, certainly has that. A former snowmobile tour operator, he started exploring the Pemberton Icecap nearly 30 years ago. The beautiful scenery of British Columbia ranges from backcountry wilderness to the urban playground of Vancouver, pristine Pacific beaches and the ski and board mecca of Whistler and Blackcomb. And like the 300 square kilometre icecap itself – the southernmost of five giant icefields in British Columbia – the business has become something of a behemoth.

“We are an events management company really; designing holidays and working with professional pilots, chefs and guides,” says Washer. “Our people work both in the film industry and in guiding.

“Most of the land in BC is owned by the crown but you can get land tenure and there’s a lot on our doorstep. We’re lucky enough to have close access to the coast, the icecap, the desert as well as private hot pools and islands.

“So our clients can ask to go heli-rafting, have a romantic dinner in an ice cave, charter a luxury yacht. We’ve had people take an eight-day holiday which requires four dedicated aircraft plus two helicopters to move around chefs and crew.

“Then we get a lot of people filming up here too – lots of TV shows and commercials. Just recently there was a joint Canadian and Chinese film being made, with the icecap standing in as Mount Everest. Coors beer made an ad up here, and there are a lot of documentaries filmed too. National Geographic teams were here recently.” 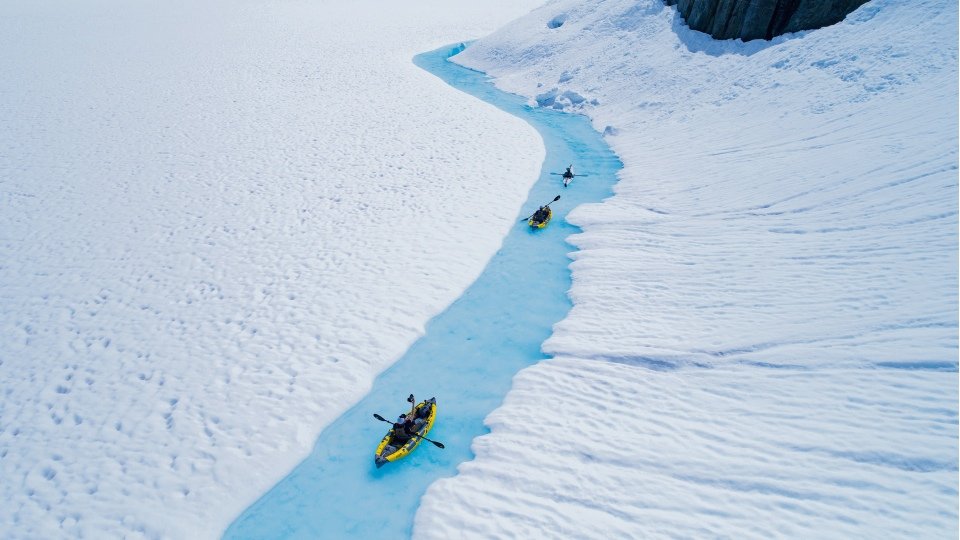 The ice caves will not have shown up in many movies yet, he says, because they have only been accessible for the last five years or so – a reminder of how quickly the icecap is changing.

“It’s such a dynamic and changing environment and that’s why we’ve partnered up with Simon Fraser University in Vancouver to monitor the change,” says Washer. “The icecap is deflating – imploding and becoming thinner.

“A lot of what we do up here is research. We are photographing and monitoring it. It helps us plan ahead for how our operations may need to change.

“It’s not going to impede us in our lifetime but going forward we need to see how it (our operations) will impact the environment.”

The former forest industry pilot has spotted a unique gap in the tourism market – who wouldn’t want to go paddling in what feels like a giant slushy pond suspended at the end of the earth?

On the other side of Vancouver, another high-flyer, Nick Drader, offers tourists an alternative way of testing their vertical limits and getting back to nature. A half-hour flight from Abbotsford, Compass Heli Tours takes visitors to the Cascade Mountains to go glacier kayaking.

The former forest industry pilot has spotted a unique gap in the tourism market – who wouldn’t want to go paddling in what feels like a giant slushy pond suspended at the end of the earth?

On a June visit, the glacial lakes had thawed, creating an aquamarine circle of meltwater, surrounded by a canyon of snow and ice.

Though too icy to take a lap round the whole circuit, the feeling of splashing around in a kayak on near-frozen blue waters is incredible.

Drader’s tour, costing $5,000 for four, includes a 60-minute sightseeing trip, a gourmet picnic lunch and a stop-off at a scenic lake.

In keeping with the “Super Natural” mantra of British Columbia, Nick takes away almost everything after each visit, leaving a minimal “footprint” on the land.

Apologetically, he explains that he has to keep the kayaks at the glacier because they are too heavy to bring each day, but he does have some credit in the eco bank.

“As a forestry pilot I used to spend my days releasing pine cone seeds over forests to help more trees grow,” he says. “I must have released 20 billion so I reckon I’ve done quite a bit for nature.”

To book your trip to British Columbia visit hellobc.co.uk and explore-canada.co.uk

Scott Dunn offers a seven night trip to BC from £6,500 per person including flights, accommodation and heli-excursions.Visit scottdunn.com or call 020 8682 5030 to book.

For accommodation in Vancouver, stay at the Shangri La (shangri-la.com) from £295 for a superior room with breakfast and parking, or the Westin in Whistler (whistler.com) from £110 per night for a queen room (with sofa bed) and breakfast.