You can see what markets think of the two events in the yields of UK 10 year government bonds – which imply the cost of government borrowing.

Here's how they changed (very little) during Osborne's Autumn Statement, which began at 11.15am. Even that jump at 12.00pm is probably the result of the Bank of England's Monetary Policy Committee deciding to hold policy. 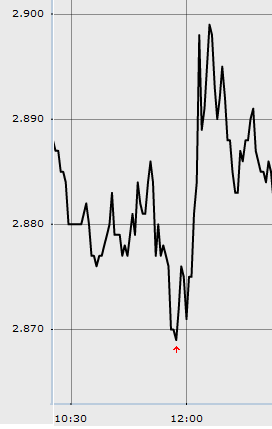 Now look what happens when all that strong US data comes out – and investors start to wake up.

Off the back of that stronger US data and some dovish tones from European Central Bank president Mario Draghi sent 10 year yields much higher – to a peak of 2.929 per cent.

So while Osborne's early words may have sent borrowing costs down a fraction to 2.869 per cent, events that markets considered more significant would see them shoot up to a peak 0.06 percentage points higher.