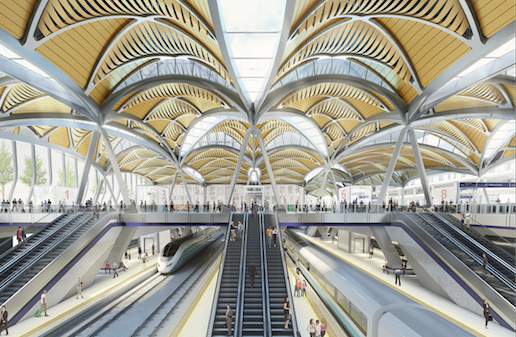 High Speed Two has released images of its progress at Euston station, where it has demolished BHS’ flagship warehouse.

Euston station marks the starting point of the £56bn railway, which will connect London to Birmingham in the first phase, and the West Midlands to Leeds and Manchester in the second.

BHS, which was owned by business tycoon Philip Green, collapsed into administration into 2016. The former warehouse was the centre of the department chain’s distribution network in the capital.

Contractors Costain and Skanska demolished the building over eight months. The new station is being designed by Arup/Grimshaw and will be built by a Mace/Dragados team.

Meanwhile, A Costain, Skanska, Strabag joint venture will deliver the tunnels for HS2 services from Euston to Old Oak Common.

Read more: Stick with HS2 or scrap it? Where every Tory leadership contender stands on the £56bn railway

Hs2 says the wider development of land around the station, which is being developed by Lendlease, could deliver 2,000 new homes and 15,000 jobs.

The fate of HS2 hangs in the balance as the Tory leadership contest gathers apace. A number of runners, including Andrea Leadsom, Rory Stewart and Esther McVey, have indicated their scepticism at the project and hinted they may scrap it.

DEBATE: Is it time to accept the sunk cost and scrap HS2?

HS2 chair to carry out project review to ensure 'it is deliverable', says Chris Grayling