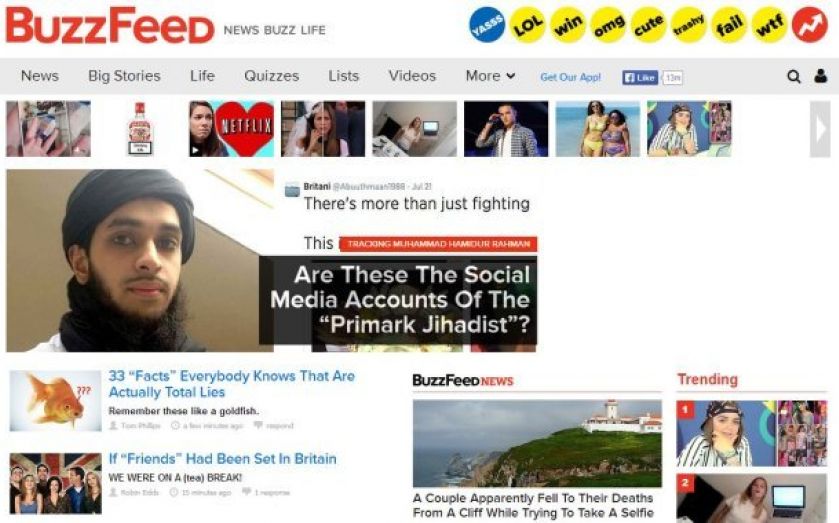 BuzzFeed, the spiritual home of lists, cats and OMG labels, has just secured a further $50m (£30m) in investment, reportedly seeing it valued at an impressive $850m (£506m).

When you consider that the Washington Post was bought by Jeff Bezos for a paltry $250m (£149m) last year, this is a figure that should make you stop and take notice as much as any of BuzzFeed’s fabled clicky headlines.

It also makes those observers dismissive of BuzzFeed after its initial 2006 launch – and there were many – look a little less astute than they probably thought they were back then.

But it shouldn’t come as a surprise.

For the last eight years, BuzzFeed has actually been doing what every startup worth its salt plans to do: disrupt the industry it has entered. And it can now justifiably claim that it has changed the way its competitors approach the way they go about their business.

A quick look at any of the UK’s more traditional newspapers’ digital propositions reveals more than a hat-tip towards the BuzzFeed way of doing things, from overtly clickable headlines to attention-grabbing list pieces via the occasional cat Gif. There have also been a few which have appeared clearly hoping to emulate the site's success, including the failed People website and the recently-launched i100 from the Independent.

Producing content specifically targeted at social media users has become second nature for these publishers, but it was BuzzFeed which blazed the trail for others to follow with its famous so-called listicles and ‘You’ll never believe’ headlines.

The site has also, however, built this content-creation machine on a sound commercial foundation – or, as Chris Dixon, the Andreessen Horowitz partner who has just joined the board, puts it, a "full stack startup".

Of the 550 people who work for BuzzFeed, only 200 or so are in editorial. Most of the rest are spread across technology, sales and what founder Jonah Peretti and his team call data science.

And it is these data scientists and analysts who ensure brands who work with BuzzFeed get what they want – an accelerant effect on the co-produced native advertising content designed to mimic the look and feel of the editorial content on the site.

And it clearly works. To quote Dixon after he helped engineer the latest round of investment:

BuzzFeed now reaches over 150m people per month, is consistently profitable, and will generate triple digit millions in revenues this year.

Of course, it has not all been plain sailing for Peretti and his team. There are many detractors who continue to argue that the type of content BuzzFeed produced is light in substance and, only last month, the company was forced to fire one of its more prominent editorial staffers when viral politics editor Benny Johnson was found to have plagiarised 41 articles he'd published on the site.

There is also always the danger that a major change in the algorithms of social platforms like Facebook could see BuzzFeed lose its ability to pour fuel on its posts through social sharing – and therefore give its advertisers the exposure they have come to expect.

But, for now at least, BuzzFeed is a force to be reckoned with from both an editorial and commercial perspective. Its success and current valuation represent a change in the landscape for media companies, especially those with a strong pedigree in print or on TV.
It's now clear that years of history and prestige mean very little unless you have a commercial model which convinces investors that the advertising dollars will continue to roll in for many years to come.
As Peretti himself puts it:

Over the last decade, traditional media has been upended by technology, a disruption of the print, video, news, entertainment and advertising industries that is now accelerating at lightning speed. We created BuzzFeed because people still want to be informed, entertained, and inspired but the way they consume media has dramatically shifted.