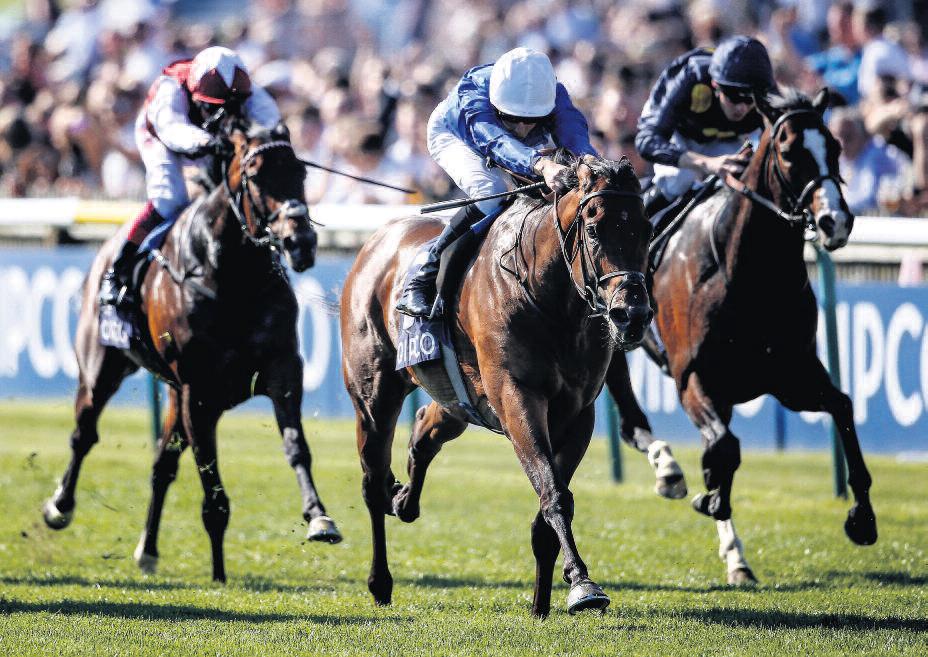 THERE seems to be no stopping jockey Frankie Dettori at the moment and the 48- year-old Italian doesn’t just have the ride on Enable to look forward to at Sandown tomorrow.

Once again, he teams up with John Gosden and the pair look to have a leading chance in the Coral Distaff (3.00pm) with MUCHLY.

The three-year-old filly failed to see out the 1m2f trip at Goodwood last time when she travelled ominously well into the race.

Before that, she gamely held off the talented Queen Power over a mile at Ascot in May and the return to this trip on fast ground looks ideal.

She showed a terrific attitude that day and the 9/2 available with Ladbrokes looks worth snapping up.

It is remarkable to think it was just over a year ago that he was sent off 9/2 for the French Derby having been unbeaten in his only two previous starts.

The soft ground and trip seemed to cost him that day, but he ran well nonetheless and was beaten less than four lengths by the winner.

He was then sent off favourite back on fast ground at Royal Ascot in the Hampton Court Stakes where again he wasn’t disgraced.

Since then, his career has been somewhat derailed with an unsuccessful four-race stint back in Dubai in January and February.

His only decent run came when dropped to this trip when he was fourth to Desert Fire in a blanket finish.

Connections took the drastic step of gelding him back in April and he was quietly fancied for the Royal Hunt Cup at Royal Ascot a few weeks ago before the rain came.

In the end he ran better than his finishing position implies on ground that wouldn’t have suited.

He has been dropped another 2lbs by the handicapper here and looks sure to get the strong pace and sound surface he has been crying out for.

There is every chance a mark of 103 may seriously underrate his ability and he looks a cracking each-way bet at 9/1 with Ladbrokes.

The opening race on tomorrow’s card is the Coral Charge (1.50pm) which sees a clash of the generations over Sandown’s five-furlong course.

Caspian Prince, MUTHMIR and Ornate fly the flag for the older horses against a host of three-year-olds.

It has been very even over the last decade with five winners apiece and I’ve a sneaky feeling the senior brigade may come out on top this time.

Muthmir was only just touched off in this race 12 months ago having run well to be fourth to Battaash back in 2017 when set an impossible task at the weights.

He didn’t endure the smoothest of passages on either of those occasions, but showed himself in great form when fifth off a massive weight in the Dash at Epsom.

He will relish the fast conditions and looks overpriced each-way at 6/1.

With the weather set fair over the weekend, make sure you get down to Sandown today for Ladies Day or tomorrow for the big one.

Tickets are still available for both days but they are expecting a record crowd this afternoon and a monster turn out tomorrow as well.