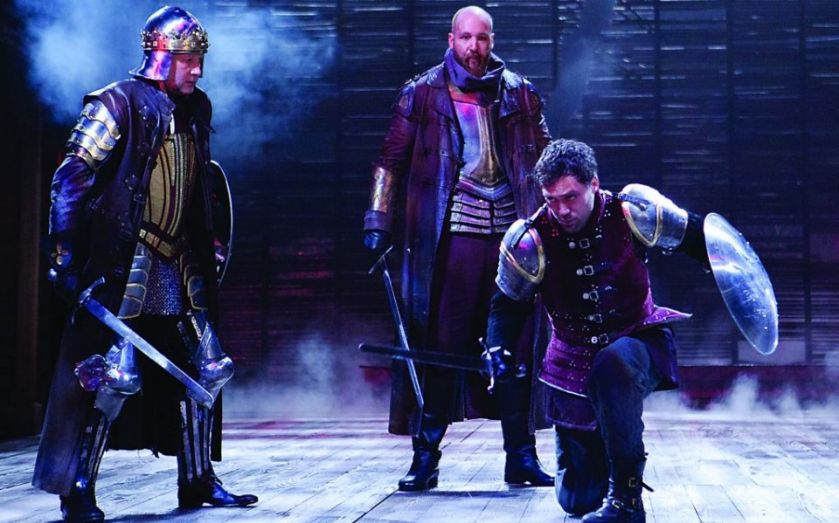 Barbican | ★★★★☆
The Henry IV plays occupy an odd place in Shakespeare’s canon. They have the dimensions of a soap opera, spanning the breadth of society for the entire duration of a reign. They’re tonally inconsistent, flashing from palace to pub, and sparse of incident. Tense battles conclude with the blackest of comedy, and the threat of the hangman always looms over the sack-drinking revellers.
Gregory Doran’s RSC production, now at the Barbican after completing a UK tour, plays up these expansive qualities. A month ago, Phyllida Lloyd’s all-female version at the Donmar transformed them into a taut thriller. Doran inclines towards the opposite extreme – male-dominated, period set, unhurried – but manages to create something no less contemporary.  This is Shakespeare for the Game of Thrones age, a polychromatic, character-based romp.
Anthony Sher plays a splendid Falstaff. Ruddy-faced and corpulent, his jollity disguises his fundamental self-interest. He never fails to charm, even as we see the shrewd brute within. Alex Hassell’s Prince Hal has taken cues from this duplicity. His gleeful antics disguise a smug insouciance, setting him apart from Falstaff’s crew. With Poins, he is a mischievous schoolboy, for whom everything is a game. We can never quite trust him, and his eventual return to grace seems more a betrayal than a vindication. Jasper Britton makes a thunderous King Henry, commanding yet anxious, with a slight hint of humility beneath his regal haughtiness.
The RSC brings a well-honed consistency to their performances, granting psychological subtly to many of the minor characters. Paola Dionisotti’s Mistress Quickly has the plucky grit of Peggy Mitchell, while Joshua Richards’ turns as a laconic Bardolph and prolix Owen Glendower possess impeccable comic timing. Oliver Ford Davies makes an irresistibly wistful Shallow.
Doran is adept at the memorable set-piece, aided by Stephen Brimson Lewis’ imposing, versatile design. The battle at the close of Part One is genuinely terrifying, transforming the space into a labyrinth of brutal skirmishes. There are some ingenuous scene transitions, where the gaps become a vehicle to allow remote characters to interact.
The two plays together span six-and-a-half hours, and sometimes along that path Doran loses his way. The prologue of Part Two, with a contemporary setting, seems cut from a different production. When Falstaff conscripts his “food for powder” in Part One, it is played as a chilling demonstration of his immorality; equivalent acts in Part Two are treated as farce, deflating the pathos of the earlier scene. And Trevor White’s Hotspur exudes a palpable sense of threat, always on the verge of violence. But though dramatically thrilling, such a performance airbrushes the character, turning him into a comic book psychopath rather than a credible foil for Prince Hal.
Besides a few quibbles, though, this is a delightful rendition of two great plays, one that allows Shakespeare’s wit ample breathing space. Although it offers no revelations, few productions feel so complete in their journey through the Bard’s imagination. When Hal ascends to his throne, you’re left wanting to linger in his world a while longer.