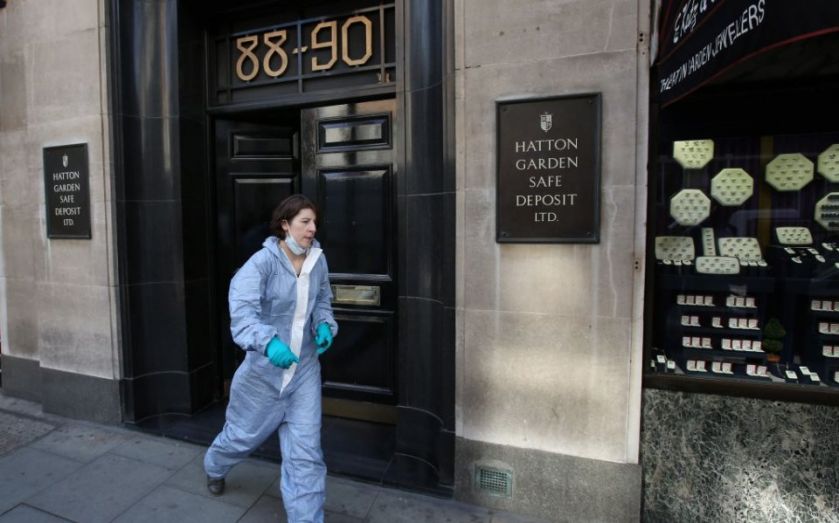 The Flying Squad has released the first set of images showing how they believe the Hatton Garden jewel heist was carried out.
The images include a picture of the vehicle and the scene the officers found when they arrived at Hatton Garden Safe Deposit
The police believe the hole into the vault was dug out using a heavy duty drill – a Hilti DD350. The hole is 50cm deep, 25cm high, and 45cm wide; and sits 89cm from the floor.
“The vault was covered in dust and debris and the floor was strewn with discarded safety deposit boxes and numerous power tools, including an angle grinder, concrete drills and crowbars,” the police said.
As well as these images, the police has released an illustration of how they believe the suspects entered the building. 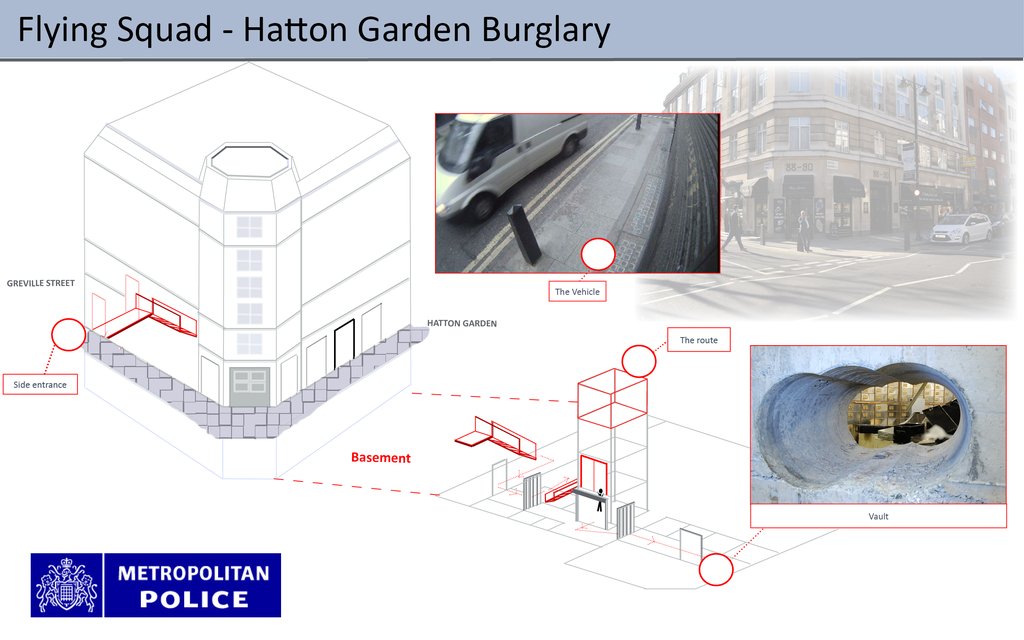 It is thought they were in the vault between 9:20pm on Thursday 2nd April and 8:05am Friday 3rd April, and again between 22:17 on Saturday 4h April and 6:30am on Sunday 5th April.
The crime was not discovered until the following Tuesday because of the long bank holiday. An alarm call was gtriggered on the Friday night but no team was sent out – an issue which the Metropolitan Police is still looking into.
There is no sign of forced entry to the outside of the building. The thieves disabled the communal lift on the second floor and then used the lift shaft to climb down into the basement. They forced open shutter doors into the basement and bored holes into the vault wall.
“The methodical forensic examination of the scene has taken a significant amount of time, using both standard and specialist forensic tactics,” the police said. “The team have recorded, packaged and recovered approximately 400 exhibits, including items for DNA profiling, fingerprints and other evidence.”
There have been no arrests as yet in connection with the investigation.
Detective Superintendent Craig Turner, head of the Flying Squad, said: “We have now completed our forensic examination of the scene. The hours of forensic work and inquiries have been vital in order to ensure we are able to exploit all investigative opportunities to their fullest extent and assist us in identifying those individuals responsible. We appreciate that this situation has been frustrating for those affected by this crime and thank those individuals for their ongoing patience and support.
“Those safety deposit boxes not opened by the thieves during the burglary have been left secured as they were found throughout the examination. HGSD are in the process of making contact with owners to arrange collection of it.
“Of the 72 boxes opened during the burglary, we have only been unable to make contact with six people who we believe have been a victim of crime. We continue to make efforts to trace them. ”
Turner will make an appeal on BBC1 Crimewatch on Thursday 23 April. This will include CCTV images which are already in the public domain.
Share
Tags: NULL