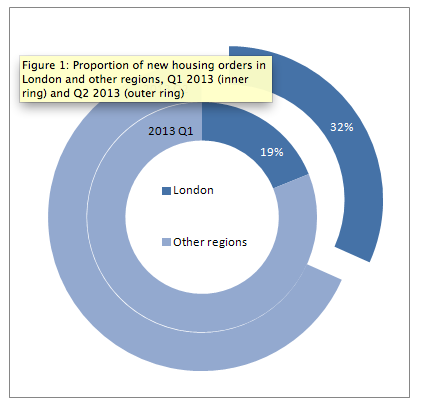 New housing has been one of the biggest areas of growth in the construction industry over the past six months, with orders coming in at the fastest rate since 2007, says the Office for National Statistics (ONS). (Release)

After seasonal adjustments, the value of new housing orders rose by 16 per cent in the private sector, and 31 per cent in the public centre between the first and second quarters of this year, says the ONS.

This isn't output for new housing – which is registered upon completion of properties – rather, it is the growth in the value and volume of orders by construction companies in order to build new housing.

London steamed ahead, with the value of new private sector housing more than tripling between the same periods. The image above shows new housing orders by value in the first quarter of 2013 and the second inside and outside of London. (Note – regional data can be volatile when looking at a quarter. Land availability, for example, can have more of an effect regionally.)

The East Midlands also saw a rise, although the South East saw some falls.