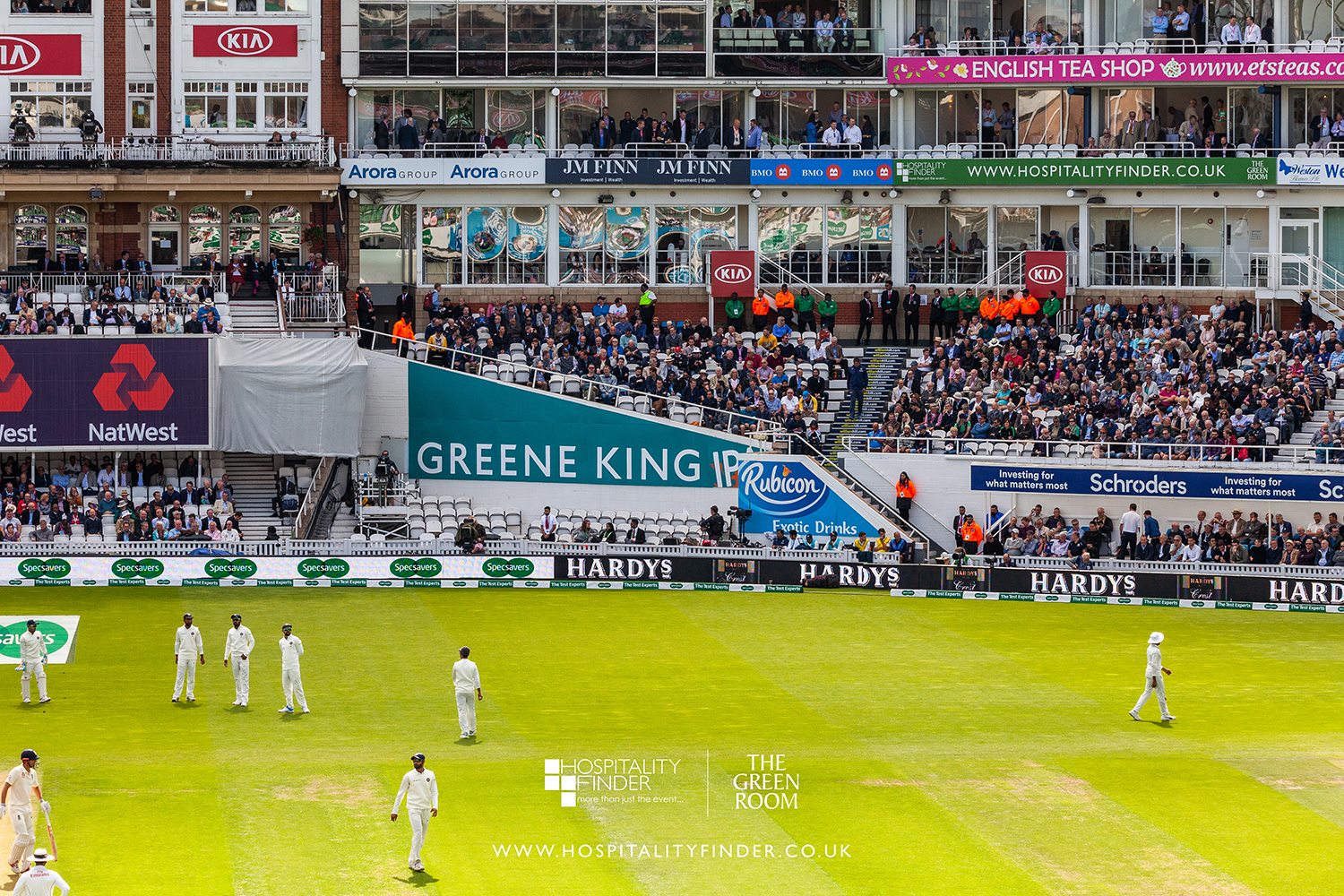 The last time I sat in a corporate box, it was miserable.

A relative who worked for a bank had been offered tickets to a Muse gig at Wembley Stadium and invited me along as box meat to fill the space. At the time, I was a fan of the Devonshire space rockers, but I just couldn’t get into it. Maybe it was the impersonal vastness of the stadium, maybe it was my looming A Level history exam or maybe it just felt inappropriately lairy screaming SUPERMASSIVE BLACK HOLE next to a half empty, besuited crowd who couldn’t care less.

When Hospitality Finder, a Kent-based company that has been organising corporate fun for over 30 years, approached me with a day out experiencing one of their packages at the Kia Oval, I was wary but intrigued. It had to be better than my last outing; it was cricket after all, a gentleman’s game more suited to a besuited audience. On the other hand, cricket is nothing if not a nerd’s sport and I wanted to be in there, rubbing shoulders with the rest of the nerds, not surrounded by insurance brokers wishing they were at the rugby.

It was the 5th day at the test, England vs India, and Alistair Cook’s final international fixture. You know what happened in the game; here is my frontline dispatch from the free bar.

The view from on high

Fresh out of Oval tube, I marched up to one of the security folk and asked where The Green Room was, Hospitality Finder’s official suite at the Kia Oval. The lady tapped her nose and said, “Ooh, you’re in the posh seats.” Instantly, this visit was off to a flying start. Up a flight of stairs and into the room itself, a comfortable if innocuous green-lit space where I was introduced to Amanda, my hostess. She was one of many suspiciously young, attractive ladies wafting around in smart dresses taking people’s drinks orders throughout the day. A bit old fashioned, for my tastes, but, thankfully, everyone was impeccably behaved. 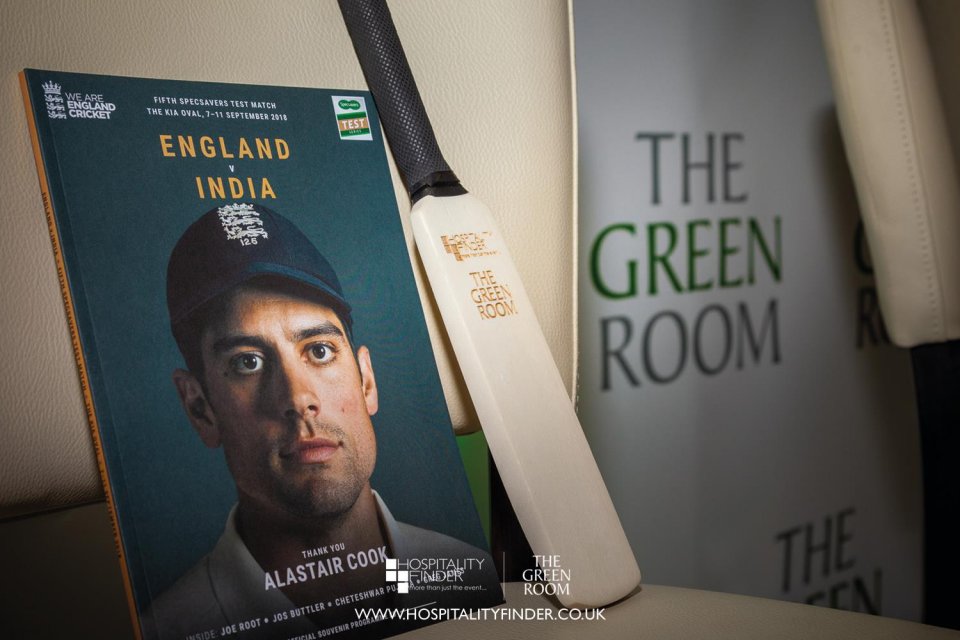 The programme and a souvenir cricket bat

Up another flight of stairs, past the press room from where a delicious curry emanated, and to our reserved seats in the Green Room enclosure, two tiers up, just behind the bowler's arm. You know you’re in good seats when you have to be filtered in and out to the loo and the bar between overs, in case you disrupt play. “This is the most centre-on I’ve ever been,” says one of our neighbours.

Like all good corporate hospitality, The Green Room has a free bar. Champagne, a lager, an IPA, a cider, wine and Pimm’s were on tap all day long. A breakfast of pastries and hot brioche rolls were served – bacon and egg – though they were mysteriously cut in half. There was plenty halves to put an entire roll together, though, as most people seemed to turn up right before the start of play. It is an all day thing, I suppose.

By the end of the first innings, England were up 68-1 and it was time to celebrate with a three course meal stuffed with British comfort classics; smoked salmon to start, lamb and rosemary rump served with heart-stopping buttery fondant potatoes and a raspberry tart with petit fours.

This was followed by afternoon tea only a couple of hours later, but most of the room seemed up for the challenge. Dainty cakes and sandwiches were awaiting our mouths on arrival, and most people scoffed it down in record time to get back to the action.

Apparently, there were some celebrities around. The Green Room draws these starry types in to mingle with their customers to add a frisson of exclusivity to proceedings. I only recognised comedian Jack Whitehall, but I had it on good authority that Mick Jagger was wandering around the day before. The headline-grabber, as usual, was Boris Johnson. The thatched bumbler himself was unmissable in another VIP enclosure opposite ours, but directly in our eyeline. When the Oval’s cameras caught him – twice – we all enjoyed a spot of pantomime booing that made the News at Ten. 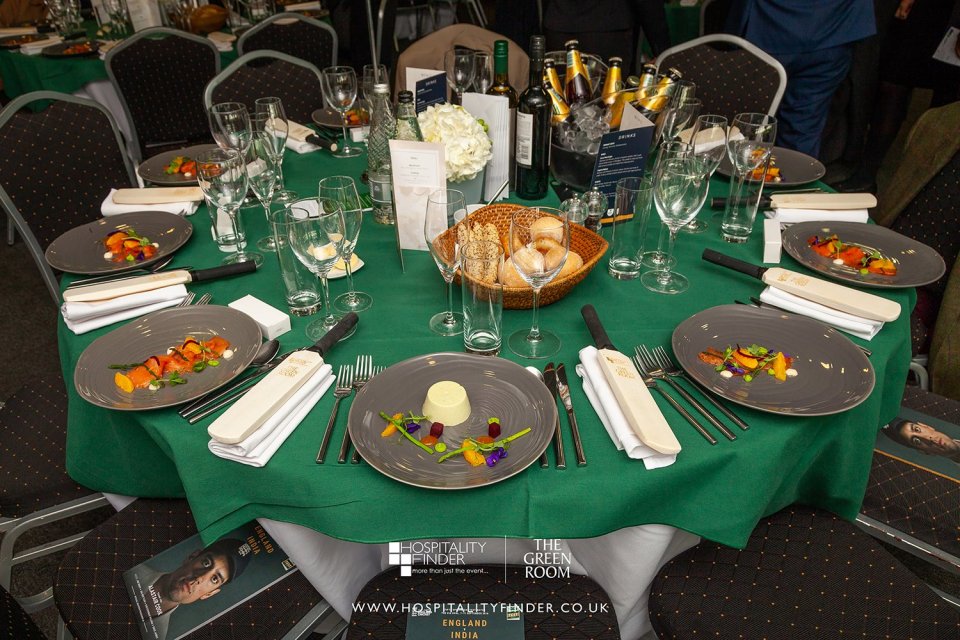 Starters are served in The Green Room

By far the most impressive celebrity additions – and the thing that made the Green Room worth the money in my opinion – were the number of sportsmen available for commentary throughout the day. There was no room for stilted conversation over dinner because we were treated to our very own Match of the Day-style chat at a stage propped up in front of our tables. Hosted by a rambunctious Mark Durden-Smith, the official Green Room compere, he was joined by Hospitality Finder ambassadors Darren Gough and Kevin Pietersen on a panel of England cricket legends that also included Graham Thorpe and Matthew Hoggard. They took questions from the audience, too, turning the Green Room blue with raucous career anecdotes, largely about Geoffrey Boycott. It was definitely worth missing a couple of overs for. Many did exactly that getting them to sign the free programmes and souvenir mini-bats that were thoughtfully scattered around.

The Green Room offering was impeccable, so much so that we missed a couple of sixes and wickets feasting and listening to anecdotes from England cricketing legends. While well remunerated for their time, I’m sure, it was the sportsmen that really elevated the entire experience. We may not have seen Cook score a century on the day, but we got to boo a future Prime Minister and you can’t ask for more than that.

Future Green Room events can be viewed at https://www.corporatehospitality.com/the-green-room starting from £399pp. City A.M. readers can receive a 10 per cent discount off of the Green Room at the Cheltenham Festival. Call 0844 247 8998 and quote #CITYAM