Greece’s golden boy Yanis Varoufakis and his tragic fall from grace. It all started with a misjudged Paris Match photoshoot 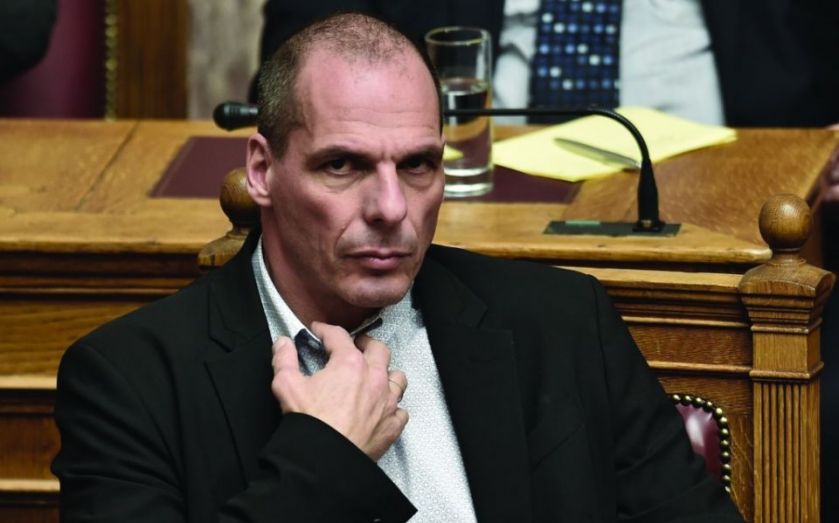 It all began so well for Yanis Varoufakis. When he was thrust into the spotlight in January as the finance minister of a near-bankrupt Greece, the motorcycle-riding academic was acclaimed by media and academics alike as being a new voice for a new era. They dubbed him a rock star economist for his leather jacket and laid-back tieless style.
Despite being a relatively unheard of professor tucked away in the economics department of University of Texas at Austin, he was completely unfazed by the task ahead. He immediately organised meetings with Europe’s leaders to drum up support for his plans to renegotiate the previous government’s bailout package – a sizeable loan granted to Greece so long as the country undertook unpopular reforms.
His plan for debt restructure was even supported by British free market think tank the Adam Smith Institute.
But Varoufakis – who was incredibly popular in Greece, winning one of the largest majorities in the January elections – is starting to stumble.
His fall from PR grace began with a photoshoot in French showbiz magazine Paris Match, in which he posed in a luxurious villa, including pictures at a table with plates of food fit for a king. But many did not think they were fit for a finance minister of a broke country who had made its humanitarian crisis his top priority.
French finance minister Michel Sapin teased Varoufakis for his choice of interview outlet, at the Eurozone finance ministers meeting in Riga on Friday.
“I told him I had read [academic publication] Philosophie Magazine,” Sapin said,  “It’s better than Paris Match,” which is more low brow in style.
Varoufakis also came under fire from his Eurozone partners for the way he was conducting negotiations in Riga.
“All the ministers told him: this can’t go on,” Spain’s finance chief Luis de Guindos said at the weekend. “The feeling among the 18 [finance ministers] was exactly the same.”

Varoufakis did not even join the others for dinner after the meeting. On Sunday he tweeted a quote from former US president Franklin Roosevelt: “They are unanimous in their hate for me; and I welcome their hatred.”
Roosevelt is a major inspiration for Varoufakis, who has made repeated calls for a New Deal style programme of state investment across the currency bloc to revive its economic growth.
“I think Yanis has every reason to welcome the animosity of EU finance ministers who are so fully failing the true functions they should fulfil,” said Varoufakis’ old friend Steve Keen – a professor at London’s Kingston University and author of Debunking Economics.
“When he tries to get them to dispassionately discuss whether the [bailout] programme is succeeding or failing on its own objectives — and it is manifestly failing — they become abusive towards him and accuse him of hectoring.”
Keen points out that when the bailout began it was forecast that Greek unemployment would peak at 16 per cent in 2012. It is now 25 per cent.
“Rather than admitting their programme has failed on its own objectives, they want the Greeks to push their programme even harder.”
One of Varoufakis’ biggest opponents has been German finance minister Wolfgang Schauble, who has been adamant that Greece stick to its bailout programme.
“His [Schauble’s] interpretation of why the crisis began, and what should be done to fix it, is a morality fable rather than reality,” Keen said.
Varoufakis’ struggle in negotiations  has helped the government’s opposition get a foot in the door – they had been silent in the first two months following January’s election defeat.
“He has to resign today to make things easier for [Greek Prime Minister] Mr Tsipras  and to liberate him so that it doesn’t seem that he is being sacked on the orders of people abroad,” said New Democracy MP Dora Bakoyannis, who said Varoufakis was an impediment for Greece.  Bakoyannis is no insignificant critic. From 2006-09 she was the country’s minister of foreign affairs – the highest position ever held by a woman in the cabinet of Greece.
Few would bet on a resignation from Varoufakis, who is actually one of the more moderate members of his party. More likely he will return to prominence once negotiations with the rest of Eurozone finance ministers have reached their conclusion.
Share:
Tags: Greek debt crisis People Yanis Varoufakis