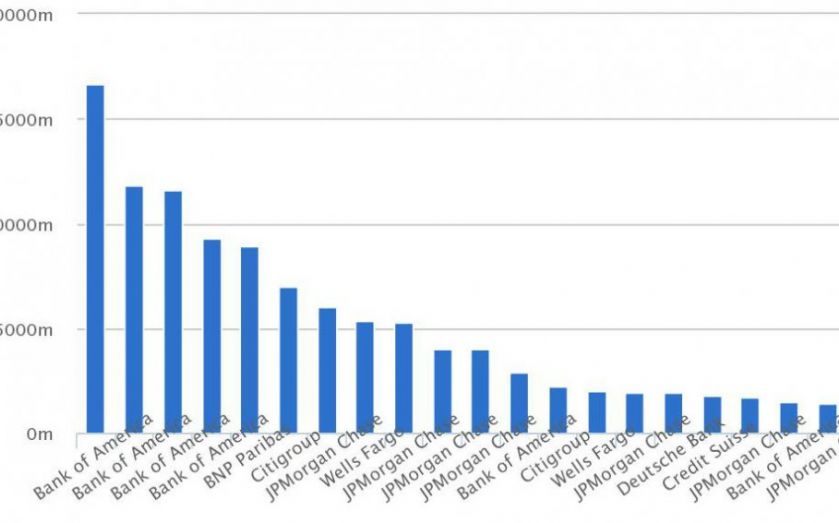 Bank of America’s settlement with the US Department of Justice to pay $16.65bn over the mis-selling of mortgage loans to investors is the largest ever made. Here’s how the numbers stack up.

The figure is the largest payout by any corporation in US history.

The bank is also the previous record holder with an $11.8bn settlement with the US department of Housing over foreclosures agreed in 2012.

In fact, Bank of America has made the four biggest settlements with regulators totalling a whopping £50bn and all related to mortgage-backed securities, repurchases or foreclosures.

Adding in two additional smaller settlements, Bank of America has in total paid out $54bn, more than any other financial institution.

Bank of America has been hardest hit by the fallout from the financial crisis. After rescuing mortgage company Countrywide and investment firm Merrill Lynch it also took on the burden of its alleged bad banking practices, along with its own.

The crack-down by US regulators has resulted in $146bn being paid by banks since 2007, largely for alleged mortgage mis-selling, but also as a result of investigations into money laundering, breaking sanctions and tax evasion.

The eye-watering billion-dollar figure, equivalent to three years of the bank's profits, makes 2014 the costliest year ever for banks – and not just for Bank of America.

The total bill for bank payouts to US regulators this year comes in at $52.5bn, almost half a billion more than 2013.

Chart notes: All data is based on the FT's compilation of bank fine and settlement data from 2007 to present.