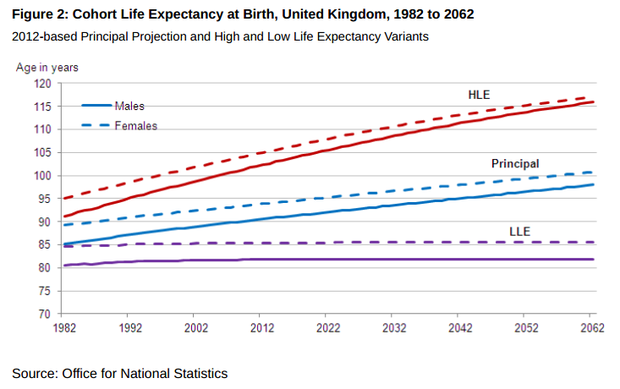 One in three babies born this year could live to see 100, according to new data from the Office for National Statistics (ONS).

Over the last 30 years (1982 to 2012 – the period the ONS was looking at) life expectancy at birth has risen by around eight years for males and six years for females, from 71.1 and 77 years respectively.

But by 2062, 100 will be the life expectancy at birth for females in England, Wales and Northern Ireland – so they're the ones at the top of the graph above. For men it's 98, and for women in Scotland, it's 99.4. So that cohort will be celebrating birthdays into the 2160s.

When it comes to life expectancy for those currently at retirement age, eight per cent of (65 year old) men alive today will live to 100, along with 14 per cent of women.

The ONS says that today, there are around 14,000 centenarians alive in the UK. And life expectancy for children born last year is 79 for males and 82.7 for females.