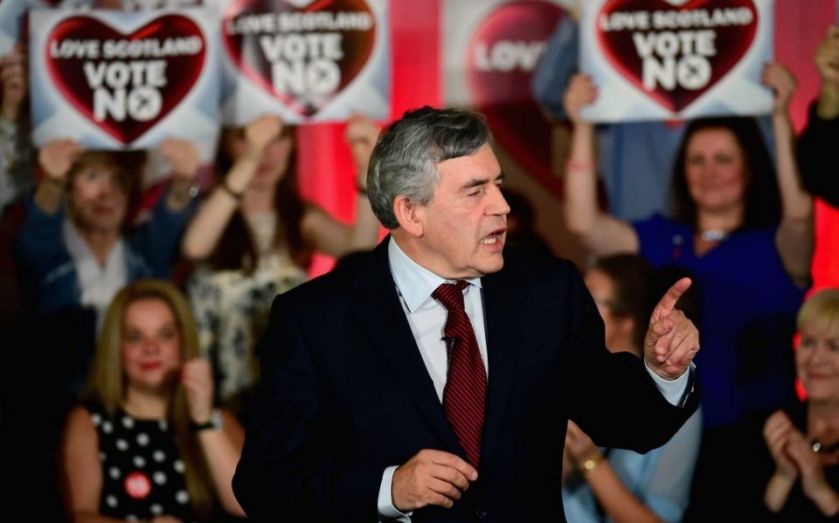 At last, the world is hearing the voices of the real people of Scotland.
The silent majority will be silent no more. And our patriotic vision, proud of our Scottish identity, proud of our distinctive Scottish institutions, proud of the Scottish Parliament that we, not the Nationalist party, created.
And proud, and proud, that with the powers of the Parliament we can guarantee that the National Health Service will be in public hands, universal, free at the point of need, as long and as ever as the people of Scotland want it.
And proud also, and proud also, that we are increasing the powers of that Parliament – faster, safer, better, friendlier change than ever the Nationalists could propose. And proud too that we co-operate and share, indeed we Scots led the way in co-operating, sharing across the United Kingdom – common defence, common currency, common and shared rights from the UK pension to the UK minimum wage, from each according to his ability to contribute, to each according to his needs, and that is the best principle that can govern the life of our country today.
And our patriotic vision up against a nationalist vision that has only one aim in mind: to break every single constitutional and political link with our friends, neighbours and friends in the United Kingdom and we will not have this.
The vote tomorrow, the vote tomorrow, is not about whether Scotland is a nation; we are, yesterday, today, and tomorrow. It’s not about whether there is a Scottish Parliament; we have it, after a referendum ten years ago. It’s not about whether there are increased powers; we are all agreed to increase the powers.
The vote tomorrow is whether you want to break and sever every link and I say let’s keep our UK pension, let’s keep our UK pound, let’s keep our UK passport, let’s keep our UK welfare state.
And let us, and let us tell the undecided, the waverers, those not sure how to vote, let us tell them what we have achieved together.
We fought two world wars together. And there is not a cemetery in Europe that does not have Scots, English, Welsh, and Irish lying side-by-side. And when young men were injured in these wars, they didn’t look to each other and ask whether you were Scots or English, they came to each other’s aid because we were part of a common cause. 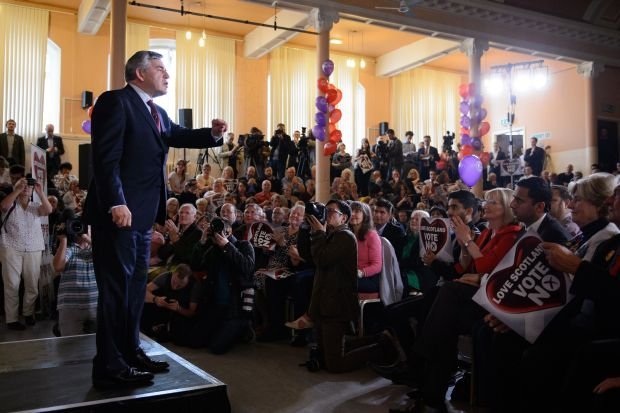 Gordon Brown: We who vote No love Scotland and love our country (Source: Getty Images)

And we not, and we not only, we not only won these wars together, we built the peace together, we built the health service together, we built the welfare state together, we will build the future together.
And what we have built together by sacrificing and sharing, let no narrow nationalism split asunder ever.
And let us tell, and let us tell also those people who have been told unfairly by the nationalists that, if you vote No, you're a less than patriotic Scot. Tell them this is our Scotland. Tell them that Scotland does not belong to the SNP. Scotland does not belong to the Yes campaign. Scotland does not belong to any politician – Mr Salmon, Mr Swinney, me, or any other politician – Scotland belongs to all of us.
And let us, let us, let us tell the nationalists this is not their flag, their country, their culture, their streets. This is everyone’s flag, everyone’s country, everyone's culture and everyone’s street.
And let us tell, and let us tell the people of Scotland that we who vote No, love Scotland and love our country.
The Scotland of the Enlightenment and the Scottish inventors. The Scotland that was the author of the right to work here in Glasgow and the right to free healthcare. The Scotland that helped build the economic laws of this country, the welfare state of this country and contributed to the development of international aid.
And do you know, all these achievements and all the more achievements I can mention, these happened not outside the Union but inside the Union. They happen not in spite of the Union but because of the Union.
And none of us is any less a Scot as a result of it.
And let us tell those people who have still got doubts and are wavering, people who were thinking of voting Yes yesterday but could be persuaded today. Let us tell them about the real risks.
This is not the fear of the unknown, this is now the risks of the known.  An economic minefield where problems could implode at any time. An economic trapdoor down which we go from which we might never escape.
Real risk one: the uncertainty about the currency, unaddressed by the SNP. Real risk two: the default from debt that they threaten, unaddressed by the SNP. Real risk three: having to build 30 billion of reserves at the cost of the NHS and the welfare state, unaddressed by the SNP. Real risk four: prices rising in the shops, unaddressed by the SNP. Real risk five: interest rates and mortgage rates going up, unaddressed by the SNP. Real risk six: a million jobs dependent on our trade and our membership of the UK shipbuilding finance, all the problems unaddressed by the SNP.

Gordon Brown: Tomorrow the vote I will cast is not for me. It is for my children (Source: Getty Images)

And, and, and real risk seven: a massive financial hole that cannot be made up, even a fraction of it, by oil revenues. A massive financial hole that means the risk to the National Health Service does not come from us, it comes from the policies of the Scottish National Party.
But let us, let us tell people, who are aware now of the risk but think somehow Scotland would be somehow more progressive under the Nationalists. Let us tell them of our vision of the future of Scotland, not the Scotland of insults and abuse and threats and recriminations.
The Scotland, the Scotland of Adam Smith and John Smith, the Scotland of civility and compassion, the Scotland of comradeship and community is bigger and better than what we have seen.
Tell them, the people of our vision of the future of Scotland. Yes, a strong Scottish Parliament for fairness, battling for equality across the United Kingdom, but our vision is bigger than that. At every point in every place at every time, particularly through our membership of the United Kingdom, to fight for what is our instinct, what is our dream, what is our demand. A world not of a separate state, but a world of social justice that people can believe in.
And do you know, what sort of message would we in Scotland send out to the rest of the world, we the people who found a way of co-operation across borders, we who pioneered a partnership between nations, we who have stood as a beacon for solidarity and sharing? What kind of message does Scotland send to the world if tomorrow we said we’re going to give up on sharing, we’re going to smash our partnership, we’re going to abandon co-operation and conflict and we’re going to throw the idea of solidarity into the dust? This is not the Scotland I know and recognise and we must make sure it is not the Scotland we become.
Now, tomorrow, tomorrow the vote I will cast is not for me. It is for my children. It is for all of Scotland’s children. It is for our children’s future. And you know, when the SNP says now is the time and now is the moment, and yet the decision is irreversible? Are they not forgetting one thing? That this is not a decision just for this time: this is a decision for all time. This is a decision that cannot be reversed or undone. This is a decision from which there is no going back. This is a decision when once it’s done, it’s done. And so I say I have to vote and take account of the needs of my children and future generations and the future of our country in centuries to come.
And if you have any doubts about unanswered questions, if you have any doubts and doubts that have been unrecognised by the SNP, if you have still problems with what they’re saying, then if you’re thinking of the future of Scotland and if you don’t know, the answer has to be No.
And if you’re, and if you're like me and a million more people who are convinced that the case for co-operation is greater than any case put for separation, then I say to you: hold your heads high. Show dignity and pride. Be confident. Let us have confidence that our values are indeed the values of the majority of the people of Scotland. That our principles of sharing and co-operation are far better and mean more to them than separation and splitting apart. Have confidence that people know that our Scottish Parliament and its new powers give people the powers they need and meet the aspirations of the Scottish people. Have confidence, stand up and be counted tomorrow.
Have confidence, have confidence tomorrow and have confidence enough to say with all our friends: we’ve had no answers. They do not know what they are doing. They are leading us into a trap. Have confidence and say to our friends: for reasons of solidarity, sharing, justice, pride in Scotland, the only answer for Scotland’s sake and for Scotland’s future is vote No.