Google’s new phones are rather good. The Pixel 2 and its bigger brother the Pixel 2 XL (identical in every way but shape, size, price and battery) are straightforwardly excellent.

They are simply the best Android phones ever made. Life-changing, envelope-pushing, they can shift a paradigm from fifty paces. They do your laundry, improve your appearance and resurrect dead pets. If I were forced to imagine a world in which the Pixel 2 did not exist, even for the briefest moment, I would hurl myself into the nearest jet engine and be done with it.

Well, maybe not quite. But Google’s second-generation phone is certainly the best piece of hardware the company’s ever made, the new leading Android handset until the next one comes along, and generally a very nice phone to have in your hand. It’s the Pixel 2 XL that feels like the newer of the two devices. The slick six-incher has received the more radical aesthetic overhaul since the original Pixel. The screen fills more of the device and has slightly rounded corners, a design-aesthetic shared with the iPhone X and Samsung S8, which feels like a throwback to chunky TV screens of the last century. It’s a look I can get behind and a welcome deviation, however slight, from the sharp-edged boxiness that’s dominated phone design for over a decade.

The sleek new look is complemented by the phone’s taller body and thinner profile. Last year, in one of many sideways digs at Apple (and despite consumers not really caring either way) Google loudly denounced the jutting-out-a-smidge camera of the iPhone, and so the original Pixel XL cleverly disguised its own camera bump by tapering almost imperceptibly towards one end. Once you noticed the phone was slightly wedge-shaped however, it robbed the design of some of its tidiness. That you could use it as a doorstop was the Pixel XL’s dirty little secret. The updated Pixel 2 XL makes no such concessions to vanity, and is a far nicer feeling phone for it. It’s 7.9mm thin from top to bottom, barring the jutting-out-a-smidge camera bump of which it is no longer ashamed. 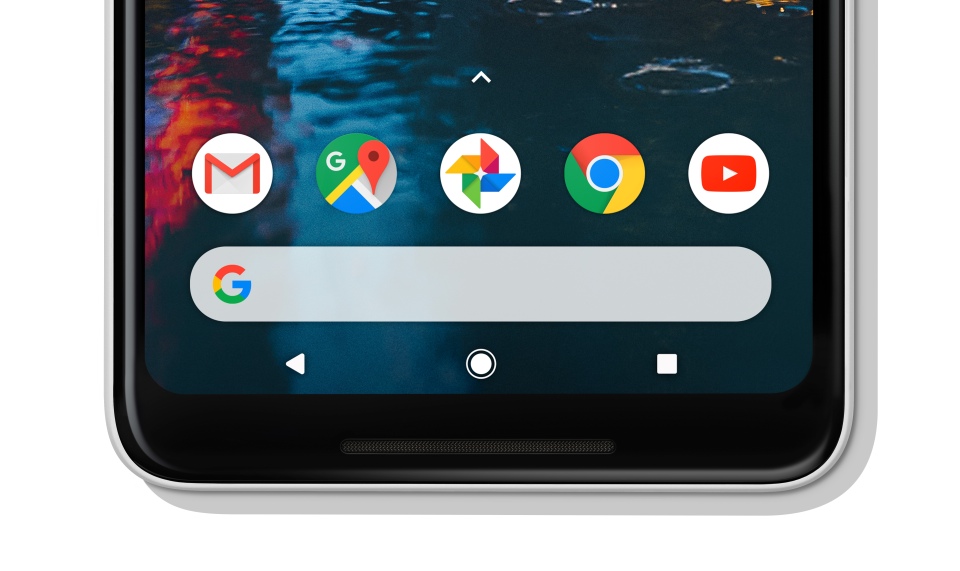 These are small aesthetic changes that, when taken together, make the Pixel 2 feel fresh. There’s a “Pow! I’ve got a new phone” moment each time it comes out of the pocket. The metal back has been given a grippier texture that feels almost plasticky, but is more secure in the hand. The fingerprint scanner has been lowered from the glass portion of the phone’s rear to the metal section, which is not only a neater arrangement to thine eyes, but one that’s far more smudge-averse. The speakers are now front-facing, so the meaty parts of your fat hands don’t muffle the sound when you’re watching cooking videos in bed. If the original Pixel was a launch pad, then Google’s hardware team is now in full flight, and doing the kind of focused, iterative design that brought the iPhone to where it is now. (And not always in a good way – Google has joined Apple in ditching the headphone jack).

The phone runs the purest version of stock Android, as you’d expect, though it’s draped in the new Pixel launcher that gives it a few neat hardware-specific flourishes. The search bar on the home screen now lives nearer to your thumb in the dock, and can search the phone as well the web. The subtly animated aerial photography wallpapers – waves crashing on the beach, tiny cars crawling along the Hawaiian landscape, hot air balloons gliding above a mesa – all accentuate the razor sharp pixel density. And although I still think it’s stupid, the OS can detect when the phone is being squeezed and launch the Google Assistant in response.

The new display produces incredibly deep blacks, the kind that will gaze into thee if you gaze into them for too long

An always-on lock screen displays the time, your notification icons and – if you’re near a speaker playing music – the name of the song that’s playing. This works almost instantly and even when the phone is offline, as the Pixel 2 stores a small, frequently updated database used to identify from a few tens of thousands of songs. It’s a bit of a novelty, but a game-changer if you’re the kind of slow-fingered person who boots up Shazam just as a mystery R Kelly track is fading out.

The vaunted 100,000:1 contrast ratio of the new display produces incredibly deep blacks, the kind that will gaze into thee if you gaze into them for too long, but the trade-off is a less vibrant colour palette thats more’s in line with the iPhone’s naturalistic hues. Samsung’s eye-searingly saturated oranges could accidentally summon a rescue helicopter if used outdoors, but the colour profile of the Pixel 2 goes a little too far in the opposite direction, appearing muted at times and sometimes downright dull. A “vibrant colours” option in Android Oreo spruces things up a tad, but whether trading in some sparkle-jazziness for a smoother and more realistic colour palette is worth it is ultimately a matter for your own eyeballs. 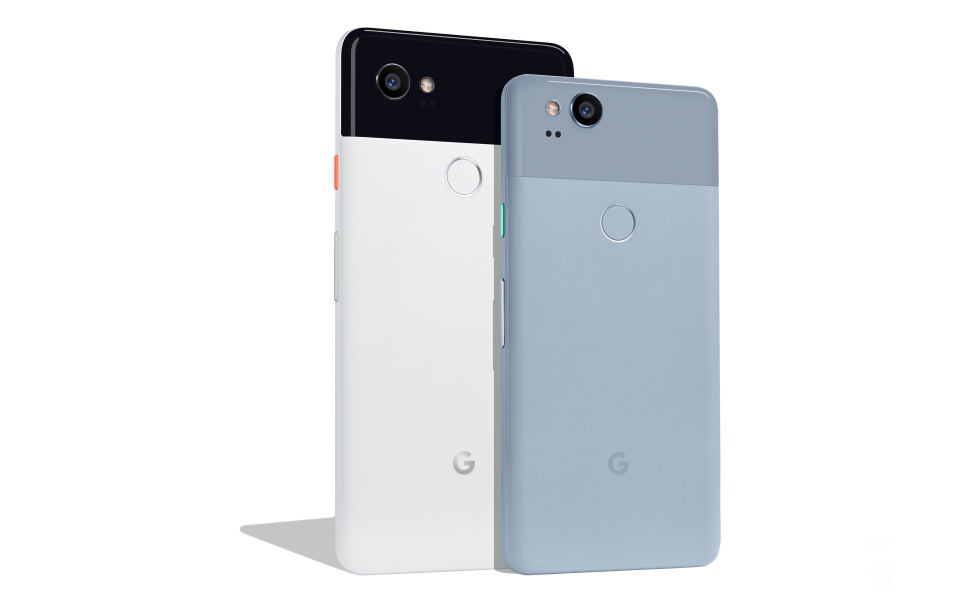 The Pixel 2 XL in black and white, and the Pixel 2 in blue

The rear camera has just one lens, rather than the dual lenses sported by the class-leading cameras in the iPhone 8 Plus and OnePlus 5, though to look at the resulting photographs you really couldn’t tell. The Pixel 2 uses a combination of hardware (it packs adjacent sensor pixels together in such a way that it can emulate a second lens without physically needing one) and software to produce some of the best photos I’ve seen from a phone.

The underlying specs have hardly changed and don’t tell the full story – a 12MP rear camera, f/1.8 aperture, with 8MP and f/2.4 round the front – but it’s how Google handles the mountain of data coming through the sensor that’s really changed. The camera blends multiple exposures instantly to produce balanced HDR images that capture both light and dark areas of the frame. Image stabilisation reduces blurring and produces exceptionally smooth and professional looking videos. And a new portrait mode simulates the depth-of-field effect seen in SLR cameras, blurring backgrounds to make your subject pop from the frame.

Google Assistant can control your home, keep you on top of your schedule, remind you of events, search for and book flights, give directions, call for pizza, reel off trivia, play games, play music, stream to your TV, bark like a dog and plenty more

Google’s taken a leaf from the Apple playbook (of apparently unpatentable ideas), and now records a second of video around each shot that can be replayed later on. Intended to resemble an animated photograph, the resulting footage can appear a little distorted, or abruptly zoomed in. As an entirely software-driven feature, it could improve over time. It’s also worth pointing out that Google provides free cloud storage for all photos and videos taken on Pixel phones, and I can see this feature being interesting five or ten years from now, when static old memories can be brought to life in Harry Potter-esque moving images.

Battery life has improved over the original Pixel, though that’s partly down to it being fresh out of the box. I was going to bed with more than 40 per cent left in reserve, then waking up and grabbing 15 minutes of morning fast-charging that would see me through to the end of the day.

Even with heavy use, it’s unlikely you’ll drop into the redzone on the commute home, though overnight charges will still be the norm. Android’s battery management software has been refined to within an inch of its life and a slew of background features keep things running smoothly, such as automatic and AI-driven controls that prevent juice-sucking apps draining the life from your phone while it’s idle. I doubt there’s a single electron wasted inside the Pixel 2. 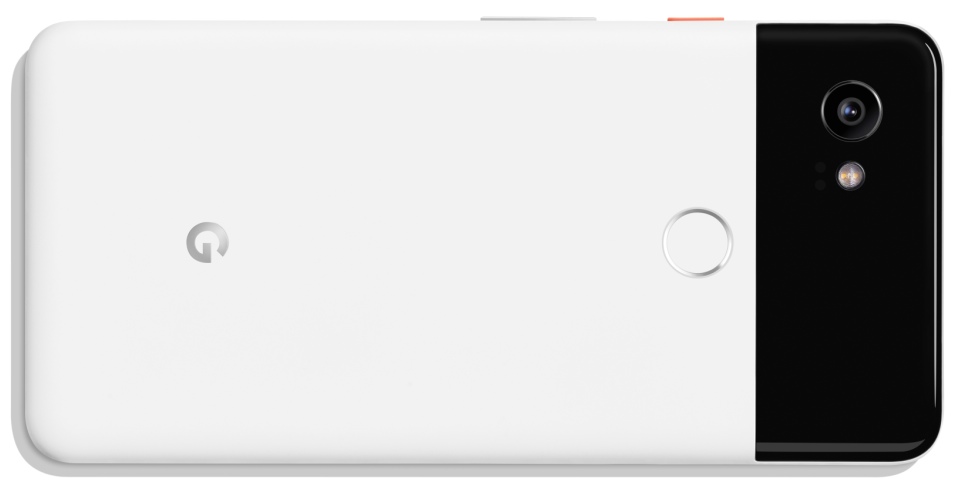 Artificial intelligence, rather than specs, memory and camera lenses, is how Google wants to sell the Pixel 2. And that’s a difficult component to quantify. Google Assistant is at the very core of how the phone works. The best virtual assistant going (a touch more useful than Alexa, and miles ahead of Siri), it can control your home, keep you on top of your schedule, remind you of events, search for and book flights, give directions, call for pizza, reel off trivia, play games, play music, stream to your TV, bark like a dog and plenty more.

A glass-and-aluminium window peering into the golden age of the Google-sphere, curated by a friendly Google Assistant whose intelligence grows exponentially, as the world’s knowledge is slowly subsumed in its entirety into the boundless void of her beautiful and unknowable web-mind.

On a practical level, I find the Pixel 2 XL far better at picking up my voice from across the room than the original Pixel. I can shout out song names while in the kitchen, or ask it to convert two cups to a real measurement, just as I would a Google Home. There’s a new Lens button in the camera too, which plugs your image into Google Assistant’s brain. It’s pretty useless at the moment – show her a pen and she’ll tell you it’s a pen – but Google envisages its users snapping pics of celebrities and being given links to their Instagram pages, or photographing Big Ben to learn about how the cessation of its bongs upset weird Tory backbenchers.

Machine learning and small, on-going improvements are part of the Pixel 2’s longer term appeal, and the reason why Google is downplaying straight hardware specs in favour of talking up their software and artificial intelligence. Now more than ever, the Pixel is less a phone and more a glossy conduit to the expanding Google-verse. A glass-and-aluminium window peering into the golden age of the Google-sphere, curated by a friendly Google Assistant whose intelligence grows exponentially, as the world’s knowledge is slowly subsumed in its entirety into the boundless void of her beautiful and unknowable web-mind.

I’m on board with that. I wouldn’t hurl myself into a jet engine or feed my legs into a thresher to prove it, but the Pixel 2 XL is absolutely the best Android phone ever made.