How to fix the crisis: Germany must allow Greeks a New Deal 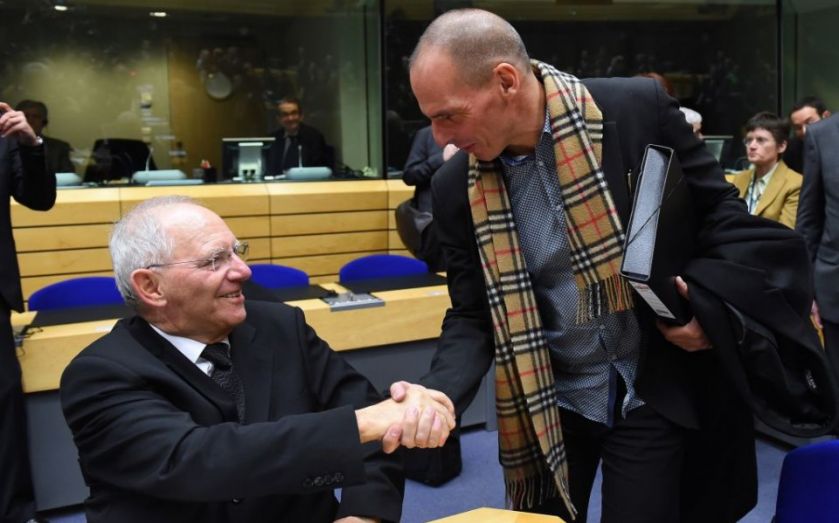 My friend and colleague Yanis Varoufakis was left with near to nil support for his pro­posals at Monday’s crucial meeting with other Eurozone finance ministers.
Before the week is over there may be another head-to-head with his German counterpart, Wolfgang Schauble – but if talks break down again, it could lead to a so-called Grexit (Greece leaving the euro area) and risk of serial disintegration of the Eurozone.
Both of these outcomes are readily avoidable.
One reason for the stand-off is that Schauble and Chancellor Angela Merkel assume that Varoufakis’ proposals would have to be funded by German taxpayers – an assumption that is entirely wrong. Another reason is what some people have called the German leaders’ pathological obsession with debt – not helped by the fact that the word for it in German, schuld, also means guilt.
However, what Varoufakis and I have explained in The Modest Proposal (our book on the subject) is that Europe already has the financial institutions that could resolve not only the Greek crisis but also the Eurozone recession – with the correct use of bonds. Specifically, Europe could utilise fixed-interest borrowing such as that by which President Roosevelt financed recovery of the US from the 1929 crash and slump.
Roosevelt did so by using US Treasury bonds to shift surplus savings into social and environmental investments, such as the Tennessee Valley project for the US deep south. Europe could now do the same without increasing deficits – not least since Roosevelt’s original New Deal did so with an average budget deficit until the onset of WW2 of just three per cent – which, by happy coincidence, is the Maastricht budget deficit limit.

The institutions for Europe to achieve a similar New Deal already exist. One is the European Investment Bank, more than three times the scale of the World Bank in terms of lending for investment, and whose lending does not count on the national debt of EU member states, including Britain.
Another is the European Investment Fund, which can issue eurobonds that could recycle uninvested global surpluses.
The BricS nations made it clear in September last year that they would provide funding if it went towards an investment-led European recovery rather than simply a reduction in debt. The best way to escape the current problems is through investment and growth – not choking off any recovery. As the second Clinton administration showed, growth is the best means of achieving debt and deficit reduction.
Share
Tags: Greek debt crisis