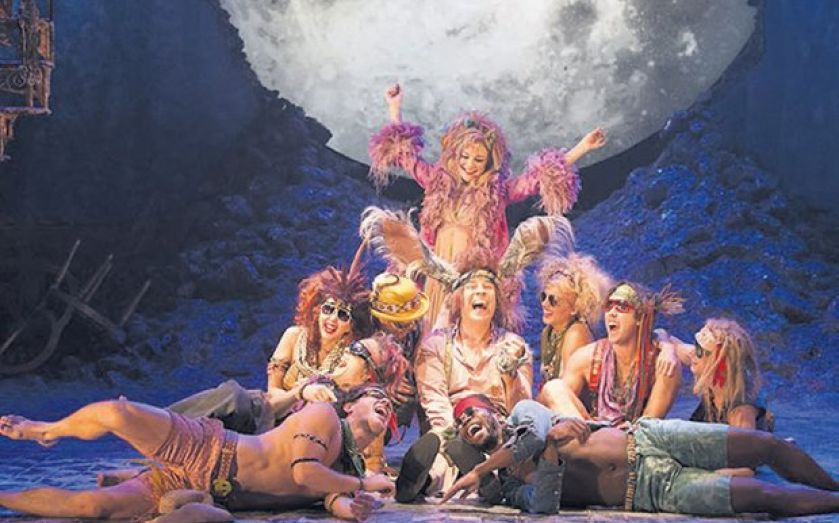 THE Michael Grandage Company turns to Shakespeare with A Midsummer Night’s Dream, the fourth in a series of productions. The play, which has suffered a history of hackneyed interpretations, is given a contemporary twist in Grandage’s hands, set in the hedonistic limbo of the Nevadan desert’s Burning Man Festival. Here, fairies are re-imagined as revellers, while Oberon’s elixir for love is administered as a tab of acid. The festival context fosters the play’s themes of emotional confusion, of passion, mischief and merriment, and the set itself, in which a giant moon illuminates a stage full of dismantled furnishings and dancing sprites, compliments the action with suitably transgressive surroundings.

While the fairies work well as hippies and Sheridan Smith shines as a promiscuous and giggly Titania, the four lovers (Susannah Fielding as Hermia, Katherine Kingsley as Helena, Stefano Braschi as Demetrius and Sam Swainsbury as Lysander) are especially noteworthy. Their descent into half-naked demonstrations of machismo from the men and bewilderment from the tormented objects of their affection is both comic and compelling.

The interchange between these four is a source of much amusement, but they have to compete for attention with David Walliams. The Little Britain star hasn’t looked far for the characterisation of his camp and histrionic Bottom – it’s an evident hangover from his TV-show sketches. His turn is entertaining but the prominence the part of Bottom enjoys in this production is not entirely convincing, or necessary.

The play makes for a fast-paced and enjoyable two hours (and twenty minutes), in which problems are overcome almost as quickly as they arise. Yet it was disappointing not to discover among the high spirits and spliff-smoking a hint of the depth that can be found in Shakespeare’s script. What of Hermia’s death sentence from her father at the play’s start? Or Helena’s pathos-filled plea with Demetrius to “spurn [her], strike [her],/ Neglect [her], lose [her]” as long as she can follow him? These are overlooked, engulfed in the manic hilarity of it all. The troupe of Athenian actors wrongly reconfigure Pyramus and Thisbe’s plight as a comedy, and, while Grandage does not make anywhere near as grave a misreading as this as others have, we can lament the comparable absence of any grit in his production.

Coupled with the ecstasy of drug-taking in every fairy scene, the insistent humour lends the play an inconsequential feel, giving credence to Puck’s closing suggestion to consider the performance merely a “weak and idle theme,/ No more yielding but a dream”. This Dream entertains, despite its lack of layers, offering an accessible and unchallenging reading of the work. Look to the company’s forthcoming production of Henry V for meatier themes; this is simply a spectacle which, loyal to its festival setting, reels agreeably towards a happy ending.