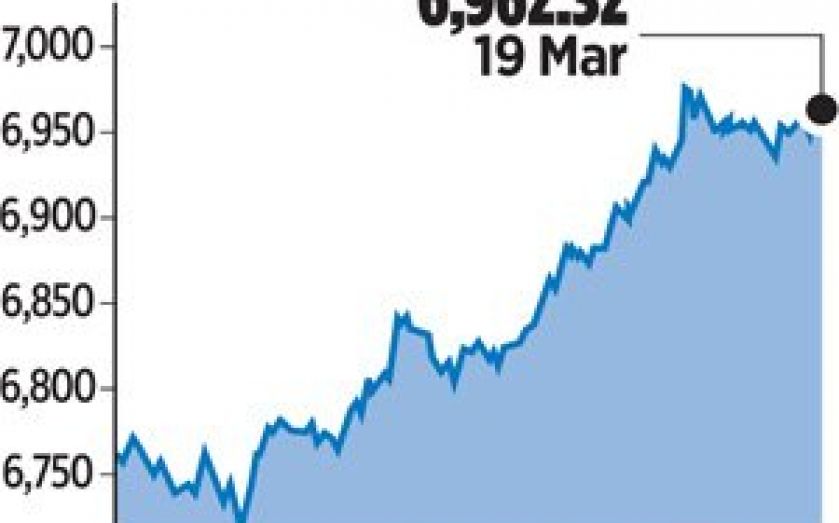 BRITAIN’S benchmark share index touched record highs yesterday, with gold miners outperforming, after the US Federal Reserve and Bank of England both dampened prospects of interest rate rises in the near term.

Traders said the FTSE was supported by dovish comments from Bank of England official Andy Haldane, as well as Wednesday’s pre-General Election Budget, where chancellor George Osborne announced modest increases in the forecasts for Britain’s 2015 and 2016 economic growth.

Oil companies rose on the news on Wednesday that Osborne was introducing tax cuts for the industry and continued to climb yesterday with shares of BP up 1.1 per cent, Royal Dutch Shell one per cent higher and BG Group gaining 1.3 per cent.

The mining companies benefited from an increase in gold prices after the Fed statement.

The Fed’s cautious tone pushed the US dollar down on currency markets, making gold more attractive.

Other movers in London included AstraZeneca, which rose 0.8 per cent after the drug maker said it will partner with the US unit of Daiichi Sankyo to launch constipation drug Movantik in America early next month.

However, clothing retailer Next fell four per cent after the company’s cautious outlook undercut a 12.5 per cent rise in annual profits. The stock rose to a record high on Wednesday.

BESI Research analysts kept a “sell” rating on Next, but others remained upbeat about the retailer’s prospects.

Credit Suisse said Next’s comments about its sales budgets and collections “is a surprise” as it had only “expected the tone of the outlook statement to be somewhat muted in terms of the UK macro outlook, but not on execution.” The broker said it remains “neutral” on Next.