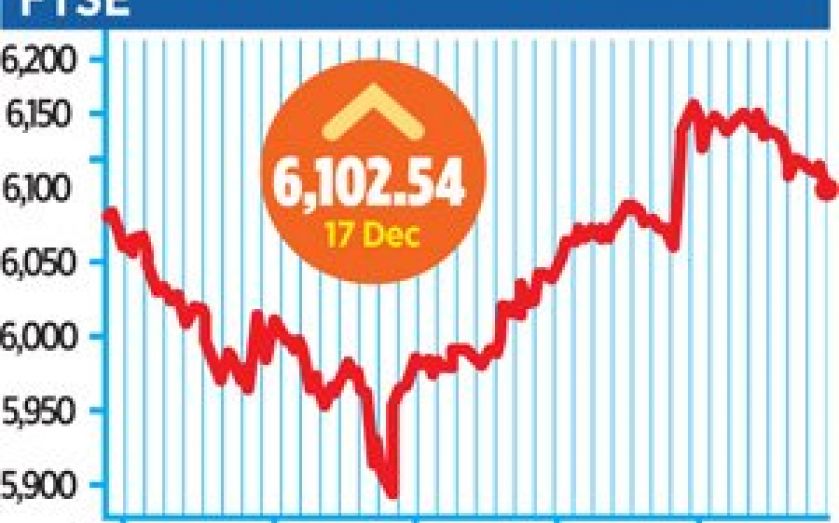 TOP SHARE index, the FTSE 100, climbed yesterday, tracking gains on other equity markets after investors took the first US interest rate rise in nearly a decade as a sign of policymakers’ confidence in the world’s biggest economy.

Standard Chartered led the market higher, up 7.3 per cent, though the emerging market- exposed lender remained down 40 per cent for the year.

HSBC Holdings was up 2.2 per cent, while Royal Bank of Scotland Group ended up 1.7 per cent.

Healthcare stocks including AstraZeneca and Shire rose after AstraZeneca’s decision to buy 55 per cent of Acerta Pharma highlighted the extent of takeover activity within the industry, which has boosted health stocks this year.

South Africa-exposed stocks continued to rally, with Old Mutual, Investec and Mondi all up between five and 12 per cent so far this week after the appointment of a new finance minister lifted the South African rand from a record low.

The US rate hike pushed down the price of gold and other metals; a stronger dollar makes commodities that are priced in the currency more expensive for buyers using other currencies. That in turn weighed on shares in gold miners such as Fresnillo, down 2.8 per cent, and Randgold, down 3.7 per cent. Other miners also ended in the red, with Anglo American down 0.3 per cent, Glencore down one per cent and Rio Tinto down 1.8 per cent.

Housebuilders also struggled, with shares in Taylor Wimpey, Persimmon, and Barratt Development all roughly flat over the day.

Away from the blue-chips, and FTSE 250 fast food firm, Domino’s Pizza rose 5.6 per cent, after Berenberg upgraded it to a “buy” rating from “hold”.

Entertainment One closed up 3.2 per cent after the Peppa Pig owner formed a partnership with director Steven Spielberg.

The decision in the US to raise rates has led investors to ask when the Bank of England will follow suit and push rates up from their current record low of 0.5 per cent.