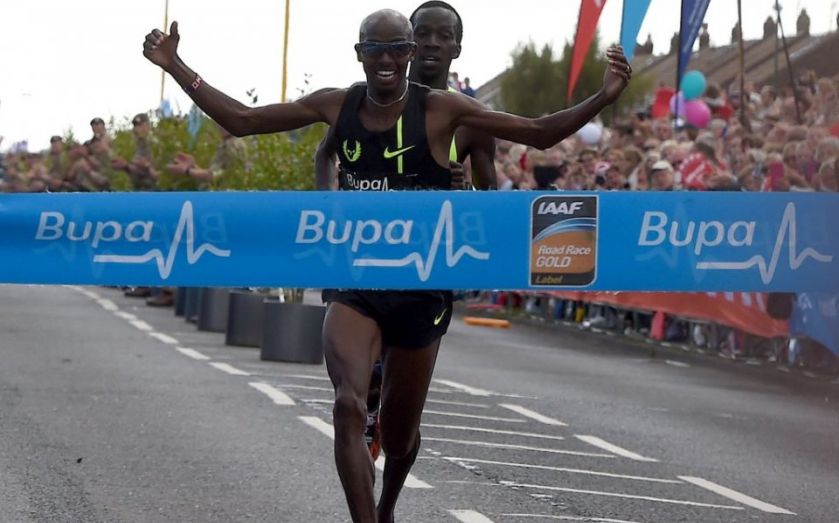 When we were runners, people used to laugh at you and shout at you in the streets and stuff,” chuckles Brendan Foster. “In a hotel you’d walk out the back door rather than the front to go for a run. People didn’t do it.” Decades later, it seems fair to say he has had the last laugh.
Read more: The best parks for running in London
Perhaps best known for a track career that gleaned Commonwealth Games and European Championship gold medals, or his regular broadcasting stints with the BBC, Foster, now 67, is also a successful businessman whose disarming affability belies a sharp entrepreneurial streak.
He devised the Great North Run, the Tyneside half-marathon which started in 1981 and is now the biggest event of its kind in Britain. That spawned  a portfolio of mass-participation races which now numbers more than 20 and encompasses not just running but also swimming and cycling.
Foster’s next project is the Great Newham London Run, a 10K through the Olympic Park and finishing on the history-soaked London 2012 track that takes place for the first time this month. By 2020 he hopes it will boast 60,000 entrants, eclipsing the London Marathon and Great North Run.
“We all know the Great North Run, which is the biggest, and we also know the Great Manchester Run, which is the third biggest after the London Marathon, and we also organise the Great Birmingham Run and the Great Scottish Run, which are the next,” he says.

“In the first Great North Run we had 11,000 runners. In the Great Newham London Run we’ve got 15,000-plus, so it’s bigger earlier on than the Great Northern Run ever was. Whether we get there or not doesn’t really matter; it’s the journey to try get there that matters.”
Foster – one of eight early shareholders in Nova International, which rebranded as The Great Run Company this year – appears to place more faith in the intrinsic appeal of pulling on a pair of trainers and racing with friends than a sophisticated marketing strategy.
“Anybody can go out for a run and that’s what we encourage but at the end of the day when you run together with people you run better, it’s more fun, it’s more memorable, you can measure it, and you can get the experience,” he says.
He is not above using technological flourishes to enhance the experience, however, with Great Newham London runners set to be greeted by the Chariots Of Fire music and historic audio commentary from the London 2012 Games as they enter the Olympic Stadium for the final 300m.
Read more: Farah denied in thrilling finale to Great North Run
“We get a terrific reaction to that,” he adds. “We’re just trying to make an experience, and crossing the finish line where Usain Bolt crossed the finish line and doing his signal or Mo Farah’s signal is kind of living a dream. People enjoy it and want to come back and do it again.
“It’s the only sport where you can take part with the best in the world. You can’t go to Wimbledon and play against Andy Murray, but if you want to you can run next to Mo Farah – if you’re quick enough.”

The Great Newham London Run is just the beginning of Foster’s plans for the Olympic Park. He wants to graft on additional events at the park’s other venues, such as the velodrome, Copper Box and Aquatics Centre, creating “a multi-sport festival” and a “Disneyland of sport”.
Foster is convinced that “the future of sport is about participation”. He is in talks with fellow Team GB alumnus Daley Thompson about a multi-disciplinary race, and has beefed up the boardroom by hiring Mirror Group executive Mark Hollinshead to be the company’s new CEO.
With his eighth decade in sight and enough achievements to populate three careers, he might be entitled to put his feet up. The idea elicits another of his hearty, gurgly  County Durham laughs.
Read more: The best running apps to use with your Apple Watch
“Hang on, I’ll just put my feet up – on the desk,” he chortles, before revisiting his days of being mocked for going out jogging.
“Back then we always thought running was great and we used to encourage people to do it. Now we do it on a large scale.
“I love running, love to see people running, love mass participation running, I love elite athletics. I love to see those of pictures of thousands of people running streaming out of the Olympic Park or the enjoyment on the finish line when the guy who two minutes thinks he is Mo Farah. It’s what I love to do.”
The Morrisons Great Newham London Run takes place in the Olympic Stadium on Sunday 19 July. To take part, visit www.greatrun.org
Share
Tags: NULL