Former Wework cleaners take to the streets to protest dismissals 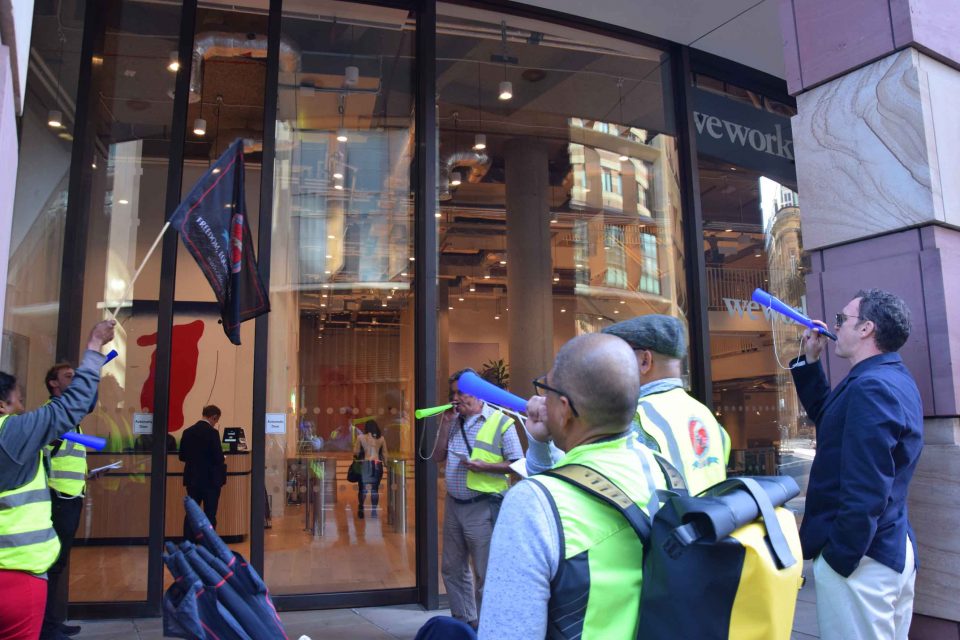 Former Wework cleaning staff staged a protest outside one of the office space provider’s locations in the City today over what they have called the “unfair dismissal” of several employees.

Some of the cleaners, alongside union staff and supporters, gathered outside Wework’s branch at No.1 Poultry in the City to protest the dismissals.

Demonstrators played sirens through a speaker system, waved flags and handed out flyers to Wework tenants and passing members of the public.

The Cleaners and Allied Independent Workers Union (CAIWU), which organised the protest, said that five staff employed by subcontractor CCM to clean Wework offices across London had been dismissed without proper processes being followed. The union said one cleaner had subsequently been reinstated.

Bruce Coker, a CAIWU staff member, told City A.M. there had been “a failure of process in many of the dismissals.”

“No allegations were upheld or proper evidence produced,” he said.

Coker said that, as is common in outsourcing arrangements, the contract between CCM and Wework allows Wework to demand the removal of any individual from their sites.

Although this does not constitute a dismissal, it is then the responsibility of the subcontractor to provide suitable alternative employment. Coker said this often does not happen, calling the system “a way of dismissing workers by the back door.”

“If there’s somebody you want to get rid of, you can do it by use of this contractual arrangement and avoid the type of employment protections in place to ensure that unfair dismissals can’t take place,” he said.

Wework declined to comment on any of the allegations set out in this story.

A CCM spokesperson said: “We take matters of this nature very seriously and we have fully investigated these concerns about workplace performance and misconduct.

“Of the four individuals, two were offered alternative employment, which was declined in both cases. The two other cases resulted in dismissals, which were both upheld at appeal.”

Julian Ortiz, one of the dismissed cleaners, told City A.M. he had lost his job without CCM conducting “a proper investigation”.

Ortiz was accused of having stolen a projector from the Wework office where he worked, but says he had been given permission to borrow it by security staff. Ortiz says he was told by CCM that Wework did not want him working in their offices any longer.

“CCM has been dismissing people without proper investigations,” he said. “The only excuse they have is the client. They say ‘Wework don’t want you, Wework don’t accept you being here’.”

Ortiz said he wanted Wework to make their cleaning staff “a proper part” of their team. “It doesn’t matter that we are subcontractors, we are part of the family,” he said.

Another demonstrator, Jose Toledo, a night cleaner for another contractor, said he had joined the protests to “show solidarity”.

Speaking to City A.M. via a translator, Toledo said the dismissals were “not right”, and called for his “fellow workers to be reinstated”.