FALLING petrol prices helped push inflation down to 2.2 per cent in the year to October, the slowest pace in a year, official figures showed yesterday.

But that is still above the Bank of England’s two per cent target and means prices are still increasing more quickly than average wages.

Inflation eased off – down from 2.7 per cent in the year to September – because of falling fuel prices and because last year’s hike in university tuition fees had a weaker impact.

The increase in the cost of living on the Retail Price Index (RPI) slowed from 3.2 per cent to 2.6 per cent.

That still far outstrips the increase in average wages of just 0.7 per cent in the year to August, the most recent figures available. Prices have outstripped wages for the last three years. 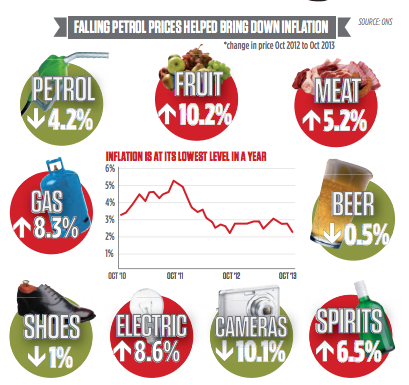 And analysts expect inflation could be pushed up thanks to energy companies hiking bills.

“Utility price hikes will stop inflation from falling much further in the next few months,” said Robert Wood from Berenberg Bank. “But with productivity improving and sterling higher, inflation should fall towards the Bank of England’s target through next year easing the squeeze on people’s pay. It is not impossible that real wages begin rising again by the middle of next year.”

The fall in inflation also knocked the value of sterling, because markets believe if inflation stays below the Bank of England’s forecasts, it could mean policymakers keeping interest rates low for longer. Sterling dropped 0.72 per cent against the euro.