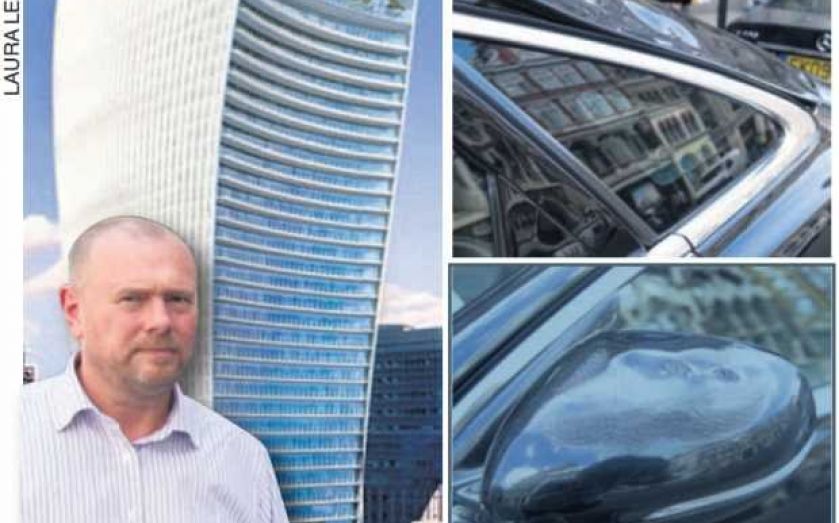 THE WALKIE Talkie skyscraper in the City has caused extensive damage to a Jaguar parked on a nearby street – as other drivers come forward to say it has also melted parts of their vehicles.

As revealed in City A.M. last week, the building’s unusual shape is reflecting an ultra bright light onto Eastcheap, with those unlucky enough to park below finding the beam is causing serious damage.

Martin Lindsay, director of a tiling company, said he was distraught to see the warped panels along the side of his high-spec Jaguar XJ.

He said: “They’re going to have to think of something. I’m gutted. How can they let this continue?”

He parked his Jaguar at 12.45pm on Thursday afternoon but when City A.M. visited an hour later there was a smell of burning plastic and some panels were beyond repair.

The building – dubbed the Walkie Scorchie after it began reflecting the ray of light that has left passers-by shielding their eyes – has also badly damaged a van parked nearby.

Eddie Cannon, a heating and air conditioning engineer, said his Vauxhall Vevaro had suffered similar damage on Wednesday: "The van looks a total mess – every bit of plastic on the left hand side and everything on the dashboard has melted, including a bottle of Lucozade that looks like it has been baked."

"When I got in the van it was a really strange light – like it was illuminated and they were filming. I want to know what effect it's having on people walking down the road."

Joint developers Land Securities and Canary Wharf said they are investigating, adding: “As a precautionary measure, the City of London has agreed to suspend three parking bays in the area which may be affected.”

Have you been affected by the Walkie Scorchie's light beam? Email james.waterson@cityam.com.