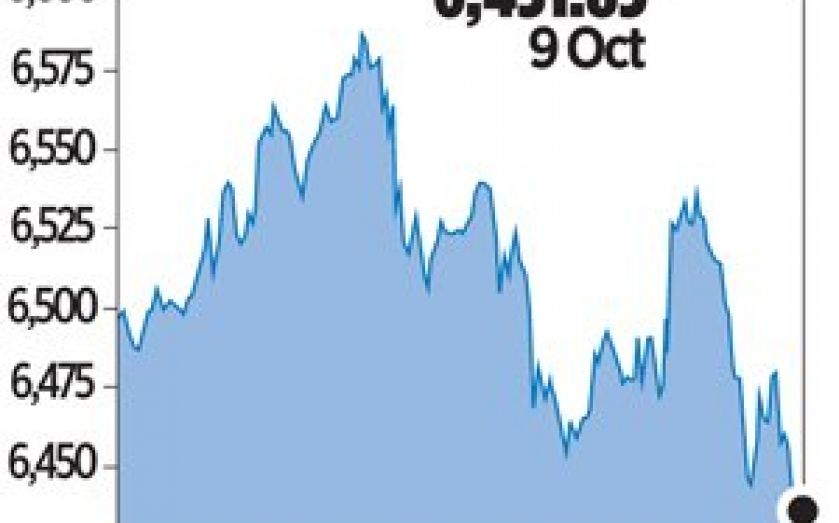 THE FTSE 100 yesterday hit its lowest level for a year after early gains fell away in a broad-based sell-off as investors became anxious about signs of serious weaken­ing in the Eurozone economy.

Mobile telecommunications group Vodafone was among top fallers, down 3.4 per cent to after investment bank Nomura cut its rating on the stock to “reduce” from “neutral”, arguing that the company could be affected by greater competition within its sector.

Growing concern over the impact of the deadly Ebola virus on travel and tourism saw easyJet lose another 2.69 per cent to 1,341p, while Tui Travel fell 2.75 per cent to 356.90p. British Airways and Iberia owner Inter­national Airlines Group fell three per cent to 333p.

However metal prices moved higher as the dollar weakened following the suggestion that the Federal Reserve would not raise interest rates prematurely.

Mexican precious metals miner Fresnillo was up 6.43 per cent to 770p and Randgold Resources rose 6.12 per cent to 4,298p. Rio Tinto rose 2.14 per cent to 3,053p after Credit Suisse suggested that Glencore, down 1.5 per cent at 321.75p, could come back for another run at the iron ore specialist when it was allowed to do so in six months under UK takeover rules.

Associated British Foods – owner of British Sugar, Jordans & Ryvita and Primark – fell 0.47 per cent to 2,553p after Germany’s Suedzucker said the European sugar and ethanol markets had continued to deteriorate.

Among the mid-caps, Hays was 2.25 per cent higher at 122.70p after the recruitment group reported an underlying nine per cent rise in first-quarter fees, following strong demand in Britain, Australia and Germany.

British plus-size clothing retailer N Brown Group saw its shares tumble 13.27 per cent to 302p – their lowest for two years – after cutting its full-year profit forecast just three weeks after saying it was on track to meet its guidance.