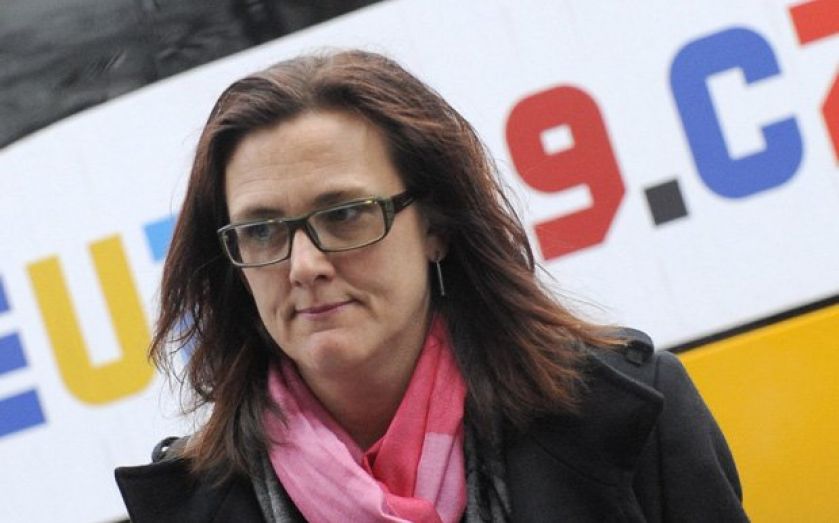 THE CRUCIAL free trade agreement currently being negotiated between the US and the EU (colloquially known as “TTIP”) has become the focus of much public scrutiny – even hostility – in recent months. So David Cameron is absolutely right to push TTIP higher up the EU’s agenda at the European summit this week. The talented new EU trade commissioner Cecilia Malmstrom will be glad to have an ally like the UK leading from the front.

Because of the mammoth size of the free trade zone which TTIP would create, and the fact that the negotiations themselves, as with all trade deals, take place behind closed doors, it is easy for a web of disinformation to be spun about what wildly hypothetical consequences it could have. But those responsible for this scaremongering could succeed in not just severely weakening TTIP, but killing it altogether.

In one sense, TTIP is broadly running at normal pace. After all, it took nearly five years to wrap up the free trade deal between the EU and Canada. But with the combination of latent anti-Americanism in Europe following the NSA spying revelations, and the inward-looking populist protectionism that has accompanied economic recession, the danger of TTIP failing is real.

The EU is struggling as it is to prove to the world that it’s serious about being outwards-looking and competitive. Its crisis of investment, and the European Commission’s plan to try and revive it, is one of the big talking points at this week’s summit. Yet TTIP could help spur on investment from across the Atlantic by making it easier for US companies to invest in the EU, bringing with it much-needed jobs for British and European workers.

To be unable to do a deal with its biggest ally and trading partner would have significant implications for Europe’s political and economic security, and for the West’s more generally. Standard-setting in trade would fall to our global competitors, and the EU’s status as a significant leveraging bloc would be called into question. So there is an urgent need to get back to basics on TTIP, to explain at a fundamental and practical level why it, and free trade more generally, is important.

The call for transparency on the deal seems to have become the prerogative of trade unions and NGOs, but it is equally important for business, particularly small and medium-sized enterprises (SMEs). The interests of SMEs have at times become lost in the debate, the parameters of which tend to paint the only winners of TTIP as multinational corporations. But it is SMEs who face the biggest difficulties in exporting to – and doing business in – the US, and who therefore stand to gain the most from TTIP.

Some quarters tend to dismiss these export challenges as overstated, given that the US is already a leading exporting destination for British firms. But for smaller businesses, the costs associated with the tariffs that do remain, alongside the red tape of regulatory compliance, can be prohibitively expensive. On textiles, for example, US import duties reach as high as 40 per cent, nearly double the upper limit of China’s tariff level.

In talking about regulatory barriers to trade, there is a pressing need to explain in concrete terms how TTIP is not about deregulating. It means removing the need for duplicate inspections, and recognising each other’s technical standards where there is scope to do so, to cut down on the cost of implementation and enforcement requirements.

As so often happens with regulatory challenges, big businesses can and do adapt to these compliance headaches – they often have entire departments devoted to dealing with them. SMEs, by contrast, do not have the same resources to offset these overhead costs, to the point where it can be a factor in deciding not to export.

But the salience of TTIP as an issue is still relatively low on the radar of most UK SMEs. Given the degree to which smaller businesses are often part of complex global supply chains, this is not altogether surprising. Large shipping and logistics companies, which deal with the practical side of exporting, are more likely to be wise to the negotiations than a small firm adding value to a product and moving it on to the next stage in the supply chain. But the costs incurred at the border through custom and inspection procedures have an impact as far back as the product design step.

So it is imperative that, when politicians and trade negotiators talk about the benefits which business stands to gain from TTIP, they focus as much – if not more – on SMEs. Given that they are the much-heralded backbone of the economy, and that only around a quarter of SMEs currently export, the potential TTIP could offer them needs to be more of a focal point in the public discussion around the agreement.

To this end, more attention on the components of the Small Business Chapter in TTIP, as well as increased transparency around some of the initial sectoral negotiating aims, is needed to ensure businesses of all shapes and sizes are attuned to the relevance and importance of this trade agreement. Without it, a significant base of support for TTIP could remain switched off.