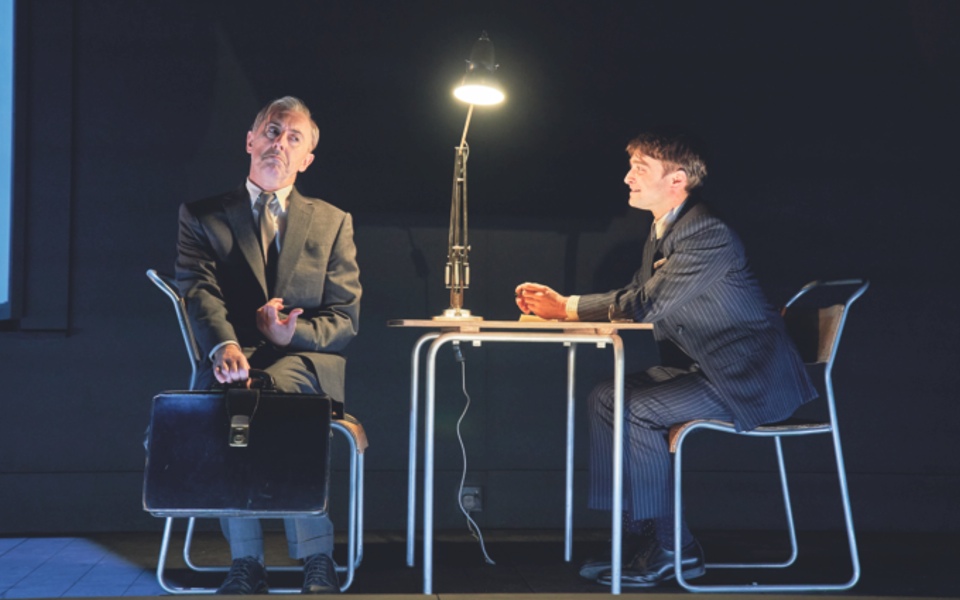 There was a club night in Glasgow in the early 2000s called Optimo, which occasionally used the slogan: “You won’t like it, sugar” (taken from the lyrics of a Whitehouse track that you really shouldn’t google). It always struck me as a brilliant bit of marketing, at once embracing and ridiculing musical elitism.

I can imagine this slogan being stamped across a poster for the works of Samuel Beckett, which have a reputation for being sparse and serious and difficult. Theatre for theatre people. Except it’s not. While his plays are sparse and serious and difficult, they’re also funny and irreverent and human. They celebrate the absurdity of life as well as poking a stick into its darkest recesses, and it’s the former that’s brought to the fore in director Richard Jones’ double bill at the Old Vic.

It’s hilariously bleak, the men more concerned with a dodgy desk lamp than they are the inconsequential particulars of yet another life. Cummings and Radcliffe find an easy, quickfire chemistry and it’s over before you know it. This is in stark contrast to the main event, Endgame, during which even the characters eventually implore “It must be finished soon!”

It’s set in the aftermath of some apocalypse, with the last vestiges of humanity living in diseased pockets. Hamm, a viperous blind man whose legs are so emaciated he can no longer stand (Cummings again, with some clever prosthetics), whiles away his time abusing his young, hunchbacked servant Clov (Radcliffe). They never venture from their grim, peeling apartment – the kind of place Joel Golby writes about in his column for Vice – repeating the same mundane tasks ad infinitum, lacking any purpose beyond the vague hope that one day it will all be over. It’s a meditation on futility – “why this farce, day after day?” – a vision of the world ending not with a bang but with the most pathetic of whimpers.

Cummings is delightfully awful, nailing Hamm’s vituperative impotence. Despite some game physical acting, however, the material tends to show up Radcliffe’s shortcomings as a stage presence. There are also small parts for Jane Horrocks and Karl Johnson as Hamm’s elderly parents who, as per Beckett’s notes, have no legs and live in  dustbins – both are superb.

Jones has as much fun as Beckett’s famously prescriptive material allows, but by the end it’s every bit as taxing as you might hope, the repetition slowly grinding you down as you watch the world’s – and the play’s – protracted death rattle. I enjoyed it very much; you won’t like it, sugar.